After a slow burn, Irish workers’ love affair with Canada fires up

Canada will shortly issue a record number of working-holiday visas to Irish people. If recent years are anything to go by, we’ll snap them up 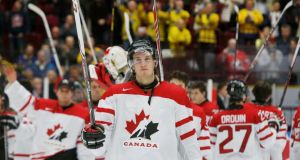 Stick around: Anthony Mantha and the Canadian ice-hockey team salute their supporters after being defeated by Russia in Sweden this month. Photograph: Alexander Demianchuk/Reuters

Ireland’s new love for Canada started as a slow burner. In 2009, at the height of the recession, just half of Canada’s International Experience Canada working-holiday visas (IECs) for 18- to 35-year-olds were allocated. Then word spread that it isn’t just a largely frozen land mass north of the United States but also a fine place to live, with jobs aplenty and a great standard of living. It’s closer than Australia and has a similar culture to Ireland. Today there’s hardly a town, city or prairie untouched by the Irish.

Ireland now gets more IEC visas than the UK, despite that country’s Commonwealth ties to Canada, and the Irish allocation is just a few thousand shy of France’s.

Aer Lingus has announced a year-round direct route, and WestJet is set to operate a direct flight from St John’s, the capital of Newfoundland, to Dublin, which will take less than four hours. Air Canada is increasing its service too.

Sharon Whelton, a 24-year-old from Clonakilty, Co Cork, who has a degree in journalism and new media from the University of Limerick, applied for a Canadian visa in 2012 as a “back-up plan” in case work in Ireland dried up. Now she and her boyfriend, Robert, live in Calgary, in the western province of Alberta. She’s a receptionist with a leading accounting firm; he works as a mechanical engineer

“What’s not to like about Canada?” says Whelton. “The people are wonderful, so helpful and friendly. There is always something to do over here, and we’re very into snowboarding right now, so almost every weekend is occupied with a trip to the mountains, which we’re certainly not complaining about. Summers are also great; typically you get beautiful weather.

“I see my future here in Canada, in the short term anyway,” she says. “It’s hard to contemplate giving up everything that we have here to move back to Ireland and work in a poorly paid job. The aim right now is to secure permanent residency, which will give us a bit more freedom.”

Cathy Murphy, director of the Irish Canadian Immigration Centre, says the IEC is increasingly being used as a stepping stone to permanent residency.

But Canada’s friendliness to the Irish doesn’t sit well with everyone. Audrey Macklin, a professor of law with a special interest in immigration, at the University of Toronto, says the Canadian government is leaving itself open to criticism domestically by giving preferential treatment to one nationality.

“I’m neither for nor against Irish coming to Canada. But if there are lots of qualified Irish out there, and Canada needs more people, why not simply enlarge the quota for the admission of all economic immigrants and let the Irish apply under that?”

Macklin also points out that migrants from countries such as the Philippines and Mexico who come in on temporary work permits find it very difficult to stay permanently in Canada, while it is easier – though not guaranteed – for those with IECs.

Nancy Schaefer, the president of Youth Employment Services, a national agency for unemployed youth in Canada, argues that the government should be investing in young Canadians before looking overseas for workers.

Cathy Murphy acknowledges that young unemployed Canadians might well be irked and says their government should train them. “Canada is starting to train young people in trades,” she says. “The problem is we need a skilled and ready labour force now. There is a gap.”

Well placed
Stephen McLarnon, director of the Working Abroad Expo, says the Irish are well placed to fill that gap. Two Canada-specific expo events will take place in March in Cork and Dublin. Canada’s job offerings are as varied as the country itself, and from the controversial oil sands of Fort McMurray to the seaport city of St John’s there are many opportunities “provided you’re willing to work and willing to work anywhere,” says McLarnon.

He believes Australia has temporarily lost its appeal because of anti-immigration measures brought in by the last government. “Canada is a more open and welcoming society when it comes to immigrants. For those who are serious about starting or progressing their career, head to Edmonton, Calgary, Regina, Saskatoon, Winnipeg or St John’s. In the major migrant capitals of Vancouver and Toronto competition for jobs is tougher.”

There’s no shortage of free assistance for newcomers, either, from the government-funded Irish centre that Murphy runs to a popular online service, Moving2Canada.com, run by a Kerry immigrant, Ruairi Spillane. What started off as a Facebook page for the Irish in Vancouver has grown into a suite of relocation services where new arrivals can get CV tips, travel insurance and even work, as well as the lowdown on food, rent and socialising.

Aiden Connell, a civil engineer, and his wife, Christine, are both 35 and have just moved to Canada. “With little or no prospect of work in Ireland we made the decision to make a new start somewhere else,” says Aiden. Having arrived in Vancouver this week, they say the Moving2Canada service took some of the stress out of the move. They have already had job interviews.

“Our first impression is that the people are very friendly and welcoming. You’re not made feel like an outsider.”

This year’s IEC is set to open any day now, and thousands more Irish visa hopefuls are waiting for it.

The IEC visa: First steps to making a move to Canada
The Canadian department of immigration and citizenship is expected to open the 2014 round for International Experience Canada (IEC) working-holiday visas for Irish citizens shortly. Although a date has not been set, at least 24 hours’ notice will be given at canadainter national.gc.ca/ireland-irlande.
At least 10,000 IEC visas, which allow people aged 18-35 to work legally in Canada with their children for up to two years, will be available this year. The quota sold out within days last January, leading to huge pent-up demand, so this year’s applicants need to be ready to act quickly when the system opens. The IEC has warned that the quota for some countries can be allocated in less than 30 minutes.
Candidates will have to register for a Kompass account on the IEC website before submitting an online application.
A scanned copy of the identification page of your passport and an electronic version of your up-to-date curriculum vitae, which must follow the format provided in a template on the IEC website, will be required, along with a fee of 150 Canadian dollars (€100).
Visas are processed on a first-come, first-served basis. Successful candidates have a year from the date of issue to enter Canada.
On arrival in Canada, you must have health insurance, a return flight or enough money to buy one, and proof of 2,500 Canadian dollars in your bank account.
For details of longer-stay visas for Irish people in Canada, including employer-sponsored work permits, skilled-trades visas and permanent residency, see cic.gc.ca.

'I'd never met anyone from Blackrock before'
8