The Irishman in charge of snow operations in Cambridge, MA

It was bitterly cold last week. I hadn’t heard of the term ‘bomb cyclone’ before that

A powerful blizzard has battered the US northeast, knocking out power for tens of thousands of people amid a cold snap that has gripped much of the United States for more than a week. Video: Reuters 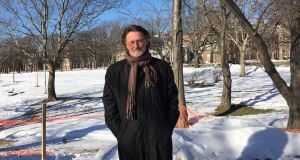 Owen O'Riordan, Commissioner of Public Works for the City of Cambridge, in front of Harvard University

Working Abroad Q&A: Each week, Irish Times Abroad meets an Irish person working in an interesting job overseas. This week, Owen O'Riordan, originally from Banagher, Co Offaly, tells us how he came to be the person responsible for snow operations, in Cambridge, Massachusetts.

Tell us about your background?

As with most graduates in the 1980s, there was a certain expectation that I would have to emigrate. But luckily, I found work, initially with Dublin County Council and spent three wonderful years there, working in the drainage division. Soon after, I moved back to Galway,where I was area engineer in Portumna. While it was very enjoyable, I think my wife Nora and I at that time in our lives wanted to see a little more of the world.

When did you first move abroad?

Nora was offered an opportunity to study in the States, so we spent two years there, where Nora studied at UC Berkeley and then at Boston College. At that stage, we were parents twice over, to Molly and Sam, and given the various permanent visas that were on offer (Donnelly and Morrison visas), we took advantage of the opportunity and decided to take a chance on making a go of it in the States.

We have lived in the Boston area for 25 years and have loved it. We had another baby, Emma, who is our only child to be born here and we became citizens in 2001.

Tell us about your role with the City of Cambridge?

I have worked for the City of Cambridge for the past 20 years. Cambridge is immediately north of Boston, across the Charles River, and is home to both Harvard University and MIT.

I was the City Engineer for the first 15 years of my time there and for the past five years have been employed as the Commissioner of Public Works. My responsibilities involve the management of municipal infrastructure, parks, cemeteries, urban forestry and public buildings.

Our department is responsible for preparing for and responding to weather events, rainfall or snow and ice. My colleagues and I work very long hours in managing the various storms. The management of the most recent snow event has been an around the clock effort for staff here. 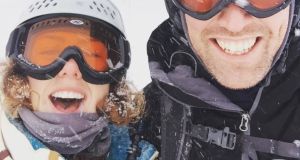 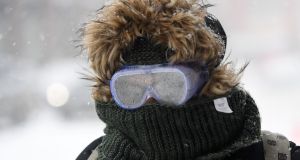 Tell us about the ‘bomb cyclone’.

I hadn’t heard the term ‘bomb cyclone’ until last week. I am used to the term nor’easter which is commonly used here for a cyclonic event that typifies our winter weather. This is where snow, rain and heavy winds swing in off the north Atlantic in a counter clockwise direction, and they generally last about 12 to 15 hours.

It was bitterly cold last week with temperatures remaining well below freezing and this resulted in numerous water breaks and leaks in our distribution system, and very cold office buildings. This was then followed by the heavy snowfall.

We have had hundreds of pieces of snow plowing equipment and snow hauling equipment working on our streets since that time. Our crews worked for 32 hours straight during and immediately after the snow storm and have worked every night since then, hauling snow to various snow farms throughout the area.

Do you think the media hypes up weather events like this, or was it warranted?

We have contracts with private meteorological firms who provide us with detailed information in advance of storm events, with estimates of snow intensities, temperatures, winds and gusts and snow totals. Frankly, we don’t rely on television or radio forecasts, because they are not precise enough for our needs. But also, they tend to add an edge of drama which doesn’t necessarily help us.

Have you noticed the climate change much since you arrived in the US? How has the response to weather events changed?

Climate change is a preoccupation for us here in Cambridge, both in city government and in the community. The City of Cambridge is a low-lying community sitting between two impounded river systems that flow into Boston harbour, the Charles to the south and the Mystic to the north.

Obviously one snow/surge event like that which occurred last week, does not make the case that climate change is becoming more impactful, but two years ago we had a record amount of almost 10ft of snow in the Boston area. Science tells us that in the short term as oceans warm, evaporation will increase, hurricanes will move further north and snow events will become more intense, and so I think that is what we have begun to experience.

What excites you most about your job? What are the biggest challenges?

When I was a young engineer, I really didn’t think about engineering beyond math and science. Now I am older, I see the extraordinary importance that good engineers have in addressing and trying to solve these enormous problems. Obviously, my colleagues and I are working at a relatively modest scale, but I do think our work is important, and has relevance in terms of improving the quality of people’s lives and that’s really exciting.

What is your life in Cambridge like outside work?

We live on the south shore, immediately off the coast (adjacent to Scituate which was absolutely wiped out last week). Nora is a teacher in the local school and Molly, Sam and Emma are now off in college. We are getting used to being alone again, which is wonderful, but there are days when we miss the children (20, 23 and 25 – not really children) being around.

Are you still well connected to Ireland?

Yes, of course. I read the newspaper every morning and tune into soccer and rugby. I used to be a huge hurling and Gaelic football fan, but I am less connected with those sports at this time. My mother and older sister (I have three sisters) are still in Ireland and I visit three times a year . I love going home. I think I can say that the international terminal at Logan airport is one of my favourite places.

I don’t know. We are now in our late 50s and our children are very American. I suppose we think about buying a small place at home on occasions, and spending perhaps half of the year at home when we retire – but who knows.

If you work in an interesting job overseas and would like to share your experience, email abroad@iristimes.com with a little information about yourself and what you do.