Why is Manama in Bahrain the best place in the world for expats? 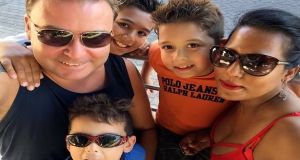 Gavin Lawlor, who has been living in Manama for 16 years, with his wife Dona and their three sons Calum, Oisín and Aidan-Fionn.

Manama in Bahrain has been rated the best city in the world to emigrate to, in a newly published global survey, which ranked Dublin 47th out of 51 cities.

The city scored particularly highly in the survey’s “getting settled index”, with respondents saying they found it easy to get by without speaking Arabic and make new friends, and a welcoming attitude among local people to foreign residents.

Expats in Bahrain also reported higher earnings than the worldwide average, with twice as many (11 per cent) reporting an annual household income of over $200,000 (€170,000).

The Expat City Ranking 2017 report by InternNations.org is based on a survey of 13,000 people, though they don’t say how many respondents participated in each city.

Irish Times Abroad asked some Irish people living in Manama to tell us what it is like. Is it really the best place in the world for expats?

Kate Canty: ‘It’s a great place to live, but I miss the Irish landscape’

I’m coming up to my two year anniversary in Bahrain. People say time flies when you’re having fun but it also goes by fast when everything is new and so different to what you’re used to.

I really didn’t know what to expect when moving here. I’d been to the Middle East only once before for a two-week holiday to visit my sister in Dubai, when we also visited Oman. I didn’t know anyone already living here so it was a leap of faith when I accepted the job offer to work as a physiotherapist here.

I thought it would take me a few months to settle in but it happened a lot quicker. I soon realised most expats were in the same boat as me and were eager to meet new people and forge friendships. In comparison to other capital cities, Manama is quite small, which makes it even easier at the beginning. It can also be one the drawbacks to living here, in that it doesn’t have the variety of the likes of Dubai.

Everything is easily accessible. On my first day in Bahrain, I asked someone how long it would take me to get another area on the island. The answer was 20 minutes, everywhere takes 20 minutes!

The downside is that you usually have to drive everywhere. They’re working on the public transport system here but it still has a long way to go so unfortunately it’s a necessity to have a car. That’s one of the main things I miss about living in Dublin, it’s such a walkable city.

One of the major drawbacks to living in Bahrain is the paucity of natural amenities. There are very few places on the island that you can go for a walk or a run without the constant hum of traffic passing by. For this reason I’m surprised Dublin scored so low in the ranking. Compared to Manama, and many other cities, it has wonderful natural amenities such as public parks. Its proximity to coastal and mountain walks is also fantastic.

Considering my experience of Manama so far, I’m not surprised it scored well but I’m not sure I would have given it number one ranking. It’s a great place to live, but on nice days I miss the beauty of the Irish landscape.

Gavin Lawlor: ‘Manama is a very easy city to settle in’

I am originally from Portmarnock in Co Dublin but have been living in Manama for more than 16 years. I work in the aviation industry.

I arrived here single after a year’s backpacking around Asia and Australia. I came with only a rucksack on my back. If I were to leave today, I’d be bringing a 40-foot container at least, a wife, a gang of kids and a dog.

I met my wife Dona in an Irish bar here, and we have had three sons Calum, Oisín and Aidan-Fionn.

Manama is a very easy city to settle in. The people are very friendly here. It’s not uncommon for expats to have close Bahraini friends, which is quite unique for the Arabian Gulf. There is a large expat community too and close lifetime friendships are forged.

I have been involved with the Bahrain Irish Society with 13 years as a committee member. The society hosts lots of events throughout the year. The St Patrick’s Day Ball is the highlight on Manama’s expat social calendar. The ball is always a sellout event with more than 700 people attending.

This weekend the Bahrain Irish Festival is taking place, from November 16th to 18th, showcasing Irish culture and GAA games. More than 1,100 GAA players will participate and bands from Ireland are flying in to entertain the crowds of people.

While Manama is very different from Dublin, there is something very familiar about it. The majority of Irish expats have been living here more than five years. Many Irish I know have permanently settled, and some now have Bahraini passports too.

The vision of the Bahrain Royal Family has helped develop Bahrain into a beautiful city with modern high rise futuristic buildings alongside traditional Arabic dwellings. Business is flourishing. Expats are appreciated here for their contribution they make to Bahrain society. In all my years here I have never felt unsafe.

Bahrain is tolerable to all cultures and religions. My youngest, Aidan-Fionn, has commenced his First Holy Communion classes with a group of Irish kids.

Women do not need to cover up here; they probably have more rights in Bahrain than in any other Gulf State. Several government ministers are female. Alcohol and port products are widely available.

Several Irish companies are based here too. Aer Rianta has its international headquarters in Manama, while the RCSI, ESB, Genaire and Kentz, to name but a few, also have operations here.

Irish products are widely available to purchases in stores here, from Guinness to Irish rashers to Kerrygold butter. Air connections are good with lots of options to get back home and for friends and family from home to visit.

We feel blessed to have spent so much time here in Manama.