Who are the Irish in Asia? What are their lives like there? 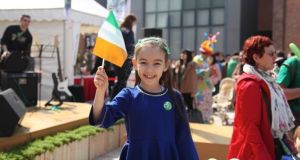 Just over one-third of the people surveyed by the Department of Foreign Affairs about living in Asia had children currently residing with them. Photograph: St Patrick’s Day Parade, Shanghai

Who are the Irish in Asia? Where do they live, why did they move there, and what are their lives like? What industries do they work in, and do they engage with Irish business, cultural, and social networks, or Irish embassies and consulates?

Almost 800 Irish people living on the continent have shared their experiences in a new survey carried out by the Department of Foreign Affairs. Almost one in four were living in Hong Kong and Macau. Seventeen per cent were in Mainland China, 14 per cent in South Korea, and 11 per cent in Singapore, which was “broadly in line with Department estimates” on the distribution of Irish people across the region.

The majority (61 per cent) were aged between 21 and 29 when they left Ireland. 35 per cent indicated they had left Ireland to further their career, while 23 per cent moved for lifestyle reasons. 18 per cent were unemployed in Ireland before they emigrated. Just over one-third had children living with them currently.

Are you an Irish person living in Asia? What brought you there, and what do you do? Where do you live and do you like it? Are you involved with the Irish community there? We want to hear from readers. To share your story (max 300 words), fill out the form below and attach a photograph of yourself if you have one. A selection may be published.

Respondents were generally very well educated, above average for the population in Ireland. 88 per cent had a university degree, while 46 per cent had at least a Master’s. Respondents were evenly spread across the different employment sectors, with two distinct exceptions that stood out: 31 per cent worked in education, and 11 per cent in finance.

“While Irish people clearly work in a wide variety of jobs in Asia the significant numbers working in education and finance clearly reflect the different types of Irish communities and emigrants that are in Asia,” the report found.

Social media was widely used among respondents to stay in touch with home, and with each other, and most kept up to date with current affairs in Ireland.

73 per cent use Facebook, 64 per cent use LinkedIn, 38 per cent use Instagram and 29 per cent use Twitter. WhatsApp and local messaging equivalents like WeChat were also popular. 75 per cent read Irish newspapers and online publications.

There was a very low level of awareness of Government diaspora initiatives, with just 16 per cent of respondents aware that the Government had a diaspora policy, and 12 per cent aware of the Emigrant Support Programme, which provides €11.5 million in funding each year to Irish diaspora organisations around the world.

Nine groups have been supported across Asia by the fund in recent years, including Cultúr Club Hong Kong, the Malaysia Irish Business Group, and Irish chambers of commerce in Japan, China and Hong Kong.

When asked if they planned to move back to Ireland in the next five years, respondents were almost evenly split: 30 per cent are considering it, 32 per cent are not, and 38 per cent don’t know.

Friends and family were the primary motivation to move home, followed by professional factors, and a desire for their children to grow up in Ireland and be educated there.

‘I couldn’t get a job in Ireland. Was it because I’m a different race?’
3