'There are infinitely more opportunities in creative careers abroad' 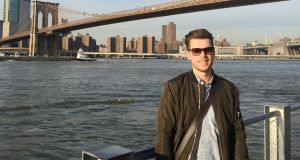 Micheál Masterson from Ashford, Co Wicklow is a photographer and photo editor in New York

Working Abroad Q&A: Each week, Irish Times Abroad meets an Irish person working in an interesting job overseas. This week, Micheál Masterson from Ashford, Co Wicklow tells us about working as a photographer and photo editor in New York City

When did you leave Ireland?
I studied History of Art and Fine Art at NCAD in Dublin. I majored in fine art painting but ended up focusing more on photography as my degree progressed. I left  in November 2016 after finishing my degree, and took the opportunity to move to New York City. I love to travel and I’m always on the lookout to take a trip whenever I have free time. I went to New York on the graduate J1 visa.

Have you done any training or studying in New York?
I interned initially, shooting model profiles for a casting agency in Soho, and new opportunities arose from there. Next I was photographing luxury apartments for a real estate agent and learning to operate and maintain a website for a fashion start-up.

Tell us about your career since.
After some freelancing, I went to work with a jewellery company in the diamond district. I was told I would be covering some shows for New York Fashion Week (NYFW) because their jewellery would be appearing on the catwalk. This was a great opportunity to get to meet some people in the industry and actually attend some big shows. Most of the work for the jewellery company didn’t require me to be in the office, because I was mostly editing and organising future shoots.

I saw a job advertisement for a photo editor for a photography magazine called Musée, applied and got it. I found this to be a great opportunity, as I really enjoyed being involved in producing a publication rather than just submitting work. Also it gave me the opportunity to work a job in the fashion industry, which is something it would have been harder to do in Ireland. Most beneficial for me was that I got to work directly with the editor. She had enjoyed a successful career as a fashion photographer herself,  having been mentored by Richard Avedon and published by Vogue, GQ and Harper’s Bazaar.

What does your day-to-day work involve?
Depending on the day week I could be working the morning from home, or else I’m in the city by 8am on the way to the office. Finishing there at 5pm, I’m either on the way to an art opening to report for the magazine, or organising a shoot or upcoming project.

Do the Irish fit in well there?
New York is full of Irish, for a city of over eight million people. I can’t count the number of times I’ve bumped into someone I know from home. I was in Bryant Park watching an outdoor movie during the summer in a crowd of about 1,000 people when I realised a friend from college was sitting behind me and another childhood friend sitting a few rows in front. In a city like New York, the majority of people are from somewhere else, so everyone was a blow-in at some point. I found people to be so accommodating, they are always introducing you to people and trying to give you a dig out if you need it.

What is it like living in New York?
It’s exhausting, but I’m loving every minute of it. You are always doing something. You could finish work any night of the week and someone will always have heard of something exciting that’s happening. For instance I went to Katie Taylor’s American debut fight and a friend knew her family and we ended up sitting ringside with them in the Barclays Centre.

What is it like living there in terms of accommodation, transport, social life and so on? What are the costs like?
Accommodation is expensive, but I feel that living costs are all relative to the difference in earnings. Everyone is always giving out about the transport in New York, especially the subway, but they don’t realise how good they have got it compared to elsewhere.

In terms of social life New York is second to none. You have endless choices no matter what your plans are, the sights, the galleries and different events. There are restaurants with every cuisine, always some quirky bar to check out that you haven’t been to.

Do you think working abroad has offered you greater opportunities?
Yes, I think most would agree that big cities like London, New York or LA have infinitely more opportunities - especially for those trying to pursue a career in a creative field.

What advice would you give to someone interested in pursuing a career abroad?
Go for it! Moving abroad can be daunting with all the unknowns. But of my many friends who have moved abroad, I haven’t heard anyone say they regret it. Even if you end up trying a different city for a year, I can only imagine it being of benefit to you and your career.

Is there anything you miss about living and working in Ireland?
Obviously I miss my family and friends, but when you get a visit from someone it makes catching up all the more fun. You definitely hold onto your culture more when you’re away. It may be generic to say, but you miss the craic. There is something about the Irish wit and sense of humour you just don’t get in the US.

Luckily I have a few Irish friends here, and we all keep each other in check.