The mark of Lamport: The real Zorro was from Wexford 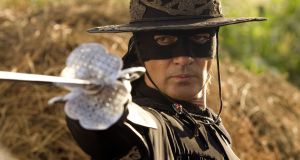 Antonio Banderas in The Legend of Zorro. The character was inspired by the exploits of Irishman William Lamport

Think “Zorro”, and your brain tends to conjure up the image of a Mexican action hero complete with flashing eyes, swishing sword and swashing buckles. So it may come as something of a shock to discover that the real-life figure who served as inspiration for this literary lionheart – immortalised in a series of movies starring such stalwarts of screen machismo as Douglas Fairbanks Jr, Tyrone Power and Antonio Banderas – was actually an Irishman by the name of William Lamport.

Not quite so glamorous and flamboyant, right? Wrong. The story of William Lamport is as outrageous as any Gothic romance, full of unlikely twists and turns, and hurtling towards a dramatic finale.

He was born in Wexford town around the year 1611, the youngest of four children from a noble family which came to Ireland with Strongbow. In his teens he was sent to London to study, but got into trouble with the university authorities for distributing pro-Catholic pamphlets. He ran off with a gang of pirates and ended up in northern Spain where, having joined an Irish regiment and changed his name to Guillén Lombardo, he came to the attention of the Duke of Olivares, the most influential official at the court of Philip IV.

Perhaps because of Lamport’s fluency in a number of languages, Olivares sent him to Mexico in 1640 to spy on the new viceroy, suspected of not being tough enough on criollos who were fomenting rebellion against their Spanish rulers. Meanwhile, Lamport was developing some rebellious sympathies himself; he was particularly outraged by the antics of the Spanish Inquisition, whose local enforcers were not only hugely powerful but highly corrupt.

Alongside these theological and political shenanigans, Lamport found time to get engaged to one of Mexico City’s most eligible heiresses (this despite the presence, back in Spain, of his mistress and their young daughter).

In October 1642 the inquisition caught up with Lamport. He was charged with conspiring against Spain to liberate Indians and black slaves, of being closely associated with witch doctors and astrologers, and of attempting to set himself up as king of an independent Mexico. He was sentenced to burn at the stake.

But Lamport had a powerful protector: another Mexico-based ally of Olivares, the reformist Bishop of Puebla, Juan Palafox. The execution was postponed and Lamport was sent to prison where, over a period of 16 years, he produced several treatises in Spanish, as well as a memoir and 900 psalms in Latin, many of the latter written on his bed-sheets.

When Palafox became very ill, however, the inquisition swooped in, and Lamport’s execution was scheduled for the auto-da-fé of November 16th, 1659. Defiant to the last, he grabbed the rope with which he was tied to the stake and managed to hang himself before the flames were lit.

Because his name languished unrecognised for years in the archives of the Mexican inquisition, the details of Lamport’s extraordinary life have only recently been unearthed by Spanish and Irish academics. Within Mexico, however, he was remembered as a kind of Robin Hood who supported the Indians and the underprivileged.

In 1872 a retired Mexican general wrote a historical romance in the style of Dumas’s The Three Musketeers. Its hero was called Guillén Lombardo; the narrative followed Lamport’s exploits closely, down to the use of chunks of the evidence he gave at his many encounters with the inquisition. The author, a Freemason, used the letter “Z” to symbolise the divine spark in the human and when, in 1919, an American journalist called Johnston McCulley reworked the story, he gave the character a new name. Diego de la Vega, aka Zorro, was born.

It’s hard to sort truth from fiction in the story of “the Zorro of Wexford”. One thing, however, is for sure: on a roundabout in downtown Mexico City, a massive victory column known as The Angel marks the country’s famous Monument to Independence. Just inside the entrance is a statue of William Lamport. He looks dreamy and quizzical – not unlike another Spanish literary anti-hero, Don Quixote. But then so might you, if you were tied to a stake on a Spanish Inquisition bonfire.