Irish connections: William Bourke Cockran represented the US all over the world but is barely remembered in his home county of Sligo 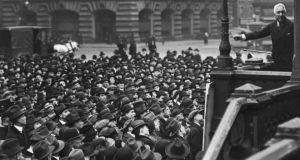 On the corner of Fifth Avenue and 58th Street in Manhattan, roughly where Apple’s flagship Fifth Avenue retail store is located today, once stood the home of perhaps the most famous Irish-American you’ve never heard of.

William Bourke Cockran was a successful New York lawyer and politician regarded, in his day, as the United States’ greatest orator. He was a trusted adviser to three US presidents and a friend to men of the calibre of Thomas Edison, Joseph Pulitzer and Mark Twain. Years after his death Winston Churchill recalled, “I have never seen his like, or in some respects his equal.”

Yet, according to a commemorative booklet published recently by the William Bourke Cockran Foundation in Sligo, this remarkable statesman’s name “has long since been forgotten in his native county”.

William Bourke Cockran was born to a well-off farming family in Carrowkeel, Co Sligo, in 1854. He was gifted academically, and his potential was spotted early by Archdeacon Terence O’Rorke, of Collooney, who arranged for the boy to study in France.

When he returned to Ireland Cockran met the barrister Isaac Butt, founder of the Irish Home Rule League, who inspired his interest in law.

At the age of 18 Cockran sailed for New York, where he found work at a Catholic private school. Here he was spotted by Abraham B Tappan, a judge of the New York supreme court, who offered him study access his private library.

In 1876, less than five years after arriving in the US, Cockran was accepted to the New York Bar.

By the time he was 40 Cockran was a Democratic national congressman, with a private legal practice worth $100,000 a year, or about $2.5 million today. He had a home on Fifth Avenue and a 300-acre estate on Long Island. He was an advocate for civil liberties, trade-union rights, free trade and Irish home rule.

His wealth meant he was outside the control of Tammany Hall, the city political machine, with which he found himself in constant conflict.

As a polymath and a showman Cockran was renowned for holding crowds’ attention for hours at a time, using neither notes nor electronic amplification.

In 1895 he met the recently widowed Lady Randolph Churchill in Paris, and they had a brief affair. They remained friends. That same year, the socialite’s 20-year-old son, Winston, passed through New York en route to Cuba, where he was to cover the island’s war of independence for the Daily Graphic. (It was during this trip that Churchill acquired his lifelong taste for Cuban cigars.)

Cockran invited the young man to stay with him as a house guest. According to Michael McMenamin and Curt Zoller’s book Becoming Winston Churchill: The Untold Story of Young Winston and his American Mentor, the future British prime minister had never enjoyed a warm relationship with his late father; in Cockran he found a mentor: the Irish-American recognised Churchill’s potential and nurtured his ambitions of a political career.

As a statesman Cockran represented the US all over the world. But it was the cause of Ireland that remained closest to his heart. He contributed to the Irish Relief Fund, the Land League, the Gaelic League and the home-rule movement. He befriended and advised, among others, Michael Davitt, Douglas Hyde, Patrick Pearse, Éamon de Valera, Roger Casement, Lady Gregory and WB Yeats.

In the aftermath of the Easter Rising of 1916 he told a sold-out meeting at Carnegie Hall that “these men who have died” in Dublin “were the apostles out of whom a new civilisation is to spring”.

Cockran died in 1923. Two decades later, in 1946, Churchill paid tribute to him in his Iron Curtain speech in Fulton, Missouri. He recalled “words which I learned 50 years ago from a great Irish-American orator, a friend of mine, Mr Bourke Cockran: ‘There is enough for all. The earth is a generous mother. She will provide, in plentiful abundance, food for all her children, if they will but cultivate her soil in justice and in peace.’ ”

William Bourke Cockran is buried in the Gate of Heaven Cemetery in Hawthorne, New York, close to his fellow Irish-Americans Jimmy Cagney, the actor, and Dorothy Kilgallen, the journalist who wrote the long-running Voice of Broadway gossip column.