‘The Bad Times’: Visualising the Famine in a graphic novel 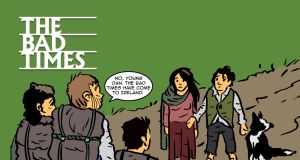 In Ireland, children and the aged accounted for one-third of the Irish population in the 1840s, but three-fifths of the deaths.

How to name the Great Famine? For some people, especially Irish-Americans, even using that phrase is an anathema; they prefer the term The Great Hunger. For those who lived through and survived the tragedy, they more usually referred to those years as “the bad times”, or, in Irish, “an droch shaol”.

However we label it, what happened in Ireland from 1845 to 1852 was part of a long continuum of subsistence crises. This one proved to be longer and deadlier than the famines that preceded and followed it. Yet in 1845, and even in 1846, few Irish people realised they were about to undergo one of the most lethal famines in history. How can we capture and convey their experiences nowadays, and do so in a way that is authentic yet accessible?

In any famine, children are one of the most vulnerable groups. In Ireland, children and the aged accounted for one-third of the Irish population in the 1840s, but three-fifths of the deaths. Yet scholarly writing on how children suffered, survived or perished during the tragedy of the Great Hunger remains sparse to non-existent.

In contrast, women and children are prevalent in visual representations of the famine and they feature prominently in works of fiction, especially children’s literature. In regard to the latter, this is perhaps best represented in the writings of Marita Conlon-McKenna, author of Under the Hawthorne Tree.

The Bad Times, which I wrote in collaboration with and artist John Walsh, is aimed at children and young adults, but it uses the medium of a graphic novel. In deciding to use visual imagery to drive the story, we wanted to reach a younger generation of readers who have high levels of visual literacy.

But The Bad Times is also suited for general readers of any age. Graphic novels used to have only a niche following, but increasingly they are being used in the classroom - both in schools and universities - as an accepted part of the curriculum. Educational institutes that have used The Bad Times as a teaching resource so far include teenage pupils at a community school in Tallaght in Dublin, and undergraduates studying the Famine in St Michael’s College in Toronto. An Irish language version of the book, An Droch Shaol (published by Coiscéim in Dublin) has been used by students learning Irish in the US.

The Bad Times tells the story of three young teenagers, who live in Kilkee in Co Clare, an area that suffered one of the highest levels of mortality during the Famine. The children, and their respective characters, are based on a painting by Irish artist, Daniel MacDonald, entitled ‘Three Peasant Children’, thought to date from 1846, and currently on display at the Coming Home exhibition of Famine-themed art in Dublin Castle. Little else is known about these children but, given the date in which it was produced, the inevitable question is - how did these children fare during the Famine? Did they survive? And can love and friendship endure during a sustained period of suffering and starvation?

The Bad Times follows the fortunes and misfortunes of Dan, Liam and Bridget as they undergo the consequences of the failure of the potato. It commences at Lughnasa in 1846. The people have survived one year of shortages and as they celebrate the new harvest, they are hopeful that it will be healthy and large. Of course, it isn’t. In 1845, approximately 40 per cent of the potato crop was lost to blight. In 1846, the loss was almost total.

The unfolding tragedy is seen through the eyes of the three children and their families. A number of the other characters who feature in the novel are real characters - the local parish priest who we know was a supporter of Daniel O’Connell; the Quakers who visited the area to set up a soup kitchen; and the local landowner, Colonel Vandeleur, one of the most ruthless in the country in regard to evictions.

One addition to the narrative is a collie, Cú, Dan’s devoted dog who never leaves his side until … Sorry, no spoilers. But this leads to more questions. How do animals survive during a period of famine? We know from the eye-witness accounts of Asenath Nicholson and others that people ate dogs and dogs ate people. What would you do to survive during a famine?

Christine Kinealy will be speaking about The Bad Times and the challenges of writing a graphic novel at EPIC The Emigration Museum on 19th April. Tickets cost €5 and are available at eventbrite.com. Professor Kinealy is director of Ireland’s Great Hunger Institute at Quinnipiac University. She has written extensively on the Great Famine and is an editor of Children and the Great Hunger (Cork University Press, 2018) together with Jason King and Gerard Moran.

Paul Flynn: ‘I still have all my old menus. One dish stands out: bang bang chicken’
Real news has value SUBSCRIBE