Son of Leitrim emigrants was a supporter of addicts, the homeless, and 1980s Aids victims 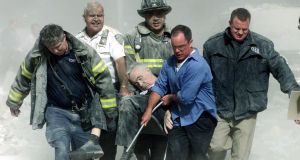 Often, Irish identity abroad is linked to a number of accepted traits. At times, this idealised identity has not seemed flexible enough to contain different lifestyles. One man who unified the many disparate tenets of Irish-American identity was Father Mychal Judge, a Franciscan remembered not only for his death at 9/11, but also for his open-hearted approach to the poor and dispossessed.

Judge was the son of immigrants from Co Leitrim. Growing up in poverty in Brooklyn during the Great Depression, he watched his father die a slow and painful death from mastoiditis, a condition that can develop after untreated ear infections. Shining shoes outside Penn Station as a child, he would visit the Franciscan Friars at St Francis of Assisi Church. His vocation came from his observation of their simple way of life.

At the age of 15 in 1948, after studying with the Franciscans at the St Francis Preparatory School, he began the process of joining the Order of Friars Minor. He was ordained in 1961, and spent the following decades serving communities in Boston, the Bronx, New Jersey, and finally Manhattan.

Judge was a man who encompassed a number of seeming contradictions. He was not a typical priest. From 1971 to 1978, he struggled with alcoholism, battling his addiction with the help of Alcoholics Anonymous. He was gay, a fact known only by a number of his closer friends. Judge synthesised his experiences in order to access a spiritual empathy that allowed him to reach out to the poor and the dispossessed when they needed it most.

He was a peacemaker. In 1986, when Detective Steven McDonald was shot in Central Park by a youth and left paralysed, Judge prayed with the victim and later brought about a reconciliation between the two. Judge and Detective McDonald became lifelong friends and visited a number of communities going through processes of reconciliation, including Northern Ireland and Sarajevo.

He was a stalwart supporter of addicts, the homeless, and victims of the Aids crisis in the 1980s. As a member of Dignity, a group who advocate for change in the Catholic Church’s attitude to homosexuality, he set up an Aids ministry and welcomed them to St Francis of Assisi church in contravention of the church’s ban. Judge spoke about his sexuality with his closer friends, but remained celibate.

In 1992, he became chaplain to the New York Fire Department, a role he relished. He was often first on the scene in cases of tragedy. In 1996, when TWA Flight 800 exploded shortly after takeoff, he ministered to the families and arranged a memorial. He brought coffee and blankets to Chinese immigrants washed up on Rockaway Beach. And on September 11th, 2001, he was among the first on the scene when the Twin Towers were struck.

Poignant footage of the tragedy as captured in activist Brendan Fay’s tribute documentary Saint of 9/11, shows Judge in his priest’s collar and fireman’s uniform, praying, his face stricken with pain and bewilderment. He died soon afterwards in the North Tower, struck by debris as the south Tower collapsed. He was administering last rites as he died, and praying: “God, please end this.”

Perhaps Father Mychal Judge’s greatest achievement is the example he set to others by his deeply human story. Here was a man whose life was not without adversity, whose personal story did not always fit accepted ideas of Irish-Americanness. And yet, in living as he did, he has changed that narrative, and become one of the most beloved members of our global diaspora.

When, during the Aids crisis, Judge was called to anoint a dying man, the man asked him “Do you think God hates me?” Judge cradled the man in his arms as he passed. This Pieta-like image was to be replicated in the now famous photo of fire fighters carrying Judge from the North Tower.

There are many words to remember Father Mychal Judge by, but perhaps most apt is his question: “Is there so much love in the world that we can afford to discriminate against any kind of love?”

This Extraordinary Emigrants article was written by Jessica Traynor, deputy museum director of Epic The Irish Emigration Museum (epicchq.com) in Dublin’s Docklands, an interactive museum that tells the story of how the Irish shaped and influenced the world.