Lola Montez, the Irish 'Spanish dancer' who horsewhipped her enemies

Renowned for her beauty and her temper, Lola caused trouble in Europe and America 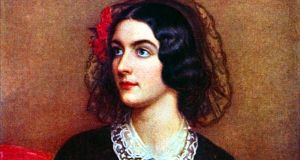 Lola Montez took orders from nobody, be it her mother, her husband, a king, or society in general. Cross this “Spanish dancer” and you faced a horsewhipping. She was born Eliza Gilbert about 1820 (her gravestone says 1818 in Limerick, her baptismal cert 1821 in Sligo), the daughter of Edward Gilbert, a British soldier serving in Co Cork, and Eliza Oliver.

The young Eliza accompanied her parents to India, although she was later sent abroad to be educated, first to Scotland, and later Paris and Bath. Her beauty and temper developed in parallel, and in 1836 her mother planned to marry her off to the 64-year-old adjutant-general of Bengal. Eliza promptly eloped to Ireland with a soldier on leave, Capt Thomas James. She married him in Co Meath in 1837.

They returned to India but she did not settle into colonial life, and the marriage collapsed. She headed home to England, having an affair with a fellow passenger on the journey. James sued for divorce, and a decree was granted that did not allow either party to remarry.

Deciding on a career on the stage, she took lessons in dance before making her debut at the Haymarket on June 3rd, 1843 as “Lola Montez”. A spurned suitor led a protest against her, cutting short her London career, and she moved to the Continent, where her notoriety grew.

In Germany she assaulted a policeman with a horsewhip, and this episode entered “Lola Montez” mythology - in later years she always carried a whip, frequently using it.

In Paris in 1844, she had numerous affairs, with, among others, Franz Liszt, Alexandre Dumas, and editor Charles Dujarier, who was killed in a duel in 1845. After the trial for Dujarier’s murder, where Montez asserted she would have been happy to fight in her lover’s place, she pursued Liszt to Bonn, where she demanded entrance to a male-only banquet, danced on a table, and caused general consternation.

She arrived in Bavaria in September 1846 and soon made a conquest of the elderly king, Ludwig I, signing herself proudly as the king’s mistress. The bewitched king made her Countess of Landsfeld in 1847, but she was resented by Bavarian society, whom she had no qualms in offending, and riots broke out against her in 1848. The growing weight of hostility became intolerable; Ludwig expelled her from the country on March 17th, and abdicated a few days later.

Returning to England, she took a second husband, George Trafford Heald, a cornet in the 2nd Life Guards. She was arrested for bigamy, but they fled to the Continent, where the marriage soon ended.

She moved to the US in 1851, dancing, and performing in a play which gave a self-serving account of her time in Bavaria. She took on a third marriage (Heald drowned in 1850), to Patrick Purdy Hull, owner of the San Francisco Whig, giving her name as Maria Dolores Eliza Rosana Landsfeld Heald. This marriage also ended quickly, and in 1855 she toured Australia with mixed success, before returning to the US in 1857.

By now she was in her late 30s. She reinvented herself once more, as a lecturer, speaking on her life and heroines of history. She returned to Ireland in 1858, speaking in Limerick and Cork, with a final lecture in Dublin, “America and its people”. She toured Britain before returning to America in 1859. She suffered a massive stroke in June 1860 and died on January 17th, 1861 in New York.