Slumber at sea is elusive when your bed is constantly, incessantly moving 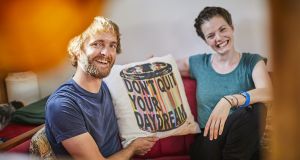 Claire McCluskey and her partner Nick are sailing back from the Caribbean to Ireland. This is part four of her Diary from the Sea.

Imagine this: you’re exhausted at the end of a long day, and are climbing gratefully into bed. All you want is to let go into a deep, restful sleep… but there is a real danger of your bed drifting away, off out to sea (if you’re lucky) or, more likely, into large, jagged objects, like other boats or rocks.

Sleeping at sea can be a challenge; even at anchor, you must always keep one ear alert for shifts in wind, or the noise of an anchor drag. On overnight passages, you’re disrupted by night watch routines, the cold and the damp, and your bed constantly, incessantly moving.

It has been about eight months now since we have had a good night’s sleep on land, when we left Ireland last September. So, in order to survive, sleep is a skill we’ve had to develop. I find naps are key - and resting is easier in the middle of the day when others are awake and bound to notice approaching dangers.

It was from one such daytime snooze on the saloon couch that I was awoken by a resounding thump that pitched the boat to the side, leaning it over ever so slightly further than usual. It was a bit of a jolt, though not too alarming; we had been expecting this, after all. The winds had been steadily building all day and the gale we were waiting for had now officially announced its arrival, sending a big wave - smack! - into the side of the boat.

We were all prepared, with our sails reduced and everything properly stowed. From that point we switched over to a double watch system, each of us taking turns steering the boat for two hours, followed by two hours on support watch, then four hours off. It was rigorous.

In heavy weather, once the sail area is reduced to protect the rig, the main danger that remains are the waves. To capsize a boat, all it takes is a breaking wave, higher than the boat is wide, to catch it on the side (or, to put it nautically, on the beam.) The keel of a boat is unthinkably heavy (in an anxious moment once, I was told to imagine a double-decker bus tied to the underside of the boat) so it very difficult to knock one over, but even so, a big breaker can be sufficient to send the whole expedition head over heels. And that’s an ultimate disaster.

So, in such conditions, you must make sure to always keep the boat pointed in the same direction as the waves are travelling, ensuring they catch you on the back quarter or stern of the boat.

The waves we had chasing us that day were coming at around five to six meters high. Fortunately, due to the timing between them, we were probably not in any real danger of being tipped over. That being said, I wasn’t too keen to catch any on the side of our four meter wide boat.

Excitement kept us going, but it was hard work too. Steering the boat down the waves requires attention and muscle (and I would like to take this opportunity to point out once more that we do not have an autopilot!). The waves have a habit of shoving the stern around, making it a wrestling match to keep the boat pointing in the favourable direction. Navigation to your destination takes a back seat, as there is no scope in these conditions to choose in which direction you go; you just hold on and go. And, oh, how we went.

Rogue Trader is a heavy enough boat (fully packed weighing in at around 19 tonnes) so speed is certainly not what she was built for. We joined a rally, the Atlantic Rally for Cruisers, for our last crossing from Europe to the Caribbean, which was like an informal race. In our division we beat only three boats; one incurred a hefty time penalty for motoring, one was dismasted, and one sank (don’t worry - everyone was ok. But the news came as quite a shock to us at sea!).

We are used to plodding along at 5-6 knots and try not to get disheartened when other, lighter boats zip past us. Imagine our giddy delight then, as we tore down these waves, our speed over the ground reaching up to 12 knots.

Thankfully, about 24 hours after that initial thump, the wind had decelerated to a point that we knew the worst had passed over, and the waves began to mellow. We returned to our regular watch system, and in turn fell gratefully into our bunks. Sleep came easy this time.

But what a spin it was. In those 24 hours, we set a new Rogue Trader record, managing a distance of 170NM. The wind and waves, thankfully, were going our way, so even though navigation went out the window, we found we had been flung exactly in the direction we wanted to go.

We were now 200NM away from the island of Faial - a comfortable two day sail. Two days that is, with a bit of wind. But as the low pressure blast we had hitched a ride on passed us by, blowing off into the sunset, the wind was starting to fade, threatening to leave us, once again, becalmed.

Claire McCluskey is writing a weekly diary from the sea for The Irish Times for the duration of their journey. Follow their progress at facebook.com/sailingroguetrader