In Australia I’m regarded as Irish, but in Ireland I’m ‘not from here’

The older I get the more I realise that, wherever I am, west Clare will always be in me 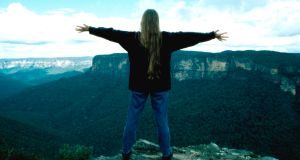 Down under: Anne Casey in the Blue Mountains in Australia. Photograph: John Kelly

This year marks an uneasy halfway for me, I have been in Australia for as long as I lived in Ireland. So where does that leave me? The truth, I have come to realise, is somewhere in between. In Australia, I am regarded as Irish. My accent, parlance, even my “writing voice” are often differentiated as such. My phraseology has been described as “quaint”. How flattering. Last year, an Australian editor asked me to amend some “old-fashioned” turns of phrase in an article. I inquired if a writer of another nationality would be asked to edit out their ethnicity.

Meanwhile, in Ireland, my warped accent and Australian intonation mark me out as not, or at least no longer “from here”. Several years ago, I started thickening up the Irish accent on my return each time after a taxi-driver added €60 to a trip from the airport. Ah jayzus lads . . . I am actually from here! But having spent half my life Down Under, I still have to forage around to dig up “mangetout” and “aubergine” from some forgotten pantry in my mind whenever I see snow peas and eggplant.

Despite the betwixt and betweenness, I do realise how incredibly fortunate I am to have had the choice to make my home in the Lucky Country. Two years ago, I wrote about the many forms of loss you experience as a migrant, even as a self-imposed exile: ‘Returning from Australia, I barely recognise my hometown’ in The Irish Times. I noted I could walk the length of the main street of my little hometown and not recognise a soul. I described how I had turned to poetry and writing in dealing with grief and loss. I couldn’t have realised then the impact of putting those words out into the world.

There were hundreds of responses to that article, via the newspaper, social media, my website, email . . . But the most moving response came in the least expected way. After the article was published, I had returned on one of my “annual pilgrimages” to west Clare. I was again walking down that same main street of my hometown of Miltown Malbay when I heard “Anne! Welcome home.” A sudden hug. A girl from school, whose parents had had a shop just along the street from my family. And that was just the start.

A classmate in the supermarket: “I saw your article in The Irish Times. How long are you home for?” An old acquaintance of my father’s in a doorway . . . People I had lost touch with. A once-close friend who had returned to our old secondary school as a teacher. And suddenly there were people connecting via Facebook. A whole town it seemed, possibly some touched by the loneliness of my article, others just stumbling onto the Miltown link. There are no words for the unadulterated joy of being proved so utterly wrong.

And on it has gone. Last year, I had the added happiness of reading poetry in the company of three singers from my home area, the wonderful Three Women Sing (Anne Rynne, Shona Blake and Claire Watts). Miltown has long been known for its music. Amongst my earliest childhood memories is peeping out of my parents’ bedroom well past midnight. Between the distant, darkened shoreline and the lace curtains was a street alive with set dancers. The strains of fiddle, accordion, whistle and uilleann pipes had woken me. The leaping chords of traditional music overflowed the lounge bars and community hall, finding their way into living rooms, hallways and doorways, and spilling out onto the footpaths.

A tribute to the late great uilleann piper and native of Miltown which bears his name, Scoil Samhraidh Willie Clancy is a week-long summer school and festival celebrating Irish traditional music and dance which takes place each year in early July. Now in its 47th year, even in my childhood years it attracted thousands of international visitors. An influx whose anticipation could be seen throughout the month of June in the shape of ladders and paintbrushes being applied from one end of the town to the other. Rain, hail or shine, “Willie Week” went on unperturbed.

In my own experience, the only difference the weather made during this one week of the year was whether there were Aran jumpers, raincoats and umbrellas or teeny-weeny polka-dot bikinis strung from the awning outside my darling late mother’s shop. A hub for the exchange of local news at other times of the year, this establishment was in the thick of the action for that one week of July. My legs would be run ragged up and down the stairs to stockrooms in search of other sizes of Dunlops, tweed caps or mackintoshes. Much prized by my father still is a guestbook featuring comments from visiting luminaries including the late, much-loved Nuala O’Faolain, and Christy Moore (“Thanks for the great fit!”).

And so, it was with a hint of disbelief that I found myself recently invited to come and read poetry at this very distinguished festival in July 2019. This surprise arrived via email from a former schoolfriend, Deirdre Vaughan, together with local master singer-songwriter and musician Tim Dennehy, and the festival administrator Harry Hughes. It appears my earlier assertion about alienation from my hometown is now destined to be publicly disproved!

Long before I had ever thought of hopping on a plane to Australia or written a single word that would be published, I had received enthusiastic encouragement in my writing from my secondary school English teacher. So, it seems that more than one circle is being completed, as that same person, Harry Hughes, will launch my second poetry collection, ‘out of emptied cups’ (Salmon Poetry 2019) as part of this year’s Scoil Samhraidh Willie Clancy. To my great joy, acclaimed local poets Eleanor Hooker and Patrick Stack will also be joining in with readings from their own books.

As I journey back this year, I will come to a point on the road that I have travelled more times than I could ever number. Coming home from college in Dublin, my father would collect me from the train or bus and on the road home, he would always say “Look now and what do you see?” As we topped the last crest, there it would be laid out before us – the first glimpse of my beloved west coast of Clare. It is a sight I now share with my husband and children returning “home” each year.

Last year, as I walked along the foreshore in front of our family home, I spotted three large fish circling and popping their heads up repeatedly. When I got back to the house, my father confirmed they were salmon – looking for that first sight of home after a long journey.

And so, even though I may sometimes forget to call eggplant “aubergine”, and these days my voice may rise a little too much on the end of sentences that are not questions, when I think of west Clare, I realise that, no matter what, I will always be “from there”.

A native of Clare, Anne Casey is an award-winning Sydney-based poet and writer. Her second poetry collection, out of emptied cups, is published by Salmon Poetry this month.

I will arise and go

My people are an itinerant tribe
A heathen spirit tamed
Not by bonds or shackles or shekels
But by music and by elegant words
Though alongside our wanderlust
Cohabits a want in us –
That surges in each nomad breast –
To journey back again, top the last crest
To that first wide view
Across a childhood shore