Returning from Australia, I barely recognise my hometown

At times like this you realise no technology can bridge the gap of 13,000 miles 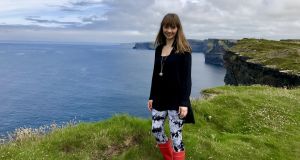 Anne Casey: “My hometown has changed so much I barely recognise it. I can walk the length of the street I grew up on and not recognise a single soul”

When at 18 or 20 years of age, or in my case 24, you fly away on the adventure of a lifetime, you aren’t thinking of your future self. When I first winged my way to Australia, I had no inkling where it would lead. Or all the losses it would lead to. For me. For my future husband. For our future children. For our families.

Swooping in over Sydney Harbour for the first time more than 20 years ago, I had an overwhelming sense of belonging. It is a feeling I have never since shaken. Australia has been very good to me. I love the sunshine and the hustle of Sydney. Career opportunities came my way. Work and travel happily mingled. I have found love and made great friends here.

In those early years as a single person living in Sydney, from time to time I experienced the toll of loss due to the distance. My grandmother died. We had been close. I wasn’t told until it was too late to travel home for the funeral. It was meant as a kindness. I was devastated.

A cousin was getting married. I never got an invite. And another cousin. And another. I became the easiest number reducer. Distance the most convenient excuse. News from home started to dig small holes in my heart.

But I was young and I loved living in Australia. It never crossed my mind to move home. Each year, travelling back to my native west Clare, I would notice the little things that had changed. Time slowly chipping away at my childhood haunts. A slipping away of faces, places and traditions. Starting to lose track of old friends.

When I eventually settled down it was with an Irish guy met through work in Sydney. Neither of us realised at the time what we were signing up for. There was the big one – where to get married. We chose Ireland because of family, automatically excluding a lot of our Aussie friends.

It wasn’t until we had our first child that the little holes started to fracture. After a difficult birth, my husband was left literally holding the baby. Alone for hours until I was safely out of recovery. It would be another four months before a single family member on either side met our firstborn. Tiny fissures forming. Of our own making, of course.

A christening in Ireland, again eliminating our Australian friends. But this time we were wise to it. We had a baby blessing in Sydney. International inclusiveness.

Another close relative dying and no hope of getting home in time. Crack. Visits home so often accompanied by the inevitable question, “Would you ever think of coming home?” Tentative. Half apologetic. Incensing. Guilt-ridden. Like so many other emigrants, the heaviest weight in my baggage was my mother’s broken heart. Crack, crack, crack. 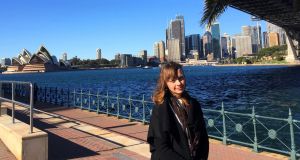 My mum would ask, ‘Would you ever think of coming home?’

There is a scene that replays over and over every year. Me hugging my father in the hallway. Tears as I greet him for the first time in a year. The same scene mirrored a week later as we say goodbye for another 12 months. It is like a kind of Groundhog Day torture. But then we just carry on. What else would you do?

A second child. Midnight phonecalls with my ailing Mum starting soon after his birth. Crack, crack. Escalating into nightly calls with my parents and a stream of baffled doctors. Culminating in the inconceivable news that my Mum had pancreatic cancer.

A flurry of internet searches spat out the unthinkable – it was almost certainly terminal. A small ravine opened up. It is at times like this you realise no technology can bridge the gap of 13,000 miles. There are times when you just have to be there.

So we bundled up our six-month-old and two-year-old and flew as fast as a Boeing 747 could carry us. And for a while, it became all about hospitals and treatment options. Until the options ran out. And then it was about pain management and survival. For all of us.

My husband had to return to Australia for work. He missed so many things over the ensuing months – first crawling, baby talk, first standing. A series of unrepeatable firsts. All the while we knew there would also be lasts. We never knew how long Mum would have. But we were determined to squash all of the lost years into whatever time we had. And we did.

We blew out our youngest’s first birthday candle by her bedside four days before Mum breathed her last. And for all the awfulness of those six months, there was love and joy and meaning. And most importantly, absolutely no regrets.

It has been 10 years. And there are still so many losses. Our children’s birthdays, First Communions, school concerts and the dreaded Grandparents’ Days marked always in the absence of family. Always the empty chair. Travelling home to find the cracks keep on going. The oldies keep getting older. And frailer. For a while there someone seemed to die every time we went home.

My hometown has changed so much I barely recognise it. I can walk the length of the street I grew up on and not recognise a single soul. The sense of displacement is alarming at times. But the friends I meet who know me seal the void of all the intervening years. And the joy of seeing my children run wild on the strand I ruled as a child fills the cracks in my heart to overflowing.

Somewhere along the line, I found that writing poetry helped me to make sense of it all. It helped me to process my guilt and grief. It gave me a place to hang on to all the lost things. Somewhere I can turn them over from time to time.

If I could go back and somehow explain it all to my 24-year-old self, would I do anything different? Probably not. I think that’s the most important thing in the end. No regrets. To find the tally of gains from all your losses is the greatest part of yourself.

Originally from Clare, Anne Casey is a writer living in Sydney. 'Nowehere People' and 'Homing' are extracted from her debut poetry collection Where The Lost Things Go, published by Salmon Poetry

Nowhere people
...when everyone’s laughing
but you missed the start
because you came
from somewhere else

A stranger now
In a strange land
This street my feet had pattered
Through all the years that mattered
In between the ghosts
Of fallen heroes
The smoke of burnt out fires
Monuments to the ruins
Of dreams and desires
Past facades masking
Tattered insides
All the laughing, skipping, dancing
Hauling, falling length of it
A street baptised in people’s lives