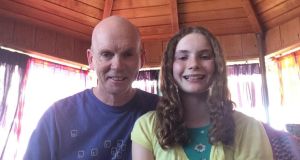 Philip Lynch with his daughter Molly: ‘I’d like to go down here and offer her some encouragement, but she’s already told me she doesn’t need my guidance as she’s seen several YouTube clips, and she knows what to do.’

She’s out there again in her now almost too small Arsenal top that she got last Christmas. This drizzle won’t faze her. But, for all that, she cuts a solitary figure in the middle of a paddock in Tasmania, surrounded by bracken, and with only the drone of a chainsaw in the distance to keep her company.

Watching her out there, reminds me that her single child status is light years away from my own crowded childhood in Ireland. Every chance we got, my brothers and I would be out in the back field, jostling for the ball, and sliding and hacking into each other like every contest was a matter of life or death. None of us were any good but that didn’t stop us from trying to re-enact the heroics of Frank Stapleton or Kenny Dalglish. Even though the long shadow of the GAA was ever-present, we also had our bible of English soccer, Shoot magazine, which was available in the local newsagent’s in Castlepollard.

On those rare and fleeting occasions when our old man came out and joined in, we couldn’t have been happier. For once, he wasn’t immersed in the newspaper or attending to some chore. He was acknowledging our world. Despite his middle-age and lack of pace, the old man still had some moves, but his work boots always marred his efforts. Too soon it always seemed, he was away to do something that needed his attention.

He’s long gone, and the house and field are gone too. They were sold off, back in the boom - to a couple from Dublin - to offset the cost of my parents’ life-long ambition, their new bungalow. To my mother’s chagrin, the front door of our old house was painted canary yellow, but one significant improvement, which I don’t think she would’ve minded, was the installation of a gable window, which opens up a clear view of the hill of Maol, a mile or so away to the east. A concrete picnic setting appeared on our once well-trodden pitch; a genteel setting which always struck me as being out of place whenever I went home to visit.

I watch at the window, mug of coffee in hand, as our would-be Messi strives to keep the ball airborne with limited success. It’s a stop-start affair. She manages successive kicks until a wayward effort sends the ball spiralling out of her range. But, barely pausing, she retrieves it from the bracken and begins again. Her coach has told her only 3 per cent of kids will make it to an elite level, so she knows she can ill-afford to get carried away. I’d like to go down here and offer her some encouragement, but she’s already told me she doesn’t need my guidance as she’s seen several YouTube clips, and she knows what to do. Old fogies like me can’t compete with slick YouTubers who have legions of devotees hanging on their well-honed monologues. Anyway, there’s the drizzle, and dirty dishes in the sink. Being inside feels like a better option.

For a long time, I never imagined I’d be a father. On the threshold of my adulthood, I was uneasily sequestered in a seminary. I thought I was destined for the African Missions. I’d imagined a life on or near the equator in some rural setting, perhaps with a housekeeper and an attentive congregation. But after two angst-ridden years, that dream was done. After I left Ireland, I stayed single and solitary for so long that even my mother had given up. I kept myself busy, working and studying. Often, like some kind of bit character in a sitcom, I found myself filling my self-appointed role as a foil for my friends in long-term relationships.

Before I realised it, I was nudging towards middle-age, and by the time I eventually met my wife, we’d already arrived in the absolute last chance saloon of parenting. But that’s all ancient history now, and tomorrow’s soccer star, down there getting soaked by the drizzle, has long since abandoned her plaintive pleas for siblings.

Our daughter will never experience the argy-bargy world of sibling tensions and shifting alliances. She will always have to forge external friendships to see her through. Though there will surely come a time when she will have shoulder the burden of caring for elderly parents, and one day her juggling skills may be put to the test.

But for now, soccer is all that matters. Bill Shankly would have approved. A few years ago, it was dancing, and before that drama. Who knows how long this dream of soccer greatness may endure? I don’t mind. Any time outside with the ball is time well spent. But maybe it’s time she jettisoned the Arsenal top. I’ve always preferred the red of Liverpool.