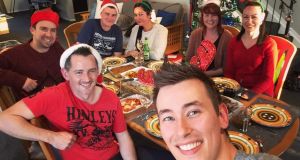 Think of Christmas in Australia, and you imagine beach barbecues, blue skies, and icy beers sweating in the sizzling sun.

But in the middle of July, as temperatures drop (to a “cool” 20 degrees today in Sydney), those with a longing to recreate the cosy yuletide feeling from where they are from in the Northern Hemisphere, or what they have seen on traditional Christmas cards, are donning their festive jumpers and Santa hats to attend increasingly popular “Christmas in July” celebrations.

The rather bizarre concept is thought to have originated with a group of Irish immigrants holidaying in the Blue Mountains near Sydney in July 1980. Spotting snowflakes falling outside the window of their hotel, they spoke of Christmases past and how celebrating at the height of summer in Australia just wasn’t the same.

The owner, who had heard all about Christmases in Ireland from his Irish father, conjured up the idea for a “Yuletide” party with turkey and ham, mulled wine, a roaring log fire and decorations. The re-created Christmas dinner for his homesick Irish guests was held a few weeks later, and again the following year, and the year after that.

“Yulefest” is now a three-month event in the Blue Mountains - where night-time temperatures are forecast to drop to freezing this week - beginning with the Winter Magic Festival around the winter solstice in June, and lasting right through to the end of August.

But the “Christmas in July” concept has spread much further, right across Australia and over to New Zealand.

It continues to be particularly popular with the Irish, especially in recent years. On Facebook this week, Irish pubs advertise Christmas jumper competitions, GAA clubs are sharing photos of their annual #xmasinjuly dinners, and friends are chatting about where to meet to make mulled wine.

“When I first heard about Christmas in July I wasn’t very keen on the idea,” says Mary Vaughan, an insurance broker from Co Tyrone who has been living in Brisbane since 2012, “but we joined friends for the sake of it. When I told my family in Ireland about it they thought it was hilarious. But we had a fantastic night.”

Dressed in Christmas jumpers and Santa hats at the Montville Mountain Inn on the Sunshine Coast, which hosts Christmas in July dinners every year, they feasted on a traditional turkey and ham dinner, followed by carol singing and a visit from Santa.

“It’s a great way for kids who don’t have the chance to experience a traditional winter Christmas to get some sense of the traditions that we were used to growing up in Ireland,” she says.

Vaughan and her husband and two children Shane (8) and Blake (2) don’t celebrate Christmas in July every year, but have just moved into a new house and plan to have friends round to mark the occasion this week.

“I’ve seen people going all out with Christmas lights and decorations on the house, but we definitely won’t take it that seriously. It’s just an excuse to catch up with friends and let the kids have some fun. And the adults too,” she says.

Businesses have cottoned on to the commercial opportunity, and many hotels, pubs and restaurants now offer “Christmas in July” menus. Some shopping centres even erect Christmas trees, and advertise special Christmas in July sales.

The government tourism agency Destination NSW has a whole section on its website dedicated to Christmas in July events and attractions, including a temporary ice skating rink overlooking Bondi Beach, a snow park for kids at Prince Alfred Square, and a pop-up restaurant at NSW Parliament House, which is offering fancy festive fare like confit turkey ballotine with a pumpkin and potato bake.

Eighty members of Clan na Gael GAA in Sydney met in a pub last Sunday for their Christmas in July dinner, which has become an annual gathering for the club, according to David Breen, a project manager originally from Co Wexford.

“In the last two or three years it has become so popular, particularly with the Irish and English expat communities. I mentioned it to some Australians and they didn’t know what I was on about,” he says.

“This is the one time of year that I genuinely get a bit homesick. It feels a lot like home because it is so cold; well, for us anyway. It’s about 14 degrees here in Sydney today. We’re in our coats. In December here the sun is splitting the stones, you are walking down the street in your flip flops and shorts, so it is easy to distance yourself from what is going on back home for Christmas. It is more relatable at this time of year. You do get a longing for the winter nights at home.”

Does it not all feel a bit fake?

“It feels as close as it will ever be to Christmas here.”

Recycling, reusing and reimagining rubbish into clothing and accessories
4