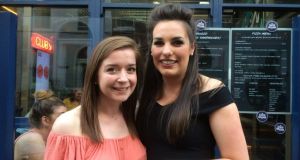 Emily McLellan and Katie Fortune are leaving to teach in Abu Dhabi with two of their classmates from St Patrick’s College. 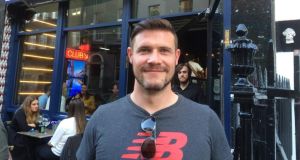 Graham Carroll: ‘Even after six years of teaching in Dublin you have basically got nothing to show for it, because the cost of living is so high.’ 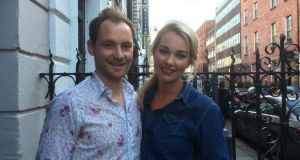 Myra Reddington and Kieran McDonagh are hoping to save enough money in the UAE to allow them to build or buy a house in Ireland.

Childhood sweethearts Myra Reddington and Kieran McDonagh have been married for four years. They make no bones about it, they are moving to Dubai to save for a mortgage.

The teachers from Swinford in Co Mayo have been renting in Naas for seven years. Reddington, a primary school teacher, says they have found it very difficult after the rent is paid to put any money aside.

“It doesn’t allow you much of an opportunity to save when you are paying nearly €1,400 in rent a month. It is a lot of money to be gone out of your wage packet initially.”

The 33- year-old describes rent as “empty money, gone in a flash”. They are hoping that taking a career break, and moving to Dubai will allow them to save a significant amount towards building or buying a house, as tax-free salaries and free accommodation are on offer to Irish teachers going to the United Arab Emirates (UAE).

The couple are among a group of other Irish teachers meeting in the South William bar in Dublin, all of them planning to emigrate to the UAE in August following successful job applications through Teach and Explore. The agency has recruited 150 Irish teachers, both primary and post-primary, to begin working in the UAE at the end of the summer.

Garrett O’Dowd and Eoin Bolger set up the company in 2014. After teaching in the UAE themselves, they found a gap in the market for an Irish recruitment agency, as most Irish teachers at the time were recruited through British agencies.

O’Dowd says teaching in the UAE is very popular option for Irish teachers, because they have not yet seen the effects of the economic recovery.

“We are getting a lot of people in their early 30s, couples going over looking to save and come back and buy a house for themselves. You are getting an awful lot of newly-qualified teachers or people with two or three years of experience that don’t have a permanent job in Ireland.”

The recruitment agency organises for schools from the UAE to come to Ireland and interview teachers, or for an interview via Skype. Most of the teachers recruited will be on one- or two-year contracts in either Dubai or Abu Dhabi. Like many before them they have been drawn to teaching in the UAE by the tax-free salaries, free accommodation, bills paid for and medical care provided.

There is palpable excitement in the bar. New acquaintances are formed and people who are about to spend two years abroad together clink drinks and tentatively get to know each other.

Among them is Graham Carroll. He is on a career break and going to teach in Dubai. From Drogheda, he teaches French in a girls’ school in Finglas. He is leaving for a number of reasons, citing a love of travel and the desire to experience new cultures.

The 32-year-old jokes that he may build a house when he comes home - well that his mum wants him to do anyway.

He also says high rent has hindered his capacity to save. “Even after six years of teaching in Dublin you have basically got nothing to show for it, because the cost of living is so high.”

As French is quite a select subject, Carroll was apprehensive about the possibilities of getting a job in the UAE. But he secured an interview in London for a position as a French teacher in Dubai. Three days before he was due to fly to London for the interview he saw on Teach and Explore’s Facebook that interviews for a similar position were being held in Dublin.

When he inquired he found out it was actually the same position that he was to be interviewed for in London. Carroll was told that he could be slotted in that day, he decided on a whim that he would attend.

“I was wearing my gym gear and I had gotten a fresh haircut, I looked like a bit of a bowsie. I went into the interview, everyone else was in suits. I popped into the director and I said, I do apologise because of my attire, and he said I don’t care as long as you can teach.”

After further interviews he got the job and will be moving to Dubai in August. He is looking forward to the challenge and the chance to experience a new culture.

Newly--qualified primary school teacher Katie Fortune says she doesn’t know whether “to be excited or nervous” about going to teach in Abu Dhabi.

“It is very far way obviously and it is not like hopping into a car and going home to see mam and dad, but it will be nice, it will be an experience.”

Fortune (23), from Wexford, is the “baby” in her family. She says Skype will be a big help in alleviating homesickness and that “the family chat” on WhatsApp will be fully utilised.

Emily McLellan, like Fortune, is a newly-qualified teacher from St Patrick’s College. She is going with McLellan, Fortune and two other friends from their class.

McLellan, from Clonsilla in Dublin, says she didn’t try to get a job in Ireland.

“It all happened very quickly. We looked into it (teaching in the UAE) to see how easy it would be to get out there. We realised, for us anyway, that it was very simple. We are going to be on a higher wage over there than we would be here. I think it will be a great experience just to teach in a different country.”

For others, teaching in the UAE was a little longer in the pipeline; two years for Reddington and McDonagh.

As McDonagh is a woodwork and technical graphics teacher, he would be eligible to teach only design and technology in the UAE, which would offer few job opportunities. He went back to university and completed a two-year degree in maths, which he will now teach in Dubai.

Reddington has some safety concerns and says she will be a little nervous initially. “I know there is very little crime. . . but it is going to take me a little time to feel comfortable to travel alone.”

Riptide by Vance Joy drifts though the air as a band begins to play. You can no longer hear the chatting and laughing, but you can see the teachers mingling, trying to establish what collectively lays ahead for them. Over the music the motto of the night hangs in the air; “What have we got to lose?”