Why am I teaching Irish to American university students? 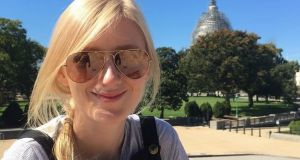 The assumption when I tell people I am pursuing a Fulbright scholarship in Washington DC is that I have taken a turn away from education and moved vaguely in the direction of politics. Given the year that’s in it, while I have developed a significant interest in American politics since moving here, nothing could be further from the truth. I am often met with surprise when I explain my job actually involves teaching Irish to university students.

I am one of approximately 400 Fulbright Foreign Language Teaching Assistant (FLTA) scholars from around the world currently teaching my native language and studying here in the US, an amazing opportunity to have been afforded and, despite the looming finish line, an experience that still feels surreal. However, as interesting as it has been on this side of the Atlantic, I find it is often more interesting explaining to fellow Irish people what I do, and am often asked “why?” when it comes up in conversation.

So, why am I teaching Irish to American university students?

Because there is such high demand for Irish language courses here that they are being taught in almost 100 colleges and universities across the country.

But why would anyone here bother to learn Irish?

This might sound like a simplistic or vaguely sarcastic question, but over here, I’ve learnt that Irish is just another language. Like French, German, Spanish or Chinese, it is viewed simply as a means of communication and gateway to another culture. It isn’t weighed down by the same emotional baggage as it is at home, which is something I still find both confusing and refreshing even seven months into the programme.

It’s confusing, when explaining seemingly complex grammatical structures, to see heads nod rather than eyes roll. It’s refreshing to realise I don’t need to wince, as though preparing to rip a plaster off my body, whenever the tuiseal ginideach rears its head.

It took a while before I could embrace this feeling, however, and for the first few weeks, my instinct, whenever I thought the language might be too confusing for my students, was to apologise. I learnt that, despite my love for Irish, I was terribly apologetic about it, and the more I considered this, the more I began to realise I wasn’t the only one.

When asked recently by American television host, Stephen Colbert, about the pronunciation of her name, Saoirse Ronan’s response was “It’s a ridiculous name. It makes no sense. They’re all ridiculous”. Oh, how the teacher in me lamented the loss of such a beautiful, teachable moment. “Explain that aoi in Irish sounds like ee” I wanted to tell her through the laptop screen, “and that it, like most other sounds in Irish, is actually very consistent and evident in many other popular Irish names, like Aoife, Caoimhe or Aoibhinn”.

What frustrated me about the interview however wasn’t Saoirse’s response, but that it reminded me of many awkward experiences I’ve had with my own name, and the irrational feelings of shame and guilt that have stirred within me when spelling it out to baristas in coffee shops or waiting for it to be called from a list. There are several obvious reasons this I-am-so-sorry-to-have-burdened-you-with-my-stupid-name-please-let’s-just-laugh-it-off-and-pretend-I’m-a-normal-person-and-move-on” response overtakes Irish people in such situations, but that conversation can be tiresome, and often plays like a broken record. What I’m interested in is how we can learn to dismantle our apologetic tendencies, and I was surprised to realise that a love for the language might not necessarily solve the problem.

Having grown up speaking Irish at home, completed a degree in it and spent a year living in the Gaeltacht, it’s no surprise I have what can be argued as “starry-eyed ideals”’ about the language; I wholeheartedly feel it is a national treasure that should be prioritised, promoted and preserved at all costs. I unabashedly swell with pride whenever Michael D Higgins concludes a speech with a carefully selected seanfhocal, and think it essential that all representatives of the country take the same amount of pride in and have a similarly high standard of spoken Irish.

As a nation, we need to stop the self-handicapping practice of blaming the education system for our lack of fluency, and take it upon ourselves to learn the language if really want to. I believe we would genuinely be a happier, more secure and self-confident people, socially, politically and economically, if only we did.

But these are personal feelings that stem from a childhood of nursery rhymes and bedtime stories as Gaeilge, and it is not my intention to tell a nation of people - the majority of whom will have had a vastly different experience of learning Irish to me - to suddenly feel the same way I do. But our instinctive tendency to apologise for and dismiss the Irish language and its perceived peculiarities - whether in the context of our names, place names or road signs - is something many of us have in common, often regardless of our real feelings towards the language.

Perhaps when it comes to Irish, my American students have it right; it is just another language, comprised of its own grammatical structures, and with its own culture surrounding it. Though it is unique to this country, perhaps treating it like just another language is the highest mark of respect we can bestow upon it. Perhaps it isn’t necessarily about loving it. In fact, perhaps we need to be a little less emotional from every angle. Perhaps we just need to learn to respect that it is a language in its own right, and learn to take pride in it that way. Perhaps by doing so, we learn to accept that actually, that’s what makes it, and everything we’re so quick to dismiss as ridiculous, completely normal.