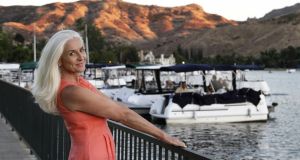 Model and actor Olivia Tracey: ‘Los Angeles can be brutal to get ahead so you reap what you sow.’ Photograph: Erin Manning

Model, actor and writer Olivia Tracey was enjoying a successful career in Ireland, but the dream of living in Los Angeles was an itch she had to scratch. Now, 22 years after arriving in the City of Angels, she is still happy to call it home, but its palm tree lined streets haven’t always been paved in gold.

Originally from Terenure, Tracey attended Loreto Beaufort in Rathfarnham. After her Leaving Cert, she studied English and French at UCD with the view of becoming a teacher.

A part-time job at a fashion boutique was to turn her life around when an opportunity to model presented itself.

“It was terrifying but exhilarating at the same time. I loved the glamour and the buzz of a live show.” The phone soon started to ring. “By modern standards I was pretty old getting started– early 20s – but I embraced it with open arms. It was such a great time to be in fashion.”

Her modelling ascent was steady. In 1984, Tracey won the coveted Miss Ireland crown.

“It was such a great occasion and role. I relished every minute of it,” she says. It launched many opportunities, like working in RTÉ as a continuity announcer and a TV host, touring the US coast to coast and segueing into acting.

“I completed a course at the Gaiety School of Acting, and landed a role of Cinderella in the Gaiety Christmas panto. A more serious role in the Andrews Lane Theatre production of Lady Chatterley’s Lover, saw her tour the country.

“I probably could have stayed in Ireland and continued on this path, but I developed a yearning to go to the States,” she says. “I was scared, but I knew I’d regret it if I didn’t go. And the one thing modelling taught me was to push past my fears.”

Tracey initially went to London for a year before moving to New York in 1994. “Before I left Ireland, I arranged to write a New York diary for the Sunday Independent and once I was set up, I got a column with the Irish Echo. I also was lucky enough to live with friends of my sisters who owned an Irish pub. It was an incredible time in New York, and I really landed on my feet.”

Within a year, Tracey picked up theatre work, an agent and a Green Card, which led to an Equity Card and more work. But Los Angeles was still calling so, with just a handful of contacts, she headed west early in 1998. “It was risky as New York was going so well, but a dream is a dream.”

But things didn’t go as seamlessly. “The first two years were really tough. It took me a long time to settle in. Los Angeles is vast and lonely. I was really used to New Yorkers, who say it how it is. Here people give you their number, then avoid your call.”

At first she lived in Brentwood, just a few houses down from the famous condo on Bundy Street where Nicole Simpson lived. “Then I got a place in Santa Monica, which had the use of a pool, so things started looking up.” Then Tracey got a job at a local TV channel, but the producer disappeared and she was never paid.

“In LA, no one wants to meet you. They don’t care who you were before you landed, what you did or how successful you were. When you arrive in Los Angeles, you start from the beginning and it’s a tough journey.”

The 2000s in Los Angeles saw Tracey get a job doing narrations with car manufacturer Kia. “I still have that job. It’s great. I get to work all across the US.”

“It’s funny when I was 25, I wasn’t hired, but when I was 45 I had moved into a different demographic and was more sought after.”

Tracey had acting roles in Gilmore Girls, The Island and a leading role in the 2003 film Red Roses and Petrol. She also appeared in TV shows and played opposite Robert Duvall and Drew Barrymore.

“I was also lucky to always travel to Ireland every summer to work and see my family and friends.”

Since March this year, the phone has been a little slower to ring, but Tracey says she is still working. “Recently I’ve done a few Covid-19 friendly shoots and some auto conventions. It’s great. In the middle of a pandemic, you need to be flexible and have a little reserve fund.”

She also took a writing workshop online and is working on her first novel.

“It’s a really great time to do it, and Los Angeles in the winter time is wonderful and sunny and warm. I can write from my home near Studio City. I bought it in 2004 and it sits amidst trees and a pool, so it’s very LA. If you’re going to live the American dream, you need a pool. Having all this nature on my doorstep is a blessing.”

Tracey says she misses meeting up with the Irish community in Los Angeles. “In a normal year, there are so many amazing events. The Irish in Los Angeles are extremely inspiring. There’s so much Irish talent here, it’s something we can be proud of.

“When you go to an Irish event, you know everyone will stick around for a drink and some banter afterwards. It’s just a given, but it’s not always like that over here.”

The trick to surviving a pandemic in Hollywood is not to look too far ahead, and be happy with what you have.

“I had a big birthday this year, so I was planning on living la dolce vita in southern Italy for a few weeks, but alas it will have to wait. As a model, actress and writer, I’m blessed to still be working. Los Angeles can be brutal to get ahead so you reap what you sow.”

Like most expats, Christmas away from home will be different this year. “Obviously I’d love to go home, but I don’t think it’s going to happen. Thankfully there will be a few of us around so we’ll make the most of it. America has gone through a lot recently, but I’m positive for the future here.”