Ireland has work to do to include citizens living abroad 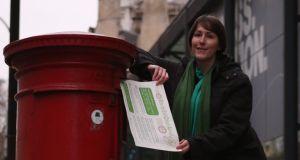 Sarah Cantwell has been living in London for three years.

Today is International Migrants’ Day and people around the world have been sharing #Iamamigrant stories celebrating the contribution of migrants to open and inclusive societies.

For me, this inspiring campaign highlights how there is still work to do in creating an Ireland more open to and inclusive of the views of its citizens who currently live abroad. This is why I became involved in the Votes for Irish Citizens Abroad campaign group after I moved to London three years ago.

As a child of the Celtic Tiger, I assumed I would never have to migrate except by choice, and that large scale economic emigration from Ireland was firmly in the past. But my perspective was dramatically altered around the time of the Irish bailout in late 2010. Alongside pictures of the Troika walking along towards Government buildings to “take over”, I remember talking to with my family and hearing how frustrated they were that this was the 1980s happening all over again, with mass emigration being used by the government as an economic safety valve and Ireland losing a big chunk of another generation of people - again.

As Seanad candidate Barry Johnston recently put it in a column for Generation Emigration, there has been a net loss of 1,000 votes every fortnight since last general election due to emigration. Even if some of these people can eventually manoeuvre a return to Ireland, that is still a massive amount of potential voter feedback on its policies that it has been highly convenient for the government to quietly exclude and ignore.

And then, three years ago, I found myself in London, experiencing for myself the opportunities, challenges and dilemmas faced by emigrants. For instance, I’m travelling back to Ireland tomorrow for Christmas and I’ll get to see my sister (also an emigrant) for the first time in a year. We have a week to get used to being in each other’s company again and then we’re gone away back again to our busy lives in different countries.

My mother retired just before I moved over. Since then she’s got involved in new activities and expanded her social network, but I know she would rather if we were home and she could spend more time with us.

Platforms like Generation Emigration have helped me to see more and more clearly that these difficulties and dilemmas are being experienced not just by me and my family, but by many Irish emigrants and their loved ones. Mass emigration is a societal issue, and the Irish State needs to take responsibility. It is simply not good enough to be quietly relieved to see people leave in times of crisis, and assume we’ll return whenever the economy needs us again.

One concrete action that could and should be taken now to redress this situation is to include the voices and votes of its citizens abroad in its democratic processes, as 129 countries worldwide have already done. The Irish State has prevaricated on this responsibility for decades, but the pressure is currently building to push the government to do this.

I love being a member of Votes for Irish Citizens Abroad, because it allows me to contribute to positive action on this issue. Today, for International Migrants’ Day, we’re launching our Right to Vote postcard. This provides relevant information and questions that family and friends can use when they meet a politician canvassing for the general election in 2016. Since Irish politicians have no mandate to listen to the voices of Irish citizens abroad, we figure we need to get our families and friends in Ireland to speak to the politicians on our behalf and push for our right to vote.

You can help out with this campaign by sharing the Right to Vote postcard on social media, by personally sending it to your family and friends, and by mentioning it on the phone or telling people about it if you’re able to get home for the season’s festivities. Our families and friends in Ireland already consult and include us when they’re making decisions about the future. Now we need to make sure they let politicians know that they want us to have a say in elections and referenda in Ireland.