How much beer will a dollar buy you in Dublin, London, Sydney? 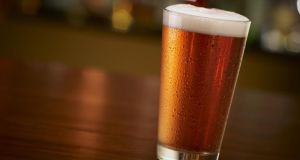 Dublin might have some of the best pubs in the world, but you’ll get a much cheaper pint elsewhere. Photograph: Thinkstock

If you like cheap beer, avoid New York and hit Prague instead. If you resent paying through the nose for public transport, don’t go to London. And avoid Dublin too.

We complain a lot in Ireland about the cost of things, but according to Expatistan’s Summer 2015 cost comparison report, we’re not faring too badly compared with other major cities. Dublin is ranked as the 28th most expensive city worldwide (down from 26th last year), and number 10 in Europe.

The international survey is based on contributions from people around the world, and measures costs such as: how far you can travel for $1 worth of petrol, or how much beer you can drink for the equivalent of $1.

Zurich emerged as the world’s priciest city, 49 per cent more expensive than Dublin, followed by Geneva and Grand Cayman in the Cayman Islands.

Expatistan.com collects prices for everyday items and living costs from people living in every city in the world. Since 2009, more than 1.2 million prices have been submitted from 340,000 contributors based in almost 2,000 cities in 200 countries.

That’s a heck of a lot of data, but the website simplifies things by ranking the overall cost of living in each city based on the prices provided by users. It also allows users to compare costs in particular cities. To keep the data current, the most recent prices are given greater weight.

So how do prices in Dublin compare to some of the most popular cities for Irish emigrants worldwide?

The cost of living in Perth and Brisbane is about the same as Sydney, according to the site, but Melbourne is about 5 per cent cheaper.

Toronto, the most popular city for Irish emigrants, is about 7 per cent cheaper to live in than Dublin. Food and rent will cost you about the same as home, but your monthly bills for gas and electricity will be about half the price, despite the colder weather. Transport is also much cheaper; a new Volkswagen Golf is 26 per cent cheaper than in Dublin, while a litre of petrol costs 43 per cent less at just €0.82 (CA$1.15), and a monthly public transport ticket 20 per cent less. The pubs might not be as good as home, but the drink is cheaper; a pint of beer costs about 11 per cent less, and cocktails 20 per cent less than in Dublin.