This is the winner of the Generation Emigration Why I Love Living In . . . competition 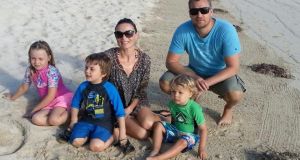 Anne Tiernan and family: It probably goes without saying that we enjoy a sunnier climate in New Zealand. The downside is cockroaches, mosquitoes and man-eating sharks

New Zealand is well known for its long, golden, pohutukawa-lined beaches, dramatic snow-covered peaks rising from pristine turquoise lakes, glaciers, fjords, and the southern night sky unpolluted by artificial light and crammed with stars. But it takes more than aesthetics for a place to really get under your skin.

On my first visit here I was deeply affected by the warm, hospitable, endearingly informal Kiwis. You soon start to almost enjoy being greeted loudly and enthusiastically by shop assistants as you try to skulk, Irish-like and inhibited, through the entrance.

This informality extends all the way up to the prime minister, John Key, who had a penchant for pulling the ponytail of the waitress in his local cafe when he popped in for a flat white. (He had to apologise to her recently when this turned out to be unwelcome behaviour.)

The relaxed attitude is also evident in the ageing national car fleet and in the national dress code. Flip-flops are acceptable footwear for just about any occasion. Indeed, going barefoot is also considered acceptable (unless you are a neurotic Irish mammy mortified by the sight of your shoeless children waiting at the school gates).

I have grown to appreciate the ingenious approach to language here. My favourite is the Yeah Nah response. This handy linguistic technique gives one the appearance of being empathetic and open towards others’ ideas while simultaneously rejecting them. So you might opine that this may, finally, be the year that Ireland beat the All Blacks. “Yeah,” your Kiwi friend says slowly, pausing to look into the distance as though taking your opinion seriously. “Nah,” he then says, almost regretfully. Thus your friend has dismissed your opinion, but gently. Genius.

Another handy trick is the lazy simile. Take any adjective, follow it with “as”, and just leave it there, hanging. New immigrants, especially from the English-speaking world, may at first find it confusing. Sweet as what, you wonder. But soon you too begin to use this trick, where you can describe anything without having to think very hard. New Zealand English is full of practical short cuts, making it an opposite of Irish English, with its poetic verbosity.

It probably goes without saying that we enjoy a sunnier climate in New Zealand. (In fairness, there are few places you could emigrate to from Ireland where the climate would be worse.) The downside is slightly more annoying wildlife – cockroaches, mosquitoes, man-eating sharks – and significantly greater geological activity.

The weather is important because you will be expected to participate in and, crucially, enjoy all manner of outdoor pursuits. Sailing, fishing, hunting, skiing, surfing and tramping are all worthy ways to spend your free time. Fear not, though: if all this sounds too virtuous, the climate is also conducive to producing excellent wine. You can quaff this while bemoaning New Zealand’s binge-drinking culture and the fact that it is now the fourth-fattest country in the OECD.

Another advantage is New Zealand’s proximity to Australia. If you have always fancied living down under but find mutant wildlife, bush fires and Tony Abbott too terrifying, then New Zealand may be the country for you. Some decent shopping and winter sun are only a short flight away.

Picturesque, down to shaky earth, friendly New Zealand. If only it were a little closer to Ireland.