A 'millennial' moves back to Ireland and asks, is this it?

Settle down. Work hard. Save up. Get a car. Buy a house. Why? Because it’s normal? 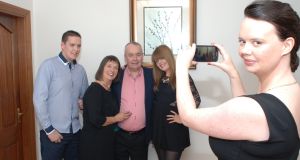 Holiday snap: Katie Harrington with her family at Christmas

Born in 1988, I’m a bona fide member of that most overanalysed and undervalued generation: the millennials.

I am a member of the first generation in modern history that is likely to be poorer and less healthy and to die younger than its parents’ generation.

Our future was mortgaged by generations that went before. We cope with that fact as best we can, but we are so consistently stereotyped as infantilised brats that “millennial” may as well be a synonym for “entitled”.

We are seen as fickle because we job hop, when the truth is that the traditional model of earning promotions and pay rises in return for loyalty and hard work no longer exists. We move from job to job because our contracts are running out, because we can’t afford the rent on what we make, and because our employers remind us constantly that we are replaceable (apparently failing to grasp the point that they are as well).

We don’t see employment through a pre-Industrial Revolution master-slave lens; rather, to us it is a reciprocal arrangement. I need money to buy things, and companies will pay me a certain amount of money in exchange for my time and skills. It is not a parent-child relationship.

A portion of that money is taken as taxes by the Government. That is fine with me – although I would prefer it were spent more wisely, because I need to live in a country that has public transport and education and a functioning health service.

Eight months ago I moved home from the Middle East after six years abroad as an expat. I quickly found a good job and settled back into life in Ireland. It was a 12-month maternity contract, mind you, meaning no chance of a mortgage, no security and an uncertain future.

Despite its precarious nature it’s the kind of work that my father, who is a taxi driver, thinks I would be mad to walk away from, with health insurance and a pension on offer.

Each morning I wait at the bus stop by O’Connell Bridge in Dublin and ask myself: “Is this it?”

I’m a millennial cliche, unsatisfied with the path my parents’ generation would have me follow. Settle down. Work hard. Save up. Get a car. Buy a house. Why? Because it’s normal? Because that’s “what adults do”? Who decides this stuff anyway?

If this is being an adult I want my old job back.

I’m 28. With the retirement age soon set to go up to 68, and perhaps further, I refuse to accept that this is it for the next 40 years. A dreary commute to a 9-5.30 job, 21 days of annual leave, and a portion of my salary saved each month, building at a glacial rate towards a mortgage I’m not sure I even want.

By my bus stop a sign offers me an out. For a very reasonable €1,800, an around-the-world ticket and the promise of an adventure. From Buenos Aires to Santiago, and then Auckland and Sydney, with a stop-off in my old stomping ground of Dubai on the way home. The chance to write and maybe even make a living out of it. It’s the gig economy, baby, and anyone can be an entrepreneur. To learn to speak Spanish and salsa dance and scuba dive.

“I thought you got all that travelling out of your system,” my dad will say. “It’s time to cop on.”

Great British Bake Off: How they got around social distancing in the tent
5