Flying home for Christmas: ‘It’s so good to come back . . . there’s no one else like the Irish’

There was tearful reunions in Dublin airport as weary travellers were reunited with their families for the Christmas period. 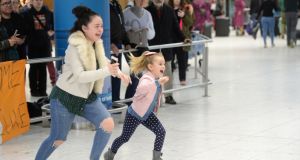 Nicola and Jamie Crosbie’s hands are tightly clasped as they stare intently at the automatic doors in the arrivals area in Dublin Airport’s Terminal 1. Beside them, Niall Cummins paces back and forth behind the large “Welcome home” tricolour tied up to the metal barrier, while six-year-old Katie skips around the hall, peering inside the opening-and-closing doors in the hopes of catching a glimpse of their visitors.

The Crosbie family are waiting for 22-year-old Ciara Crosbie and her boyfriend Luke Clarke, who moved to Australia in mid-2016.

“She’s been in Australia for 15 months and I haven’t seen her in all that time,” says her mother Nicola, as she glances anxiously towards the stream of people flowing into the arrivals hall.

“We were out of bed at 4.45am to come here, but I didn’t really sleep at all last night. I just feel like this wait is never going to end, these minutes are dragging by so slowly.”

Ciara, who works as the manager at a call centre in Sydney, decided to surprise friends and family when she booked her tickets home for Christmas.

“Nobody knows she’s coming back,” says Nicola. “We’re meeting my dad for breakfast and then we’ll surprise my mam by just walking into the house. She wanted to make it a surprise and I thought it was cute. But I do think my dad’s going to have a heart attack.”

All of a sudden, Jamie Crosbie, Ciara’s younger sister, lets out a shriek of joy and runs towards the young couple emerging through the automatic doors. With tears streaming down her face, Jamie pulls her sister into a tight hug and is quickly joined in the embrace by Nicola, Niall and Katie.

Shortly after the Crosbies’ reunion, the Nyathi family arrive from South Africa. Jacob Maimela has come to the airport to welcome his sister Vivien, who he hasn’t seen in six years. He is also meeting his two nephews, Bonga and Khumo, for the first time.

“I’ve missed him so much,” says Vivien, who is visiting from Johannesburg. “I’m here for a month, so that gives me plenty of time to push my baby brother around. There will be a big party over Christmas, we can’t wait.” 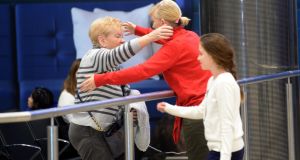 In Terminal 2, Adrienne Meagher is waiting expectantly for the arrival of her two daughters and two-year-old grandson from Virginia in the United States. Dressed in reindeer antlers and a festive Rudolph T-shirt, Adrienne is overjoyed to finally have her daughters home for Christmas.

“It’s the first time they’ve been home for Christmas since 2011. They were actually born out there and we brought them home to Ireland when they were very young. They went back as adults – it was difficult during the recession, they had to go.”

The last time Adrienne saw her daughters and baby Aidan was in October 2016. “I’m beyond excited, this is Christmas morning for me. Santa is getting ready to arrive!”

Judy Johns, her husband Chuck and daughter Sophia have had a long, drawn-out journey home from the US. The family, who live in Myrtle Beach in South Carolina, were delayed by 24 hours after their flight was cancelled.

“We were supposed to arrive this time yesterday, but there was something wrong with the wing of the plane. Then we arrived this morning to no bags, but we’ve finally got them back now.”

Judy has lived in the US since the early 1990s and it is her first time home for Christmas in five years. “It’s so good to come back. The minute we got on the plane with Aer Lingus, I said to my husband, ‘there’s nothing like it.’ There’s no one else like the Irish, and that sense of humour. I miss that more than anything.”

Geraldine Morris and her husband Jim are waiting for their 19-year-old son Brendan, who is travelling from Minneapolis via Newark. After spending a year working with the Net (National Evangelisation Team) ministries in Ireland, Brendan was chosen to spend a year with the group in the US.

“He’s on what they call a road team, so his training is in Minneapolis, but he’s actually travelling around America,” explains Geraldine, who has been awake since 2am watching the online flight tracker in anticipation of her son’s arrival.

Lindsey Scott, Brendan’s girlfriend, has also come to meet him at the airport. “I’m from Indiana in America, but I’m in Scotland right now doing the Net missionaries. We met last year and were on the same team. I’m actually going back home in two days, so we just want to be together for a bit.”

Nearby, Kathleen O’Carroll is meeting her great-granddaughter Charlotte for the first time. Róisín O’Carroll, Kathleen’s granddaughter, and her fiancé Taylor, had planned to surprise the family, but the news slipped out the night before their arrival.

“I only found out last night, my other granddaughter told me she was coming in the morning,” says Kathleen. “I have another son arriving from Australia in a few days. I have two sons in Australia and one in the US, they’ve all been gone 30 years.”

As the early morning crowd begins to swell, a colourful sign with the words “Welcome ho ho home dad” printed in large letters emerges near the barrier. Amy (13), Adam (10) and Jack (8) Harmon have arrived in Dublin airport to greet their dad, Steve, who is working in Saudi Arabia.

“He’s been in Saudi two and a half years and comes home about three times a year,” says their mum, Paula Harmon. “It’s really exciting. The kids were awake and dressed early, ready to leave – they never do that for a school day.”

The children last saw their dad during the Halloween break. Paula hopes her husband will be able to move back in two years, and says his absence is difficult for the kids.

“It’s a big deal for us to have him home with us because we don’t normally have him around. This is huge for them.”

Coronavirus: ‘Like my anxiety, my survivalist mentality come and goes’
5