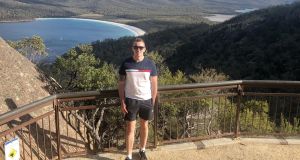 Niall Bishop, who is originally from Monaghan, but now lives in Melbourne

Niall Bishop is from Monaghan, but now lives in Melbourne, where he works for the private health insurance and healthcare company Medibank. The city was put back in lockdown on Wednesday for six weeks after the Victoria state government received medical advice that the rate of coronavirus spread there was unsustainable.

How is the new lockdown affecting you in Melbourne?

I have been working from home for 17 weeks, which has had its ups, but has also been mentally draining. We were finally seeing some light at the end of the tunnel with restrictions starting to lift, but the news of a new lockdown in Melbourne has just completely shattered the spirits of anyone I’ve spoken to. It is great that I’m working, as there are no financial supports over here for anyone bar citizens.

The biggest concern at the minute is staying in work; my partner has just finished a contract, and highly unlikely to get another one in the next two months. We’re fine, but the mental health aspects of being locked in your home without work I not something I’m looking forward to witnessing.

It has really just killed any sense of enthusiasm I had about the next few months, it also means the chances of getting home to Ireland to see everyone just gets pushed out further

How does it feel returning to lockdown?

It has really just killed any sense of enthusiasm I had about the next few months, it also means the chances of getting home to Ireland to see everyone just gets pushed out further.

Will it make a difference to the people of Melbourne?

I think most people feel the same way as I do - frustrated. But we do know it is for the best. Small businesses will really struggle, there will be more that will close their doors permanently and it will cause higher levels of unemployment.

How do you feel about being in Australia now?

It has been almost three years since I made the move here. The devastating fires earlier this year and now the Covid-19 pandemic have really changed the mood in the city. I’ve spent a good chunk of my 20s moving around, between Texas, Ireland, travelling in Asia and then Australia, but I always had the grounding notion that at any moment I could pick up and leave. That has essentially been stolen in light the recent events.

The latter half of 2019 and 2020 so far hasn’t exactly been a great year for anyone in Australia. In Melbourne, people are still getting on as best they can, but for those areas badly affected by the fires and then a pandemic, the outlook isn’t as good. On the upside, a large portion of Australia seems to be getting past the Covid-19 crisis quite well - just not the area I’m living in.

Has the current situation changed Australia?

From where I sit currently, overlooking Albert Park near St Kilda, everything looks the same. The palm trees lining the main road still glisten in the winter sun, the cityscape still towers over the lake and the swans and ducks go about their business as usual, but dig a little deeper and changes are very evident here. There are no longer any boats or rowers on the lake, there’s less social interaction on the walking tracks and the city, although it has the same the number of active cranes, seems to be on the way down.

Coronavirus has changed the way we live, and it has also changed the Australian outlook on immigration. I think it is only natural for people to want to protect their own, and with all that is happening, Australia has made protecting their own the top priority. Despite paying taxes here, Australia won’t allow anyone other than citizens to access social welfare, so there are many people stuck here with no job and no financial support.

How is work for you at the moment?

From a financial perspective I’ve been quite fortunate. Medibank, who I work for, is quite a progressive company, and working from home hasn’t been a problem. Also, as part of our offering is healthcare, the volume of work during the virus has spiked.

For my partner, a teacher, it is tough to find anything permanent at the best of times, but with Covid-19 and the economic uncertainties that come with it, schools will most likely make do with what they have, so job opportunities will be limited in the coming months. Like all Irish abroad, she is very resilient and will get by; the plus side of living in a large city is that there are jobs out there. They may not be in her field, but skills are transferable and there’s a lot of value teachers can bring to a corporate setting.

What was life in Melbourne like before the second lockdown?

Life here, although a shadow of what it was nine months ago, was still good. The restaurants and cafés had been opening their doors again. Plus, during the last few months we have probably hiked every inch of the surrounding countryside. It was definitely a little strange booking in to have a coffee, and there was no such thing as a spontaneous pint with a group of friends either. Shops and stores had occupancy limits, very similar to what I’m seeing at home, maybe a little more lax.

Or so it was until a few days ago, when we hit a second wave. Around one-third of the city has essentially been closed off, with heavy police presence at the boundaries. It was pretty similar to Irish border checkpoints my parents had to deal with in the 1980s, but without the guns, and the police are a little more tanned.

Since Wednesday, people will only be able to leave home for essential reasons, such as for work, exercise and shopping for food and other necessities. Schools will largely return to distance learning and restaurants will, once again, only be permitted to serve takeaway food. However, shops and hairdressers will remain open.

How does your future look?

I am not sure how the next few months will go. I had planned on going home for the end of June, but that’s cancelled indefinitely. I am not sure how this second lockdown will work out. For me it has now been 17 weeks working from home, which to be honest is OK and I am still getting paid. The major effect is probably more mental than anything. The mood is one of survival, people are still friendly, but if you stop and talk to someone in the street, onlookers will gaze in a disapproving manner. Sneeze on a tram or train and you’ll see people moving as far as possible. As it is now winter here, sneezing is quite common.

Although it has been a tough year, I’ve still got love for Melbourne and want to see how things fare here once we get past Covid-19 before making any decisions on where to be for the next few years. Hopefully we don’t get more bushfires this summer, and if we do break past this virus, things should start to look up. Australia is a pretty robust economy too, and hopefully the prospects start to brighten very quickly for all those affected by job losses and cutbacks.

For me, I’m just hoping airtravel goes back to normal soon. It has been almost two years since I was last on Irish soil and I'm starting to miss it.

If you would like to share your experience of how Covid-19 is affecting you there, email Irish Times Abroad at abroad@irishtimes.com