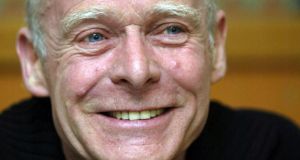 Eamonn McCann: “It is the only agreement in the history of conflicts which does not define the conflict which it is designed to resolve.” Photograph: Paul Faith/PA

“The reason I spoke against the agreement at the time was not about not wanting peace. It was the fundamental flaw in the agreement that it was not to bring people together but to police them apart, to replace hostility between the people by a grudging willingness to rope along together separately . . . The contradiction at the heart of the agreement is the fact that it institutionalises and formalises the sectarian division which gave rise to the violence in the first place. I am still convinced about that.

“It is the only agreement in the history of conflicts which does not define the conflict which it is designed to resolve . . . nowhere does it say what the conflict was about – it is a prescription without a diagnosis, which is a dangerous way to go about things . . . I think the reason why we have got peace is nothing to do with the Belfast Agreement negotiations. The key players in bringing about peace were the two sections of the working class in the North. In Catholic working-class areas support for republican paramilitarism by the 1990s had reached a settled position of being unwilling to support a war for a united Ireland if this meant conflict with their Protestant neighbours. At the same time the vast majority of Protestant working-class people had made it plain that they were unwilling to support a loyalist paramilitary campaign if it was to prevent Catholics getting a share of power.”

1 ‘I wandered around Dublin wondering: Is this what they call a capital city?’
2 Funeral of John Hume hears peacemaker ‘gave dignity and life to so many people’
3 Bank of Ireland to cut over 1,400 jobs as Covid-19 drives €937m loans charge
4 Fresh investigation into the murder of Michaela McAreavey in Mauritius
5 NPHET calls for ban on non-essential travel from countries with high Covid-19 rates
6 10 suspected stolen dogs recovered by gardaí in Co Limerick
7 In Oz, Marianne would have told Connell: ‘Get stuffed, you gutless wonder’
8 Trumpism may be dying but is still dangerous
9 Scally says alcohol is ‘best friend’ of Covid-19 and pubs must stay shut
10 ‘There were times I had to step outside to hide my tears, take deep breaths and then carry on’
Real news has value SUBSCRIBE