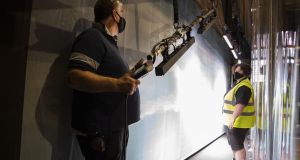 Kilkenny, alone among the bigger summer arts festivals because of its timing, has been tentatively reshaping its festival into what they’re calling Kilkenny Arts Festival X. A mixture of virtual and live events from August 7th to 16th, they are taking the first steps to bring audiences and artists back into the same room.

Audiences will experience live performances in person, including the world premiere of a major new theatre production Solar Bones, performed by Stanley Townsend and and directed by Lynne Parker, at the Watergate Theatre; Eight Seasons, two live concerts from the Irish Chamber Orchestra directed by Katherine Hunka in St Canice’s Cathedral; bespoke 20-minute performances by members of ICO and Crash Ensemble for individuals or family units to experience on their own; and a new installation performance, Clouds and Boulders: Mapping Terrain, from choreographer and dancer Luke Murphy.

Visual art and exhibitions feature strongly. The new Butler Gallery location at Evans’ Home opens from August 6th. It includes a landmark new exhibition, The Bloods, by photographer Amelia Stein – a portrait and visual inventory of members of the Defence Forces based in James Stephens Barracks, Kilkenny. Also at the new Butler is an installation presentation of Sam Perkins’ hypnotic music and movement in the film Grey Area by Niall O’Byrne and Sam Curtin, capturing the rhythms and colours of skateboarding to a soundtrack recorded by Crash Ensemble.

New work made while cocooning by artist Helen Comerford, Covid-19 April Diary, is at the Gallery Space at the Watergate Theatre, and there’s an outdoor sculpture trail, Connected, beginning at the Castle Yard leading visitors through the city’s key cultural and historic sites, with self-directed workshops and activities for all ages.

Festival director Olga Barry says everyone is figuring all “all this out” at the same time.

“The coming together of the cultural infrastructure in Kilkenny to work together is really something. We’re partnering them in their work, and they’re partnering us with open arms for what we can bring and ’festivalise’ through X. It’s been a joy,” she says.

“I don’t want to minimise the challenges, it’s been an absolute horror of a year, total despair and worry; real chest tightening stuff.”

But now, as it’s about to start, she says, “the protocol planning, the bombproofing, all feels worth it when a great musician fires up in front of you, for the first time in nearly five months. The energy is intoxicating again. Artists telling us they feel reassured by what we put in place around them to make it work.

Barry says she is a producer at heart. “I got the same buzz when the production and technical crew started coming in for recces,” she says.

“I love standing in an empty space with our production manager and crew. None of this works without them.”
Kilkenny X is in Kilkenny and online August 7th-16th, with further events coming this autumn. kilkennyarts.ie

Meanwhile in Dublin, Bewley’s Cafe Theatre, hit by a double whammy of the pandemic and the closure of its Grafton Street cafe home, has managed to pick itself up and dust itself off.

The lunchtime theatre reopens, carefully, for the month of August, with two socially-distanced lunchtime shows in the magnificent octagonal gallery of the Irish Georgian Society at City Assembly House on South William Street in Dublin 2.

As the country slowly opens back up, the long-established Bewley’s Cafe Theatre presents two of its most popular lunchtime shows, The Happy Prince and The First Pegeen, from August 5th.

The Happy Prince, perhaps the best loved of Oscar Wilde’s stories, is the bittersweet tale of a gregarious swallow who helps a prince alleviate his poor citizens’ suffering and learn profound truths about the nature of love and suffering. Michael James Ford’s performance, directed by Bairbre Ní Chaoimh, has had several sell-out runs in Bewley’s and toured Ireland and abroad. With a haunting new score performed by violinist Denice Doyle, it’s on August 5th-8th and 12th-15th.

The First Pegeen by George O’Brien is about one of the Irish theatre’s most endearing and enduring stories, the unlikely love between actor Molly Allgood, the first Pegeen Mike in The Playboy of the Western World, and playwright and Abbey Theatre director JM Synge. The play is a portrait of Molly (Aisling O’Mara, directed by Michael James Ford) on the day of her beloved’s funeral as she walks distractedly around Dublin, her mind a mix of memory and desire. It’s on August 19th-22nd and 26th-29th.

The Wednesday to Saturday live performances are all at 1pm, and less than an hour long. They play to a reduced audience with distanced seating. Afterwards audiences can enjoy Dublin Fragments: The Pearson Collection, curated by artist Peter Pearson, which forms a backdrop to the plays . The exhibition of architectural fragments and installations presents Dublin craftsmanship.

Tickets cost € 15 (by card online or at the door, no cash). Information on safety measures in the building at can be found here. Booking: bewleyscafetheatre.com086-8784001

The next episode of the Abbey Theatre’s Dear Ireland online project – a creative joy in the early days of the lockdown – continues at 7.30pm on August 10th, in a virtual “open house” of letters, poems and songs that express the many different hopes, experiences and challenges facing Ireland at this time. Following April’s mammoth 50 mini-productions online, Abbey co-directors Graham McLaren and Neil Murray asked their audience to write a letter, starting “Dear Ireland”, and talk to the nation about what it should be discussing.

“From Derry to Kerry, from London to LA, we received letters from all corners of the country and overseas. Letters in Irish, English, and Irish Sign Language.”

On Monday, 20 of these letters will be read from the Abbey stage – for watching online – by some of Ireland’s leading actors, interspersed by music from Damien Dempsey and spoken word performances from Lord Mayor Hazel Chu, Sabina Higgins, Minister for Arts Catherine Martin, and Irish Times columnist Fintan O’Toole.
Abbeytheatre.ie

Kabosh is going live too, in new EastSide Arts Festival show with The King of East Belfast at the Connswater Shopping Centre (August 7th-9th, and 12th-16th. Written by and staring local actor Stephen Beggs: “My father-in-law is called Clark Groves and ‘The King of East Belfast’ is based on the true life story of his grandfather, also called Clark Groves. Before gambling was made legal in Northern Ireland, Clark Sr was a legendary East Belfast bookmaker who strived to be both a successful bookie and a good man. Through his generosity to local people from what he called ‘this deadly business’, it was said that Clark Sr ‘married and buried them on the Newtownards Road’.”

This is a live, socially distanced performance with maximum audience of 22 per show.
eastsidearts.netand www.kabosh.net

The Music Quiz: What song did the BBC say was 'too depressing' to play
7

Collops and fíbíns: The lost language of Ireland’s landscape
9