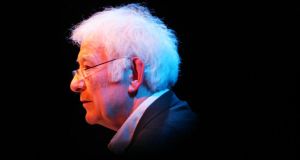 The crowd spilled out into the aisles of Cooper Union Great Hall in New York City to hear 20 American and Irish writers read the words of Seamus Heaney in a memorial poetry reading last night.

More than 1,000 people swarmed the hall in New York’s East Village to hear singer Paul Simon, novelist Colm Tóibín and poet Paul Muldoon among others – friends of the late Nobel Laureate who died in August – recite his poems.

Simon read one of his favourite poems, “Casting and Gathering,” from Heaney’s book Seeing Things about fishermen on opposing banks casting their lines, like politicians on opposing sides.

The singer said he heard Heaney read the poem on a visit to the Abbey Theatre in Dublin in 1991. He also read a haiku written by Heaney.

Pulitzer Price-winning poet Muldoon, a close friend of Heaney’s, read “Follower,” one of the many poems he wrote about his father and upbringing on a farm in Co Derry.

This subject was covered in the Glanmore Sonnets, two of which were read by Tóibín, including the couplet: “Vowels ploughed into other, opened ground, Each verse returning like the plough turned ground.”

Eavan Boland, a professor at Stanford in California, read The Singer’s House to the packed hall, describing the poem earlier as “a remarkably, daringly written poem.”

The poets spoke about how Heaney’s poems captured Irish rural life but transcended geography to offer a broad appeal, as witnessed by the large American crowd at last night’s memorial.

“There is a lot of rich, beautiful local and regional detail in his work but I think the reason people read it is for that strength of feeling that anybody can translate themselves into,” said Boland.

Heaney’s wife Marie and daughter Catherine attended last night’s event, which was organised by US poetry groups including The Academy of American Poets and the Poetry Society of America along with Heaney’s American publisher, Farrar, Straus and Giroux.

Alice Quinn, executive director of Poetry Society of America, said each poet had been asked to select three of Heaney’s poems to avoid overlap.

When submitted, there was no overlap between their favourite poems, showing the wealth and breadth of Heaney’s work, said Quinn, who worked when she was poetry editor at The New Yorker magazine.

“As a poet, he was loved because he was so scrupulously kind and generous,” she said. “He was a connector and generator for other poets, and he was a beloved teacher.”

Many of the poets reading last night told The Irish Times spoke warmly about Heaney’s gregariousness, inclusiveness and cheeky sense of humour.

“He had a backbone of steel, and also had a ferocity and a brilliant analytical intelligence,” said New York-based poet Tom Sleigh, a reader last night and a friend of Heaney’s for 30 years.

“All of that was tempered with the fact that he had the time of day for everybody. He could have been a very different man given his gifts and the demands on his time.”

The event is the first in a series of tributes to Heaney in the US. Actor Gabriel Byrne, author Colum McCann and playwright Enda Walsh will be among the participants in a tribute hosted by the Irish Arts Centre and St Ann’s Warehouse on Friday in Brooklyn, New York.

Irish ambassador to the US Anne Anderson is hosting an event in Washington DC on Sunday with Paul Muldoon to remember Heaney’s life and work.

Last night’s reading ended with a recording of Heaney’s reciting his own poem Bogland about the Irish landscape that closes: “The bogholes might be Atlantic seepage. The wet centre is bottomless.”