The Obama years gave artists little to rail against, and there’s plenty to suggest Trump is inimical to culture. Could his election spark a strong artistic response? 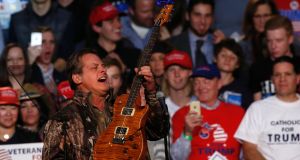 Ted Nugent performs prior to the arrival of Donald Trump and Mike Pence for their final campaign event of the 2016 presidential election. Photograph: Jeff Kowalsky/AFP/Getty

When Donald Trump was asked about his position on the arts during his campaign, his answer revealed a lot. He replied by referencing the decorative plans he had for his proposed wall between the US and Mexico: “I am going to have to add some designs to the wall because someday they might name it after me and I want it to look real nice.”

We should get more of a measure of the man when he hosts the traditional Presidential Inaugural Celebration in January. When Obama was elected in 2008, he had Stevie Wonder, Bruce Springsteen, Beyoncé, U2, Herbie Hancock and Pete Seeger performing as well as readings from figures including Denzel Washington, Forest Whitaker, Tom Hanks and Samuel L Jackson.

One of the few supporters from the music/film world Trump can count on for his inaugural celebration is Ted “The Nuge” Nugent, a guitarist who once described Barack Obama as “a subhuman mongrel”.

Following Trump’s election on Wednesday morning, the entire arts/cultural world, both in the US and worldwide, appeared to put the back of their hand on their forehead and visibly stagger under the shock.

But as we’ve seen under previous Reagan and Bush administrations, an authoritarian right wing presidency is capable of making art great again. Artists struggled with the Obama presidency as it was a relatively benign and liberal affair headed up by a culturally clued-in individual.

But on all the available evidence, Trump is not just uninterested in culture and the arts but is actively inimical to them.

Earlier this years, Art News magazine took a look at the US President elect’s past form. It found that Trump destroyed a pair of Art Deco reliefs that were part of the facade of the building which was torn down to build the Trump Tower – despite the fact that the Metropolitan Museum of Art desperately wanted the reliefs for its collection.

In 1999, Trump took exception to the Brooklyn Museum’s exhibition of Chris Ofili’s acclaimed The Holy Mary Virgin, which depicts the madonna in materials including elephant dung.

Trump told the New York Daily News that “as president, I would ensure that the National Endowment of the Arts stops funding of this sort . . . [Chris Ofili’s work] is not art, it’s absolutely gross, degenerate stuff”.

For Trump, good art is an expensive hotel. When he announced his plans for the Donald Trump hotel in Washington DC three years ago he said: “Friends of mine, they spend these ridiculous amounts of money on paintings. I’d rather do [hotel] jobs like this, do something that the world can cherish and the world can see and that everyone can truly be proud of.”

In the US arts funding is a local government affair, but it is mainly financed by the private sector. A president’s impact on cultural policy is minimal but, as with Charles Haughey here – who brought in a tax exemption scheme for artists, supported the establishment of Aosdána and helped create the Irish Museum of Modern Art – a political leader can have cultural clout.

In the past, Republican party voices have talked about either slashing funding for the National Endowment for the Arts (an independent federal agency which promotes culture) funding or even privatizing it. There have also been Republican calls to cut arts funding for art projects that “promote a gay agenda”.

With many newer US visual artists now working in the areas of immigration, diversity and activist movements such as Black Lives Matters, the battle lines seem to be drawn.

But a look at what the Republican presidency of Ronald Reagan did to the arts during the 1980s could lead you to believe that a Trump presidency will re-energise and re-motivate a moribund art world.

Heaven 17’s We Don’t Need This Fascist Groove Thing, the Valentine Brothers’ Money’s Too Tight To Mention (better known by the Simply Red cover), Bob Dylan’s Infidels album and Springsteen’s Born To Run were all written in direct protest to the Reagan administration.

But Reagan’s greatest musical gift was in hip-hop, where early names such as Gil Scott-Heron and Afrika Bambaataa trained their sights on the Oval Office.

Artists work best when they’re got something to work against: it was a personal antipathy to George W Bush that inspired some of Eminem’s best work. Short of the odd single issue campaign, music has been divorced from its radical roots for the past few years.

What seemed like the entire cultural/entertainment community were implacably opposed to Trump’s journey to the White House. But will tweeted words be parlayed into something of substance?

For the first time in eight years there’s an artistic focus, and a “basket of deplorability” to take aim at.