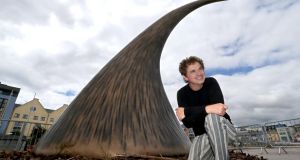 Patrick O’Reilly with his installation Thorn at his exhibition in The Shed at Galway Docks. Photograph: Joe O’Shaughnessy 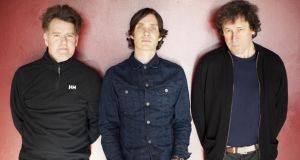 Giant inflatable crustaceans will cruise the streets of Galway today as the city kicks off its international arts festival, which runs over the next fortnight.

The “dancing lobsters” in personalised street carts are part of the festival’s free outdoor spectacle programme, which includes circus acrobatic show Hallali tomorrow and Thursday, a “monumental moving Dragonus” next weekend, and an enormous roving “RedBall” from Thursday to Wednesday week.

“The most kinetically crazy, charged, wild thing I think I’ve ever done,” Walsh has said of Ballyturk, which has sold out in the west but runs in Dublin’s Olympia Theatre next month.

Walsh, who has also written the script for a festival visual arts installation, Room 103, was joined at the opening by his cast of Cillian Murphy, Mikel Murfi and Stephen Rea.

Actors Pauline McLynn, Olwen Fouéré, Brendan Gleeson and his son Domhnall, playwright Martin McDonagh, Druid artistic director Garry Hynes and artist John Kindness were among those due to attend the performance at the Black Box.

The festival has two more world premieres tonight, with Druid’s Be Infants in Evil at the Mick Lally Theatre and Moonfish Theatre’s Star of the Sea at the Taibhdhearc.

Concerts by the likes of The National, The Waterboys and Imelda May will take place at the Big Top and other venues.

There is an extensive visual arts programme, with an exhibition of work by Brian Bourke and Jay Murphy being opened by poet Mary O’Malley at the Norman Villa Gallery in Salthill tomorrow night. The Connacht Tribune has provided its old printworks on Market Street for the main festival gallery, while sculptor Patrick O’Reilly is using the Shed on the docks. Janet Cardiff’s Forty Part Motet sound installation is on show at NUI Galway’s Aula Maxima.

The Fringe is also hosting workshops for children at the Galway City Museum.