Why Tony Award nominations couldn’t save ‘The Testament of Mary’ 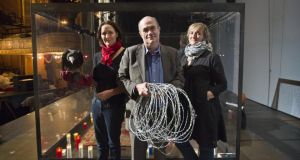 Nominated: Fiona Shaw, Colm Tóibín and Deborah Warner, with Pinhead, a vulture that appears in The Testament of Mary, which is up for the best-play Tony. Photograph: Joshua Bright/The New York Times

Some day, anthropologists from New Guinea will arrive to study what must be the world’s most peculiar cultural institution: the Broadway theatre. But had they arrived this week, they would have had a perfect case study with which to puzzle out its arcane practices and esoteric rituals. On Tuesday morning the nominations for this year’s Tony Awards, Broadway’s equivalent of the Oscars, were announced. A show with a particular Irish interest, Deborah Warner’s production of Colm Tóibín’s The Testament of Mary , got three nominations, including one for the much-coveted prize for best play. (The other two are for the lighting designer Jennifer Tipton and for the superb sound design by the Irish composer Mel Mercier). Within an hour, the word was out that the show, which was scheduled to run at least until June 16th, will close after tomorrow afternoon’s matinee performance. The lead producer, Scott Rudin, had decided to pull the plug.

I spent three years as a critic on Broadway, and I still can’t claim to understand it. But this strange conjunction of apparent success and utter failure functions as a microcosm in which some of its oddities can be seen with a reasonable degree of clarity. If you can grasp why a producer would close a show in response to the news that it has just been nominated for three Tony Awards, you can get some sense of how Broadway works. What you have to get your head around first, though, is that the show wasn’t pulled in spite of the Tony nominations. It was pulled because it got the “wrong” nominations.

The most basic truth about Broadway is that it’s about money. It is the raw, ruthless marketplace to which some people would like to reduce all artistic endeavour. It is a primal form of capitalism: enormous risks in pursuit of enormous rewards. The chances of a big, money-spinning hit are quite small. But the returns can be staggering. At the very high end – The Lion King or Les Misé rables – we’re talking about shows whose takings exceed the GDP of some small countries. Even for a drama, especially if it has a small cast, there is a lot of money to be made from a run of, say, a year.

But Broadway is a Darwinian world. A show has to find its niche in a complex ecosystem. A serious, linguistically dense play such as The Testament of Mary isn’t going to take on the big musical beasts. It has to fill a specific place. This is a position defined by William Goldman in his classic 1969 book about Broadway, The Season , as the Snob Hit.

On Goldman’s definition, the Snob Hit has three characteristics. Importantly, audience enjoyment or even understanding is not among them. It must be foreign, usually British. It must have great reviews. And it must be at least partly unintelligible: “The audience that goes to the Snob Hit must be convinced that the ‘average’ theatregoer wouldn’t understand it.” I would add another criterion: the play must be such that, if you haven’t seen it, you will feel left out of the conversation at an Upper West Side dinner party. If it presses these buttons, a play that is not ostensibly a hot commercial property can sell a lot of tickets.

Seen purely through this lens, The Testament of Mary had a lot going for it. It had the prestige of Tóibín’s name among American readers, combined with those of Warner and its performer, Fiona Shaw, among theatre cognoscenti. It is not British, but its Irishness is mixed with a high-toned English sophistication. And it is a conversation piece: demonstrations against “blasphemy” outside the theatre seemed so perfectly in tune with the requirements of the Snob Hit that a cynic might suspect – wrongly, of course – that they were part of the show.

But two things had to happen to turn these ingredients into a paying proposition. One was the reviews – or to be more accurate, the review. There is an iron rule: thou shalt not have a Snob Hit if the New York Times raveth not. It is not true that nothing succeeds on Broadway without the New York Times , as Andrew Lloyd Webber’s bank manager can testify. But in the special ecological niche that The Testament of Mary had to occupy, the Times review far outweighs all other opinions put together. And the Times critic Ben Brantley, while highly respectful of the text, was not enthusiastic about Warner’s frantically busy production.

This left one last chance: that Shaw would win the Tony for best leading actress in a play. Were she to do so, The Testament of Mary might escape from its Snob Hit niche and pass into another biosphere: that of the star performance. In this transition, the play becomes largely irrelevant, hence the odd reality that it doesn’t much matter that it has a chance of winning the best-play award. Shaw, who is a wonderful actor but not a Hollywood A-lister, would become a performer you had to see. Except, of course, that she didn’t even get a nomination. Result: no Snob Hit and no star power.

It’s a bizarre process, and it has very little to do with artistic values, except in reminding us why we in Ireland don’t leave theatre entirely at the mercy of the marketplace.

1:58 Children record their own messages of love at The Ark in Dublin