What is a ‘strong woman’? Isn’t our strength our complexity?

Writing my play ‘Helen and I’, I’ve been asking myself if women can’t also be vulnerable, needy, petty, destructive, self-destructive 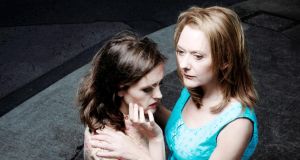 A few months ago I took a book called Irish Women’s Letters from the library and read about various Irish women, from various periods and backgrounds, in the letters they were writing to people around the world. I particularly enjoyed an account from a barely literate Irish woman in Australia. Her curiosity about events at home, the detail and memory with which she recalled friends, and her continued interest in local happenings were funny and moving to me.

I flicked to the back of the book, to the further-reading list, to see where I might learn more, but every title was a biography of a great man. There were many men (indeed many great men) listed – Joyce, Yeats, Wilde, Shaw – whose biographies I would happily read, but it struck me that apart from these epistolary glimpses I would never know the fuller stories of these women; neither the women attached to the literary men nor the ordinary woman emigrant. They were appendages in other people’s grand narratives, footnotes in the book of history. Feminist scholarship will fill some of these gaps; biographies can still be written of women from the past, but some things will be lost forever. This is old news.

And yet it’s as current as ever. Recently I took a class on feminism and autobiography in New York. The feminist writing associated with second-wave 1970s feminism in the US felt so contemporary and urgent to me, living as I do somewhere between the United States and Ireland that includes the internet. I became enamoured with the poet Adrienne Rich, among others, whose essays and poetry were saturated with images of women and what could be called female experience, yet often dark and damaged. A helpful line of hers was, “and seeing is changing”. Maybe, I thought, to look is to change. Or try to.

Rich also wrote: “Women have understood that we needed an art of our own: to remind us of our history and what we might be; to show us our true faces – all of them, including the unacceptable.” I don’t know about the idea of an exclusive art, but I am interested in showing some of our own unacceptable faces. I don’t know how to change certain men’s behaviour towards women. I’m not sure how to topple the patriarchy. One thing I can do is look at my own contradictions and complexities, and at those I see around me. Pick up on the screams that lie under the silences, the wounds incurred by the gaps in the texts and the exclusions from the first editions. Explore, too, the beauty and pleasure of being categorised female in the world. But, a voice inside me asks, shouldn’t I be writing “strong women”?

But some other I of mine replies, what is a “strong woman”? Is that not another form of idealisation? Can women not also be vulnerable, weak, needy, emotional, cruel, petty, controlling, manipulative, destructive, self-destructive, sometimes both victim and complicit in their own oppression? Is that not our strength, ultimately: our complexity?

I was 24 when I wrote the first incarnation of Helen and I, in 2013, which Druid Theatre opened in Galway this week. Old enough to have history – my own and a sense of national history – but perhaps not old enough to feel broken by it. I was lucky to have had a fairly normal existence, without too much evident reason for rage. And yet the two female lead characters in Helen and I, Helen and Lynn, are occasionally very angry, bitter, full of resentment.

I wonder where this anger comes from. Is it a cultural anger I’ve inherited? Drama is often about conflict, but it feels as if some of the anger is outside of myself, or the supposed demands of the form. Rich was annoyed at Virginia Woolf for couching her anger in style, for chiselling her sentences and paying more attention to lyrical cadences and wit; writing to be overheard by men. I like Woolf’s pleasing tones but I understand the argument. Are we not entitled to our anger? Must even a woman’s anger be nicely dressed in admirable sentences, lest it run the risk of being labelled hysterical? Hysteria is another gendered condition, at one time thought to be caused by a “wandering womb” (itself a hysterical theory).

Maybe we can reclaim “hysterical” by seeing its connection to humour. I love how feminism today embraces comedy. Laughing at ourselves, the world we inhabit and even our darkest capabilities can be productive; it can help move things. The brilliant African-American playwright Suzan-Lori Parks says to look at what happens to the body when it laughs; it’s almost the same as when it throws up.

I don’t know if any of this precisely pertains to Helen and I, as writing is, for me at least, a partly subconscious process, but these are some of the things that swirl around in my head. Still, characters are not ciphers; I don’t have a clear “message”. The idea that women should be representative of anything on stage, or anywhere, is another trap. But one thing that seems straightforward is that if we are not afforded dignity, space to speak, and the right to our own bodies, histories, darkness and desire, then that desire turns inwards and begins to warp, harden, make caustic what are natural responses to sometimes unnaturally restrictive conditions. In a centenary in which we are talking about history, freedom, independence and violence there is also room to look at those ideas from other slants.

Although I never set out to write about these things, some questions resonate. What does it mean to be free? Are any of us ever independent or are we always constituted by other people? Where does violence live in our lives, in our language, in ourselves?

Helen and I ends at the Mick Lally Theatre, Galway, this weekend and opens at the Civic Theatre, Tallaght, on September 27th as part of Dublin Theatre Festival