Welcome to Night Vale: a weird town where every conspiracy theory is true

One of the world’s most popular podcasts mixes NPR, Twin Peaks and The Onion. Co-creator Jeffrey Cranor explains why they’re taking it on the road 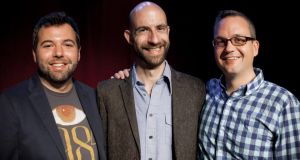 ‘A friendly desert community where the sun is hot, the moon is beautiful, and mysterious lights pass overhead while we all pretend to sleep. Welcome to Night Vale.”

If it seems like there’s something a little off with that introduction – this Night Vale place doesn’t strike you as an obvious holiday destination – your hunch is confirmed with the local tourist board’s ominous slogan. Proudly referencing the toxic levels of radon gas that abound, it proclaims: “The view is literally breathtaking.”

Luckily, Night Vale is a fictional town drawn from the minds of its writers and creators, Jeffrey Cranor and Joseph Fink, rather than a real-life clandestine community tucked away in a corner of Area 51. Welcome to Night Vale, the bimonthly podcast that has grown exponentially since its launch in June 2012, offers monthly news dispatches from a community where all is not what it seems. The pilot episode alone nonchalantly mentions mysterious hooded figures in the dog park, angels in the car lot, a waterless waterfront recreational area, and a team of scientists led by the charismatic Carlos, who arrive on the scene to perform tests on the strange town. Later episodes introduce characters such as the Faceless Old Woman Who Secretly Lives in Your Home and Hiram McDaniels, a five-headed dragon that contests the local mayoral election.

Cranor and Fink have backgrounds in theatre. They previously collaborated on writing a play in New York, where they have been based for the last few years. Cranor laughs when it’s suggested that his own childhood in Dallas, Texas, might have inspired the happenings in Night Vale.

“It’s funny, because neither Joseph nor I grew up in a small desert town, but we grew up on the east and west borders of the southwest desert in the US, so we both had an outside corner view of it all,” he says. “Night Vale has that Simpsons Springfield quality, in that it’s deliberately not mentioned as being in any specific place. We wanted to make it a little more universal.”

“The original concept was, if you had a town where every conspiracy theory were true, and you’d just go on from there,” he says. “Somehow, along the way, I think both of us sensed that we were bringing in elements of horror and poetry and even fantasy – kind of surrealist, David Lynchian type stuff. I definitely grew up reading quite a lot of Stephen King, and I read a lot of comic books, too, so the idea of supernatural powers, or a supernatural world that was natural to the reader, was something that I’ve always liked a lot.”

Within four or five months of the podcast’s launch, Night Vale characters began showing up in cosplay at Comic-Cons. Fan-made Tumblrs played a huge role in spreading the word. And last year, it overtook NPR’s This American Life as most downloaded podcast for a period.

A little further down the line, the success of their first live shows in San Francisco planted the seeds of the idea that touring Welcome to Night Vale might be possible. The show that will come to Dublin next month has been tailored for a live audience, and it retains its regular musical segment (or as Night Vale inhabitants tuning into the news may know it, a weather report) featuring British musician Mary Epworth.

“It’s not a stage play, more a live theatrical event,” says Cranor. “We decided early on that we weren’t going to muddle the stage by building scenic design and flying helicopters and swinging chandeliers . . . but we also didn’t want to just sit people at a table hunched over a microphone. And Cecil [Baldwin, who voices the three-eyed narrator, also called Cecil] was so good that we found out very quickly that Cecil is the set design; he is the lighting design; he is all of those things and he’s really tremendous at it.”

Baldwin’s voice and input have been an integral facet of the live show and the podcast’s success, says Cranor. “He has a real knack of bringing the audience in with him and getting the audience to respond to him.”

With more than 50 episodes in the can, Cranor says that there’s no indication that Welcome to Night Vale will run out of either steam or storylines. There is a freedom in the podcasting platform that allows them to take risks, which TV shows and films often don’t have.

“We said at the beginning that we can do whatever we wanted, as long as we made the show on a strict schedule and we held the continuity; that we were true to the universe that we were creating,” he says. “We have general thoughts about where we want it to go, but unlike a TV show, there’s no definite end date. There’s no point where we’ve said, ‘This has to end’, or ‘This has to have seasons to it’. We don’t need to wrap up a giant storyline every year, so if Cecil responds to something as an actor, we can write for that.”

With the live show performing well, a novelisation of the world of Night Vale has also been completed and will be published next year. He concedes that there is also potential for the podcast’s offbeat world to translate to the screen. For now, though, Cranor is happy to remain a poster boy for serial fictionalised podcasts. Are these the new radio soaps?

“I’ve enjoyed making Night Vale so much, and I’d love to see more things come along so that there’s a wider band of different qualities and styles of shows,” he says. “Podcasts, in a way, are home-made: you don’t need a whole lot of fancy equipment, hosting is very cheap, and so I think it’s just a matter of finding the people who are writing fiction for voice.

“Also, I don’t know if there’s so much money in it that any radio stations or the corporate world is saying, ‘We need to follow up and do what Night Vale is doing’,” he says, laughing. “I don’t think that it’s an amazing investment, but it’s been incredibly rewarding for us to see people all over the world respond to the strange little world that we’ve created.”

Welcome to Night Vale is at the Olympia Theatre on October 16, and The Sugar Club on Oct 17

The Funeral Murders: ‘They were like hyenas ripping their kill apart’
10