Was a travel blogger stalked around the world by someone copying their work?

A plagiarism row over a travel blog is hardly headline news. But it does show how facts are not as important as the number of followers you have 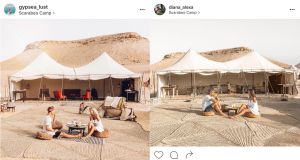 The Gypsea Lust blog and its alleged copy: was the storm-in-a-teacup non-story just another hoax?

In the final section of Jennifer Egan’s brilliant novel A Visit from the Goon Squad, Alex is hired by musician turned executive Bennie Salazar to find 50 “parrots”. These are paid “influencers”, pretending fandom in this instance, to promote a gig.

Egan wrote Goon Squad, which was published in 2010, in the years immediately following the birth of Twitter in 2006. It’s always salutary to read nihilistic future visions that have come true sooner than anticipated.

Last week, the Gypsea Lust travel blogger and Instagram “icon” (bear with me if you are not one of her 750,000 followers) caused a mini-internet storm that should, in an ideal world, only have existed in the imagination of some apocalyptic novelist intent on revealing the vacuous nature of our modern world.

Gypsea Lust, real name Lauren Bullen, is a 23-year-old, highly photogenic, blonde Australian who gave up her career as a dental assistant to travel the world. She hooked up with equally photogenic partner, Jack Morris, a former carpet cleaner from Manchester (Instagram followers: 1.6 million) to do this.

Morris and Bullen don’t seem to get bitten by mosquitoes, suffer from stomach upsets, get stains on their floaty white frocks (her), bicker or suffer from bad hair days – although he tends to use a bandana to obviate this threat.

What they do run the risk of is plagiarism. Last week, Bullen posted a blog entitled “Imitation is the Sincerest Form of Flattery”, in which she shocked the world by revealing a series of images by someone named Diana Alexa, who had followed in her footsteps, “Instagramming” exactly the same shots.

Yes, imagine: Alexa, it seemed, had recreated Bullen’s outfits and poses, and in some instances, had even recreated a version of Morris for those all-important couple shots.

Teen Vogue was outraged, while responsibly carrying the codicil: “If you ever encounter behaviour on the internet or social media that makes you feel uncomfortable or unsafe, never hesitate to report it and seek help.” The Daily Mail, Sun, NY Magazine and Cosmopolitan all carried the story.

Bullen was “horrified”. She was also “pissed off” and “freaked out”. “Stealing someone’s art,” she said, in her blog post, is “never okay”. You can’t check the veracity of this, because that post has since been taken down, as have Diana Alexa’s photographs, and her accounts have been closed.

So why does it matter that someone may have got a little bit All About Eve on what is essentially a marketing website? Bullen and Morris are sponsored by brands; as she says, she is “lucky enough . . . to work with many different clients to create unique content around the world”.

How this transmogrifies into her description of it as “art” is anyone’s guess, but it’s most likely that the storm-in-a-teacup non-story is a hoax. The easiest way to copy someone’s outfit so exactly, as Bullen wrote “even down to the anklets and necklace”, is to borrow it.

A look at the @Gypsea_lust Twitter feed shows Bullen and Morris sharing another perfect moment in Delhi with Alyssa Lynch, who bears a resemblance to Diana Alexa. They have denied that she is the same person.

Bullen said she was in contact with Alexa, and now wanted to "get on with my life", which is why she has deleted the posts. The plot, should you care, thickens, and the plagiarism story is as likely to be real as the perfect lives depicted on Instagram.

The real problem only becomes clear when we move on to the small town of Veles in Macedonia. And, no, we’re not following Bullen and Morris there; instead we’re looking at an internet cottage industry that has sprung up fuelled by a weak economy and the fact that teenagers are not allowed to work. As a result, they look for more “creative” ways to make money, such as Gypsea Lust, only this time with fake news, rather than fake perfect lives.

In Veles, they capitalised on the popularity of stories about Donald Trump in the run-up to the US elections. As the election results ultimately proved, all publicity is good publicity, and Trump was as media-friendly in his series-of-shocks soundbites as it was possible to be. The election also shows that if enough people are saying something (#HillarysHealth, #HillarysMigrants anyone?) it takes the place of truth.

What they discovered in Veles was that by adding Trump to the per-click monetising that Google Advertising can bring, coupled with Facebook’s capacity to generate shares, truth doesn’t matter.

In fact, the more outrageous the story, the more shares you are likely to get. In the lead-up to the election, the citizens of Veles had created between 140 and 150 US political websites, with names such as USConservativeToday.com and USADailyPolitics.com.

Those behind the sites aren’t pro-Trump, but have just cottoned on to the fact that creating clickbait is highly lucrative. Headlines included the “news” that Hillary Clinton was to be indicted, Bernie Sanders was threatened to make him pull out of the race and Democrats were guilty of voter fraud. Some stories were made up, some plagiarised, and some, rather worryingly, were both.

We’re all divided, to varying degrees, between yens for high and low culture. Tabloid newspapers and late-night radio phone-in shows are today’s version of public floggings. But if Barack Obama was the first presidential candidate to unlock the power of social media, Donald Trump and his supporters are the first to realise that nuance doesn’t fly within the constraints of 140 characters.

Good writing gets us thinking, but vacuous fakes thrive when we let them do the thinking for us. We all bear witness to the results.

Whether it’s a “perfect life” on a beach or hate-ridden headlines, read what you like, but don’t mistake numbers of followers for truth.

John Boorman: ‘I have to take a measure of blame for Harvey Weinstein’