Unthinkable: Why is whistleblowing on the rise?

Whistleblowing is a form of disobedience ‘well suited to a society in which our lives are shaped by mammoth, impersonal, bureaucratic institutions,’ says political scientist Bill Scheuerman 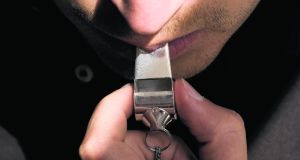 This has been the year of the whistleblower, with one story dominating domestic headlines more than any other. Disclosures within the Garda about the cancellation of penalty points, and the shoddy response initially to those concerns, led to the departure of both a minister for justice and a Garda commissioner.

The sense of disorientation so plainly experienced by the political establishment and law enforcement agencies is shared more widely in society.

Whistleblowing is a relatively new concept, and people are still trying to get their heads around it.

As political scientist Bill Scheuerman points out, “the phrase ‘whistleblowing’ does not even enter our language until the 1970s” when it was apparently popularised by the consumer rights advocate and former US presidential candidate Ralph Nader.

Scheuerman, who is based at Indiana University, is contributing to UCD’s Conscience Project, a research initiative inspired by recent events in Ireland and overseas. His paper on the ethics of whistleblowing was one of the most read in the journal Philosophy and Social Criticism this year.

“According to the empirical research, whistleblowing has become much more widespread in the past 50 years,” he says, yet our treatment of whistleblowers has barely evolved. We still expect them to be penalised for their “disloyalty”.

Scheuerman provides today’s idea: “The acceptance of punishment by those engaging in civil disobedience should not be seen as a precondition of its legitimacy.”

What are the earliest arguments in support of whistleblowing?

“The usual view is that whistleblowing refers to disclosures of harmful, immoral, illegal or illegitimate organisational actions, typically by members or employees of the same organisation. When understood in this way, it has been around for aeons. When Martin Luther nailed his Ninety-Five Theses to the church door in Wittenberg, attacking what he considered the church hierarchy’s immoral support for selling indulgences, he was a whistleblower, even if the term was totally unknown to him.”

Why is whistleblowing on the rise?

“In part because of growing sensitivity to the ways in which individual conscience can legitimately conflict with the imperatives of large public and private organisations. Also in part because of widespread scepticism about many of those institutions, including government bureaucracies and large corporations.

“Whistleblowing represents a form of disobedience well-suited to a society in which so many aspects of our lives are shaped by mammoth, impersonal, bureaucratic institutions, where it becomes extraordinarily difficult, and not just for outsiders, to identify who is responsible for dubious and sometimes harmful activities. Increasingly, we rely on whistleblowers to help us do so.”

Should the whistleblower be blamed for unintended consequences?

“Anyone who hopes to act in a morally responsible way should think hard about the possible consequences of his or her actions, and should also try to minimise possible ills. But it’s also true that no one can be realistically held accountable for all unintended consequences. For example, my wife and I have two daughters we love very much. Arguably, unintended consequences of our decision to have kids are further overpopulation and environmental degradation. But that hardly demonstrates that people should decide not to bring any more kids into the world.”

Are there steps that should take place before whistleblowing?

“The standard view is that whistleblowers should first exhaust internal organis

ational channels when they discover something harmful or illegal. Unfortunately, many of those channels are time-consuming or simply flawed, as was the case with Edward Snowden. He claims he did complain to his superiors, but he also believes that if he had been more aggressive in pursuing his case internally, he would have been fired and labelled a crackpot.”

To whom does the whistleblower, or indeed the citizen, have primary responsibility: the nation state or the international community?

“It’s easy to exaggerate the conflict between our national and global obligations. If a country takes its commitment to international human rights seriously, and most countries at least claim to do so, then there should not be much of a conflict between them.

“On the other hand, if a country discards international law, as Snowden believes the US has done by spying on its closest allies, things get messier. However, it’s important to keep in mind that many of the alleged illegalities identified by Snowden represent violations of both US and international law.”

Must whistleblowers accept punishment as the necessary cost of their actions?

“Accepting punishment can be an effective way to make sure people actually hear about the whistleblower and her revelations. But there is no principled reason why punishment is required. If a whistleblower uncovers egregious illegalities, it’s those who engaged in the harmful activity, and not the whistleblower, who should face legal sanctions.

“The sad truth is that even today, powerful government and business officials often get away with breaking the law, while whistleblowers lose their jobs and are quickly forgotten by the media and public.”