Unthinkable: Is the passing of time just an illusion?

A thought for the new year: how you perceive time has moral implications 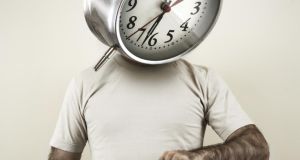 An individual’s experience of time can be very subjective

Another year gone: did 2013 go fast or slow for you? Or was it just the same as all the others?

An individual’s experience of time can be very subjective. Studies from psychology show our own sense of whether time is going fast or slow can vary depending on things such as mood, heart rate and a sense of engagement in whatever activity you’re doing.

Dr Rachel Msetfi, of University of Limerick’s psychology department, points out that people are “usually not aware of their experience of time” until there is a jolt to their routine “due to simply having fun, being bored, or experiencing some psychological change like depression, or even a pharmacological change, taking a drug, drinking alcohol or even coffee”.

In a recent paper, she studied the links between time perception, depression and feelings of helplessness. “There is lots of evidence from humans and animals that would put these very subtle changes in time perception down to biological changes, slowing or speeding of the internal clock, which could be due to changes in levels of serotonin and/or dopamine in the central nervous system.”

Research from the natural sciences is also adding to our knowledge of time. A study co-written by Dr Andrew Jackson, of the Department of Zoology at TCD, in the Animal Behaviour journal last September shows how different organisms experience time at different rates. Small-bodied animals with fast metabolic rates, such as flies and birds, experience time more slowly than large bodied animals with slow metabolic rates, such as turtles, the study concludes.

In addition, philosophers are grappling with the subject, among them Peter Simons, chair of moral philosophy at TCD. He continues a tradition stretching back to Aristotle asking questions not just about our experiences of time but whether it is, in fact, real.

Answering in the affirmative, equally for past, present and future, he provides today’s arresting idea:
We should be as morally concerned about both future wrongs and past wrongs as present wrongs.

Is the future determined in advance?
Peter Simons: “Philosophers have different views on this. Take two philosophers and you have got at least two opinions on your hands . . . Some philosophers think there really is no future – not that things aren’t going to come later but that the future is something that doesn’t exist.

“Others think it doesn’t exist yet, that the things that we are talking about in the future, like the next general election, will come to pass; it’s just we’re not there yet. And then there are others who think it is just there sitting in the future, waiting for us to, as at were, shuffle up towards it.”

Is it rational to distinguish between past, present and future?
“There have been two very different ways of thinking about time. Some people think – a lot of ordinary people and not just strange people like philosophers – that ‘past, present and future’ is a real distinction between three different aspects of time, that the future is something completely different from the past, and that’s something different from the present. That is anchored in the way we think, the way we act and speak. We have languages with tenses and so on.

Are the implications from this for how one might live?
“Most people think that your theoretical or conceptual view on time really has no impact on the way you view the world from a practical, or moral view. I take issue with that.

“If, like I do, you think all moments of time are equally real – past, present and future – then if you consider, for instance, past atrocities, and I don’t just mean things that happened in the last few years where you can punish the people, but let’s say the Holocaust or genocides going back much earlier, and if you think of future catastrophes, say earthquakes, flooding or the sea level rising and the awful effects that would have, then you should be morally outraged as much by things of the past and the future as you are by what is going on now. So future corruption and past corruption are just as bad as present corruption, for example.”

An unusual thinker in this field was John McTaggart who seized on the “unreal” nature as time as an argument for the existence of souls. How did he do that?
“Yes, it’s a somewhat odd view on souls because most people, when they think about souls, think about them as being conscious and having a succession of experiences – some pleasurable, some not – and a succession of course takes place in time. So McTaggart has to have a very different view of the nature of the soul from other people like Descartes or Aristotle or Leibniz.

“McTaggart’s view was that the passage from the future through the present to the past of everything was, first of all, absolutely essential to time. And, secondly, he had arguments, and I think quite good arguments, that if you examine it closely, that is a contradictory notion. So he drew the consequence that time itself is unreal.

“And therefore when you asked McTaggart ‘what are we?’, he would have to say, ‘we are not something in time; we are a kind of soul that is in a timeless communion with other souls’. Now that is a very un-commonsense view, but he arrived at it through a process of argumentation.”

Has thinking about time changed how you manage it?
“There are times when you want your timing to be good: when you step off a train you don’t want to miss a platform. But those are not things you need to reflect on from a philosophical point of view, they are everyday practical issues. As for time management, I don’t think either philosophers or physicists have anything to tell the rest of us. You’re probably better going to self-help books for that sort of thing.”