Unthinkable: His poetry’s great but could WB Yeats think straight?

Yeats engaged in ‘cultural mutiny’ against the encroachment of science 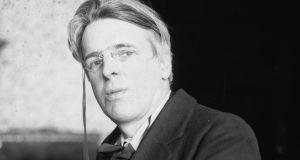 ‘Rational” is not the first word that comes to mind when you think of WB Yeats. He was a devoted follower of the occult, magic and astrology, and a romantic celebrant of fairies and unrequited love, but he had what George Orwell called a “fascist tendency” in the political realm.

Harsh words indeed, although Yeats unashamedly elevated imagination over rational calculation. As the late Thomas Duddy explained in A History of Irish Thought: “Turning away from what he calls ‘the scientific movement’ in literature, [Yeats] orients himself towards those things that natural science chooses to ignore or despise . . . This ‘love of the Unseen life’ is as much a gesture of cultural mutiny – a defiant gesture towards the encroachment of science – as an article of faith.”

This year marks the 150th anniversary of Yeats’s birth but on Thursday it will be the writer’s philosophy rather than his poetry under the spotlight at a World Philosophy Day conference at St John Fisher College in Rochester, New York.

“To the best of our knowledge, St John Fisher College is the only institution of higher learning in the US to continuously commemorate Philosophy Day every year; 2015 will mark our 13th such happening,” says Tim Madigan, associate professor of philosophy and director of Irish studies who selected Yeats as this year’s theme. Part of his inspiration was reading and researching the work of the Galway-based academic Duddy, who died in 2012.

Today’s idea is taken from Yeats’s analysis of identity. Although the poet took inspiration from philosophers such as Plato, he rejected the classical notion of a single self at the core of each individual, thus claiming: “Active virtue as distinguished from the passive acceptance of a current code is . . . theatrical, consciously dramatic, the wearing of a mask.”

Yeats is not normally associated with philosophy. Can he be placed within a particular 20th century school of thought?

Tim Madigan: “In a sense, Yeats transcends the various philosophical schools of the 20th century. Although often identified with mysticism, a better way of understanding Yeats is to consider him, to use Duddy’s phrase, as a ‘visionary idealist’. He questioned the prevailing scientism and rationalism of his age and their de-emphasis upon the irrational and the emotive.”

Can Yeats be seen as part of a broader Irish philosophical tradition?

“Since my first reading of Duddy’s book, a theme that continues to interest me is whether or not there is such a thing as ‘Irish thought’. In many ways, Yeats is the pivotal figure in Duddy’s exploration of the issue: an Anglo-Irish mystic, a poet, a playwright, a politician, a provocateur, and countless other attributes – but above all, an Irish thinker par excellence.

“It is fitting that Duddy was himself not only a noted philosopher but a poet of some renown. Like Yeats, he had a fine sense of the ambiguity of words, and the ways in which they can move us without our necessarily understanding their fixed meanings.”

Yeats believed there was an over emphasis on rationality in western culture. Can that claim be made even more so today?

“Like the American philosopher William James (a strong critic of scientism and positivism), Yeats had a fascination with the occult, especially seances and communicating with the dead. While rationalists like myself look askance at such things, it’s important to note that philosophy – from its origins in the cryptic messages of the Oracle of Delphi – has always been connected with otherwordly messages, so in many ways Yeats is well-connected with the philosophical tradition.”

How are you planning to commemorate World Philosophy Day?

“World Philosophy Day is a good opportunity to promote philosophical explorations and to show the connections that the discipline of philosophy has to many other areas which, all too often these days, it seems alien towards: sociology, biology, economics, political science, literature and so on.

“I am grateful to Tom Duddy and his continuing influence for leading me to Yeats as a touchstone for all that Philosophy Day entails. I am also glad that I will have the chance at the Philosophy Day event to read and discuss my own favourite poem by Yeats, Among School Children.

“In it, he waxes eloquent about the need to always remain a seeker of knowledge, mentions Plato, Aristotle and Pythagoras as fellow explorers of the relationship between the body and soul, and ends with the memorable lines, ‘O body swayed to music, O brightening glance / How can we know the dancer from the dance?’

“It is a poem I have read many times, and still don’t understand completely, which is all the more reason that I find it continues to move me.”

Having won critical acclaim in its London premiere two years ago, Socrates and His Clouds, a play by William Lyons, with homage to Aristophanes, is finally being shown in Ireland. UCD’s Dramsoc is staging it on Saturday, November 21st, at 4pm; and Monday, November 23rd, at 7 pm, the latter followed by a Q&A with Lyons, former head of Trinity College Dublin’s philosophy department. Tickets cost €10. Email UCDSocrates@gmail.com for bookings. The event is part of the 50th anniversary celebrations of the UCD Philosophy Society. Graduates and other sages are invited to email philosophy.society@ucd.ie to be informed of further events.

Question (from WB Yeats): “O Chestnut tree, great-rooted blossomer, Are you the leaf, the blossom or the bole?”

Plato replies: “If anyone comes to the gates of poetry and expects to become an adequate poet by acquiring expert knowledge of the subject without the Muses’ madness, he will fail, and his self-controlled verses will be eclipsed by the poetry of men who have been driven out of their minds.”