Young and Promising: millennials with a real lust for life

TV Review: ‘Young and Promising’ is lively and refreshing, but ‘Life of Kylie’ is dead inside 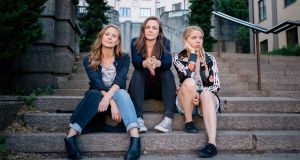 ‘Young and Promising’: light relief after such overwrought twentysomething dramas as ‘Girls’ and ‘Fleabag’

Sometimes, Walter Presents can be a bit like the Eurovision of dead women. The foreign drama arm of Channel 4’s on-demand website offers up hundreds of prone ladies from all around the Nordic region, as well as dipping into France and Germany for your delectation and douze points. The website, in its attempts to slake the insatiable thirst for Nordic noir, is a veritable production line of grim-faced detectives prodding lifeless female corpses in rain-sodden laneways.

Thankfully, its catalogue has recently expanded to feature other genres, and the latest delight is the frank dramedy Young and Promising (All4). Having already mastered teen drama with the highly acclaimed global smash Skam, Norwegian television now gives us an ennui-filled answer to the millennial maelstrom of shows like Girls and Fleabag.

It follows the lives of mid-20s mates: Alex is an aspiring actress; Nenne is a talented writer; and Elise is a would-be stand-up comedian, who, in the first episode, is seen returning to Norway from LA, although itching to make America her home. Reeling in disbelief that she’s ended up returning to work at the fish counter in her local supermarket, she constantly informs old friends that she’s “not really back” and floats through the first series in shocked denial as her familial problems explode and her romantic life spoils with regret.

Elsewhere, Nenne tackles the thorny issue of solely being viewed as a young female writer, informing two conceited dude-bro editors that to see her book through that limiting lens is to say that Moby Dick was just “a story about a whale”. Then there’s vivacious juggernaut Alex, who has to deal with being groped at an audition.

It’s not all grimness up Nord, though. There is the bubbling confidence and enjoyable brashness of shared first experiences, as we see the trio trying on life for size, tipsily cycling through the city, slamming shots of Fernet-Branca and screaming about Scooter in the everlasting sunshine. It could have easily been titled Young and Impossibly Fresh: everyone looks far too healthy even when drunkenly smashing kebabs into their gobs. Their faces are scrubbed as clean as the beautiful surface tops in their boho living spaces; and when they swear it sounds like the tinkling of church bells.

Whereas Girls felt overwrought and weighed down with its own sense of importance, Young and Promising is light and natural. There is none of the inconsistent characterisation or impossible privilege that often made Lena Dunham’s series unbearable. Young and Promising practically sings with youthful, lustful eagerness at the possibilities that life can bring.

If only someone would tell that to poor Kylie Jenner, who, at just 20 years old, seems as though she is completely dead inside. From beneath her anodyne Kardashianised face-mask she intones the most depressing marketing-team jargon about needing to be on social media 24/7 to “stay relevant”, sounding like a Chuckle Brother about to embark on a tour of Butlins with Shane Richie, rather than a millennial media mogul.

Life of Kylie (E!, Sunday 9pm) is the latest spin-off show focusing on the youngest half-sister of the original Kardashian fam. The joy of Keeping Up with the Kardashians is its banal blankness. In a world of terrifying unpredictability there is something comforting about knowing the show’s routine. In every episode, you’ll find Kim and one of her understudy siblings chowing down on their famed big salads, occasionally droning their oath of truth “bible” over and over, stroking the ends of their Yoko-length hair, as their death-ray eyes stare off into the middle distance. It’s almost spiritual.

The problem with Life of Kylie is that they want their plumped-up protege to actually do things. Any personality Kylie Jenner once possessed seems to have been completely eroded; just imagine the kind of insecurity being followed for 12 years would create. So rather than being fly-on-the-wall, the show is weirdly reminiscent of early noughties MTV fare.

It’s a megamix of Super Sweet Sixteen, Punk’d and The Diary of, even borrowing the show’s tagline “You think you know but you have no idea” for its social media promotion. So, we see Kylie setting up her friend on a blind date and taking a shy teen to his prom. There is also a protracted storyline about the horror of Kylie maybe having to take a commercial flight.

Its unappetising shallowness is served with a secret sauce of bleak unhappiness. Throughout the first two episodes Jenner tellingly reiterates that her sisters Kim and Kendall are “made for fame” and that “they look good every day”. She speaks wistfully about the Kylie from 2013 “before I got bigger” – she could be talking about both the changes in her popularity and certain body parts. The result of living a life of constant exposure is this sad awkwardness in her own skin that has caused her to become virtually unrecognisable, trapped on this treadmill, craving the attention that has been her lifeblood, enjoying the empty materialism of fame but mourning the freedom that anonymity gives.

It’s a morality tale that could end in revolt or at least abdication from reality TV’s royal family.