Diana: Charles ‘was all over me like a bad rash’

Diana: In Her Own Words is a Channel 4 documentary on her life and marriage to Prince Charles. Video: Channel 4 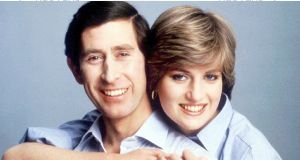 “Is that thing on?” asks a voice, off camera, before Princess Diana slips in front of it and into a pose that seems synonymous with her. Head cocked, chin down, large eyes up, she looks shy and vulnerable, guarded and watchful, and acutely aware that she is holding the frame. “Don’t touch it, Willie,” she says a few seconds later as Diana: In Her Own Words (Channel 4, Sun, 8pm) begins, “because it’s all focused on me.”

These candid recordings, controversially, come from her voice coach, Peter Settelen, who made them between 1992 and 1993, when Diana, newly separated from the feckless and eternally tetchy Prince Charles, was working on her “storytelling skills”. Everyone in Christendom is familiar with that story.

It is a behind-the-fairytale exposé, a riches-to-way-more-riches story in which a dazzled teenager is courted by the gauche future king. At the age of 20, Diana Spencer has the wedding of the century, before the eyes of the world, leading directly to an unhappy marriage with an aloof, unfaithful partner.

She bears him an heir and a spare. She suffers depression and bulimia. But she loves a crowd and it loves her. When they finally split, again before the eyes of the world, she finds validation in charity work and in front of the cameras. She dies tragically, with her lover in Paris, in a car crash, pursued by paparazzi.

Although it presents itself as a faithful, unmediated and scandalous airing of Diana’s perspective, director Kevin Sim’s documentary adds few revelations to that story. The morsels of intimate detail that it does contain have already been shucked out and served up: they met just 13 times before they were married; Charles’s courting techniques were bizarre; their sex life was almost non-existent; his infidelity with Camilla Parker Bowles was unapologetic; and “the Top Lady”, the Queen, was no help.

What it offers instead is something less heavily advertised and much more revealing. This is a documentary about the media, with Diana as its increasingly more canny protagonist. “Is that thing on?”

There is a sense running through the taped confessions, the interviews with her approvers and the archive footage, that this image-conscious young woman (“the fat Sloane Ranger” as she calls herself) can only see the world through a screen.

On Diana’s wedding day, her make-up lady recalls her watching the crowds on television, rather than through the window above it, then humming the tune to a Cornetto ad as her golden carriage arrives. More than the royals, who expect media coverage to be as intrusive as a curtsey, she is immersed in it, fascinated by it, and much better at manipulating it.

“Whatever ‘in love’ means,” says Charles, peeved to be asked out his feelings on his engagement. Most people take that as a sign of his callousness, his distracted affections. Actually, it seems mortifyingly honest: he doesn’t know what it means. Does Diana? In her post break-up interviews, she recalls his courtship in grimaces and recoiling gestures (“He was all over me like a bad rash”), speaking of the excitement of her flat mates but not her own, amazed by how little they knew each other. Yet, “I desperately loved my husband”, she tells Panorama in 1995, and nobody disputes that here.

Charles’s affair is cruel and entitled; Diana’s affairs are tragic and consolatory. “I want to be the queen of people’s hearts,” she will say in 1995, her story-telling skills greatly evolved for the new media age. Sim shares that appreciation for the soundbyte and the image – the Settelen tapes are edited to have Diana stare back at history, from the Faulklands War to the Aids crisis, without ever conveying the substance of a life.

“The British people need someone in public life to give affection,” she tells Panorama. (Beyond Diana, it’s revealing that “love” is only mentioned in coverage of the royals in the context of “nests”). Diana rises above it all: a refugee from a fairytale, a media icon, a queen of hearts, a media martyr. Even in death, she controls the narrative.