The 12 best unsung cult films from the depths of Netflix

Get your fill of cult horror, kung-fu, spaghetti westerns, Blaxploitation and whatever Troll 2 is 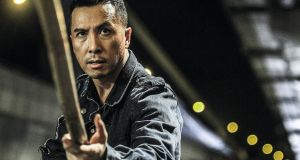 Kung-fu movies, spaghetti westerns, cult horrors, blaxploitation joints, direct-to-video action flicks, trashy thrillers and anything straight out of the grindhouse. These are the films that populate the deepest caverns of Netflix. The forgotten movies most subscribers barely notice when flicking through the streaming service’s catalogue, passed over time and time again for another episode of House of Cards.

Pity these great works that pad out the Netflix canon, for they are actually the films that make the subscription worth paying for. Netflix’s underbelly holds riches for those willing to tool up and journey into the mire. These 12 films are a good place to start.

The 36th Chamber of Shaolin

From the legendary Shaw Brothers Studio in Hong Kong comes one of the greatest kung fu movies ever made. Genre deity Gordon Liu plays a young student who seeks sanctuary in the Shaolin Temple after the Manchu government brutally suppresses an uprising in his hometown. Living among the monks, he learns martial arts by training in the monastery’s chambers. These sequences are brilliantly inventive, each chamber adding a new component in the hero’s arsenal.

The production design is lush and striking; the fight sequences, visceral and stunning. Start here before working your way through the Shaw Brothers’ blessed catalogue.

Sergio Leone may have defined the spaghetti western but hundreds more gun-slinging works were shot by Italian film-makers besotted with the mysticism of the old American West.

Take Giuseppe Colizzi’s Ace High. It was filmed in Spain and stars popular Italian double act Bud Spencer and Terence Hill alongside The Ugly himself, Eli Wallach. The film, the second part of a trilogy (don’t worry, though, you can jump straight in), is all steely-eyed cowboys, quick-on-the-draw duels and stab-you-in-the-back partnerships. Leone was the master, but this is a minor genre classic.

What’s this? Jason Statham does more than just crescent-kick fools? The Bank Job is based on the real life Baker Street robbery but with huge dramatic licence that allows sex snaps of Princess Margaret to be worked into the plot. Statham leads a group of cockney villains in a jolly into a bank vault that’s probably a little too slickly made for a heavily accented London 1970s heist flick. It’s a hell of a lot of fun, though, somewhat thanks to its leading man excelling in a less kinetic role than usual.

You don’t know Black Dynamite? The ex-CIA operative, Vietnam vet, kung fu master unleashes his own form of righteous justice to his local streets, all the while sporting the sharpest 1970s wardrobes this side of Studio 54. Devised by its star, Michael Jai White, this is a comedy that lovingly bends the knee to Blaxploitation movies. Shot in glorious Super 16 film, every frame gorgeously nails the genre’s slimy-grimy aesthetic, while Adrian Younge’s nasty soundtrack plays like a mixtape of lost soul and funk gems.

The Wayans Brothers worked out their template for mega successful horror spoof Scary Movie by first putting together this lampoon of 1990s hood movies. That franchise, and most of the siblings’ subsequent work, proved to be a grave sin, but Don’t Be a Menace to South Central While Drinking Your Juice in the Hood has a lot of laughs. It requires a knowledge of the hood movie genre to understand all the references, but it’s an amusing piece regardless.

Who could possibly match Bruce Lee? After The Dragon perished, martial arts cinema was rife with imitators. Stars with monickers such as Bruce Li and Bruce Le spawned a subgenre known as Brucesploitation. It was Jackie Chan who revitalised kung fu movies by mixing physicality with physical comedy – a counterpoint to Lee’s stony intensity.

Chan’s first major breakthrough was Snake in the Eagle’s Shadow, which established his comedic style. But Drunken Master – which follows a young student as he learns from an old mentor (Yuen Siu-tien) the art of fighting while totally hammered – went a long way to making him an icon.

In one of the roles that turned her into a 1970s Blaxploitation icon, Pam Grier goes on a roaring rampage of revenge when members of a drug syndicate murder her government agent boyfriend. As forceful as a double-barrel shotgun blast to the chest, Foxy Brown is sometimes difficult to watch. But the movie bristles with post-civil rights anger, feminist potency and the steely resolve of the black power movement.

Crashing on to the list of all-time great cinema serial killers is the hooded “martial arts maniac” who challenges and kills retired kung fu masters. Leave it to a fresh-out-of-jail master Hahou Mo (Hong Kong superstar Donnie Yen) to track the villain. Kung Fu Killer’s fight scenes are inventive – one takes place on a giant skeleton sculpture, another on a busy motorway – offering a reminder that when it comes to choreography and editing, nowhere does cinematic hand-to-hand combat better than Hong Kong. There are tons of industry cameos, too, and the film-makers even dedicated the movie to all those who uphold “the fine tradition of Hong Kong action cinema”.

One of the greatest rappers to ever walk the planet pitches up in Jamaica to immerse himself in Rastafari faith and record a terrible reggae album. We know now that Snoop Dogg’s conversion to Snoop Lion and dedication to a new religion did not stick. He dropped the name after the record’s cycle was complete and has caught heat from Bunny Wailer – former drummer for The Wailers and one of Reincarnated’s stars – for “outright fraudulent use of Rastafari community’s personalities and symbolism”.

Still, watching one of hip-hop’s most lovable visiting Trench Town, taking part in Rastafari rituals and smoking an endless amount of weed is undoubtedly enjoyable. Plus, Snoop gives a series of intimate interviews, opening up about the sometimes brutal path that brought him to Jamaica looking for fresh answers.

Pitching The Rezort probably took about three seconds. “It’s Jurassic Park, but with zombies.” This Brit flick takes that beautiful premise and doesn’t mess it up. A decade after humanity suppressed a zombie outbreak, a ragtag group of survivors visit a theme park where you can unload heavy weaponry at the undead for fun. There’s plenty of grisly action and ham-fisted social satire that keeps The Rezort swiftly moving. Plus, as far as I know, this is the first movie to introduce the concept of the undead right activist.

A lot of years have passed since Jean-Claude Van Damme enjoyed his place at the head table of hulking action A-listers. Classics such as Bloodsport, Universal Soldier and Timecop may have assured his place in the genre’s history, but JCVD hasn’t turned to politics just yet. These days he passes the time making mostly direct-to-video flicks. The super violent Six Bullets follows a broken-down, haunted by the past, “getting too old for this shit” mercenary as he attempts to track down a kidnapped American teen in Moldova. Basically, it’s Taken, but in a Belgian accent.

Troll 2 is in the conversation for best bad movie of all time. Every frame of this crazy thing just feels beyond the realms of possibility. You sit, you watch and you despair. The movie ends and you just stare at a blank screen. You rub your temples. Questions plague your every thought. Questions like “How?” and “Why?” Your chest tightens and your arteries close. The movie has infected your cerebrum. Things will never be the same again.

This cult classic – intended, for some reason, to be a smackdown to vegetarianism – follows a tribe of shape-shifting goblins that transform victims into plants so that they can eat them. Director Claudio Fragasso has always considered Troll 2 (which has no links to the first Troll movie) to be a piece with merit. If there’s one factor that links most so-bad-they’re-good movies, it’s that their creators were actually trying to create something legitimately great.