Yesterday I got 90 emails. Mostly junk

The late Ray Tomlinson founded a technology that’s great for sexually dissatisfied Hungarian farmers with multiple bank accounts. But for the rest of us it’s just email 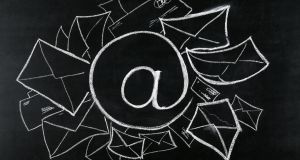 Email’s roots in the open web culture of the early internet mean it remains the only truly open system. Illustration Lisa-Blue/e+/Getty 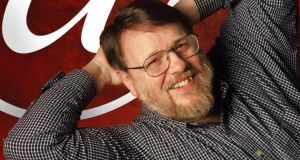 @ peace: Ray Tomlinson, the inventor of email, died this week at the age of 74. Photograph: Raytheon BBN

My phone pings with a text message. I check it immediately, as you do with text messages. “Any interest in writing a piece on the legacy of Ray Tomlinson, inventor of email?” writes the editor, adding: “Thought it best to text – more direct.”

Email has a bad name these days. No one person invented it, but Tomlinson, who died this week at the age of 74, has a cast-iron claim to being one of the founding fathers: it was he who settled on the previously little-used @ symbol on a standard keyboard as the best way to join the username with the destination address. And he sent the message in 1971 that is regarded as the first real email. Pressed repeatedly later on what this historic communication might have been, he couldn’t remember. I’m guessing “Test. Please ignore.”

Now that Ray is @ peace it seems a good time to consider the brilliant, liberating, life-changing, irritating, noxious, banal, soul-destroying, inescapable fact of modern life that is email.

When that first message was sent it travelled between two large computers, each of which probably cost hundreds of thousands of dollars. The PC was not yet invented, much less the smartphone, so practical applications for the new messaging system would remain limited or nonexistent for the vast majority of people for another two decades or so.

But by 1989 a New York Times article on “electronic mail” was predicting an imminent bright, glowing future. “Companies that have switched to electronic mail say the systems speed communications by avoiding telephone tag and ‘flatten’ organisations by permitting anyone to communicate regardless of rank,” it said.

“Advocates of electronic mail cite studies showing that it encourages workers at different levels of a company to communicate informally, cutting through layers of corporate bureaucracy, more than does the telephone or paper mail.”

And it all came to pass, pretty much as predicted.

In the 1990s PCs became more widespread and increasingly connected to each other, first within companies and then in the wider world. Many of the early internet service providers used email as a lure to gain users and to build traffic.

It’s hard to believe now, but email was sexy. Nineteen ninety-eight saw the release of the Meg Ryan-Tom Hanks romcom You’ve Got Mail (featuring a totally unrealistic version of what email looked like at the time). The world embraced this near-instantaneous communications system that did away with the need for fax machines, envelopes, stamps, trips to the post office, and talking to anybody else at work ever again.

By the end of the decade a small Canadian company called Research in Motion had produced a handheld device – the BlackBerry – that allowed you to send and receive emails at any time from anywhere. How cool was that?

Yesterday I received 90 emails, the first at 00.10 and the last at 23.50. Apparently I opened 25 of them (this seems a bit high) and replied to 10. The rest included the sort of digital junk that more organised people filter out in advance – irrelevant press releases, social-media notifications, special offers I stupidly signed up for, special offers I definitely didn’t sign up for . . .

For sexually dissatisfied Hungarian poultry farmers with multiple bank accounts this must be pure heaven. For the rest of us it’s just email. It’s not only the spam or the other junk that makes the contemporary inbox experience so bleak. It’s not even the gnawing feeling of guilt (that sense that you missed or forgot to reply to a message). Or the tonal anxiety that arises each time you hit “New” (am I being too jocular/formal; should I sign off with “Best”or “Regards”?).

For most people these days email is just one of a number of services we use to stay connected – arguably, too connected. Emails have played a large part in the blurring of the old line between work life and personal life. Try pitching a romcom on the subject these days and see how far you get.

Email is now officially old. Other technologies have come and gone around it (bye bye, BlackBerry), but it lives on, unloved yet somehow still indispensable.

In parts of the tech world they’ve been saying for years that email is dead. Teenagers never use it. For personal communications between friends and family it has been superseded by social media and instant-messaging services like WhatsApp and Facebook Messenger.

In the workplace new communications platforms such as Slack are being adopted by companies looking for more sophisticated tools.

No more tracking back through endless mail chains to try to figure out what the hell the conversation was about in the first place. No more passive-aggressive cc-ing to the boss when you’re having a fight with his underling. No more “Your mailbox has exceed its size limit.”

Slack’s chief executive, Stewart Butterfield, recently told the Atlantic magazine that it’s crazy for businesses to use email for so much communication. “With email probably 80 per cent of it is not coming from a person – and I don’t mean just spam,” he said.

Don’t write email off just yet, though. It still has a few real advantages. For one it has improved greatly over the years. Clean design and better functionality mean it renders quickly and easily on smartphones. And it’s still often the easiest and quickest way to share different types of files. Email newsletters remain surprisingly popular.

It has also become the default way to send and receive receipts for transactions, from shopping to taxi fares. And if you use Gmail then your account is hooked up to all kinds of other useful Google services that lock you into that company’s ecosystem.

Most of all, though, email’s roots in the open web culture of the early internet mean it remains the only truly open global communications system. Butterfield describes it as “the last great unowned piece of the internet”. That little @ symbol chosen 45 years ago means that once you have the right address you can send anyone a mail.

As the New York Times observed in 1989, it’s this destruction of hierarchy and opening up of access that was the defining feature of email, and it’s what still differentiates it from other tools. That’s why somebody is trying to flog me Kenyan chicken feeders, but it’s also why email retains its status as the universally accepted baseline communication tool.

“It may be called something else, it may be embedded within some other app,” Tomlinson said when asked about the future. “We may even abandon the protocols. But I don’t think it’s going away. Email is always going to have a place.”

Thirty books to look out for this autumn
6

Dylan Moran: ‘Smoking or breathing, one of them had to go’
9

‘There’s nothing to forgive’: Pete Best on being sacked from The Beatles
Real news has value SUBSCRIBE