What children learn from PewDiePie, Stampy and DanTDM

Anti-Semitic messages have been found in the videos of one of YouTube’s ‘Let’s Play’ stars. So how child-friendly are the hugely popular vloggers? 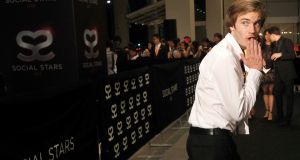 I’m watching a YouTube gaming video with my daughter and son, aged 10 and nine, in an attempt to better understand the phenomenon known as Let’s Play.

DanTDM, like most YouTubers, seems to communicate chiefly in sentences completed by exclamation marks! “Oh Jeez!” he says. “What the flip?” And “Let’s just eat a cookie!”

For the uninitiated – which includes me, along with most adults over the age of 25 – it’s difficult to understand why you would want to watch someone you have never met play a video game. But millions of people, mostly children and young teenagers, love to do just that.

In December, the Top 100 Most Viewed YouTube Gaming Channels amassed a total of 7,348,503,172 views, according to data compiled by Tubefilter and OpenSlate. The most popular of these can earn big money through Google’s AdSense programme, which allows them to get 55 percent of advertising revenues, while Google keeps the remaining 45 per cent.

PewDiePie is the reason the Let’s Play phenomenon was back in the news this week. Disney’s Maker Studios announced it had cut ties with the 24-year-old gamer (real name Felix Kjellberg) after it was revealed by the Wall Street Journal that he had posted anti-Semitic content in his videos, including a sign with the slogan “Death to all Jews”.

In response, YouTube cancelled plans for a second series of his reality series and removed him from its Google Preferred program, though his videos are still on YouTube.

PewDiePie, or Pewd to his many fans (he prefers to call his 53 million subscribers his “bro army”), claims that he used the anti-Semitic content ironically, to make a point about the “how crazy the modern world is”.

“The media wants to paint me as some sort of villain,” he moaned in a since-deleted video.

But it’s not just the media failing to see the funny side.

“The problem is that the internet loves, and feeds on, the ironic use of hate speech. Many YouTubers will claim that the content was ‘meant to be funny’ and ‘only a joke’. Hate speech is hate speech, whatever form it takes,” says forensic cyberpsychologist Dr Mary Aiken, author of the book The Cyber Effect.

She points out that Ofcom’s 2016 survey of children’s media habits found that one in three internet users between the ages of 12 and 15 have seen hate speech online.

“Disney dropping PewDiePie points to challenges major brands face trying to deliver on edgy online content that fits with their brand image,” she says. “The greater challenge is how parents can protect their children online. There is no simple solution to this problem, as the internet is currently not a suitable environment for children.”

These gamers are no longer fringe countercultural figures; their popularity has made them huge mainstream pop-culture influences

Even before the latest controversy, I had concerns about my children watching unfiltered content produced by young, almost universally male, gamers in their bedrooms. (Women account for roughly half of gamers in the US, but only 30 per cent of gamers on YouTube, according to a 2015 survey by YouTube and Ipsos MediaCT.)

I was uneasy about the language, attitude and views they might be exposed to, concerns that were encapsulated by the PewDiePie outcry this week.

These gamers are no longer fringe countercultural figures; whether they like it or not, their popularity has made them huge mainstream pop-culture influences. But some of them still seem intent on having their cookie and eating it.

“Parents do need to be aware that this content is not vetted or approved before it goes up there – and that’s not unique to YouTube. The agreement we’ve made in exchange for access to these free services is that there’s no burden of regulation of content by the platform,” says Simon Grehan, project co-ordinator at Webwise.

His advice for parents is to “communicate regularly with your kids, pass on your values, and stay engaged. Make use of the tools that are available, like the YouTube Kids app, which has more filtered content. It is a safety net, but you can’t rely on it completely.”

However, Dr John Sharry, a clinical psychologist, Irish Times columnist, and owner of the solutiontalk.ie website, advises parents to make the effort to inform themselves before making up their minds. For young fans, he says, watching a favourite gamer play can be like watching a football game.

“Even if you don’t get, sit and watch it with them in a non-judgmental way, and get the sense of what they love, and have that connection with it,” he says. “Discuss your concerns with your child, encourage them to think about and have a debate around it. Set some rules and boundaries around how you want them to engage with this content.”

But remember you have the decision-making power, he adds.

If I’m honest, I was mostly uneasy about my children watching these videos because I didn’t understand the appeal. So here I am, spending an evening with Dan TDM, whose content is aimed at a younger audience than PewDiePie’s.

His channel has more than 9.1 billion views and 14 million subscribers, mostly in the five-to-10 age group. He is so popular that there is a whole YouTube sub-genre about him, featuring titles such as “20 Crazy Dan TDM facts”. It’s all fairly harmless: Dan TDM is like a marginally edgier CBBC presenter with earrings and tattoos, whose tone seems carefully pitched to his young audience.

Lúí, aged nine, says he likes to watch it for the technical tips as well as the gamer’s personality.

I’m still not sure I get it. But then, my kids don’t understand why I watch TV cookery programmes either. As Dan TDM might say, let’s all just eat a cookie.

Don’t be fooled by the now-severed Disney connection: PewDiePie’s content is not for a younger audience. Recent uploads include a St Valentine’s Day special of a “genital jousting” video game, and another called “How Dirty Is Your Mind?”, featuring pornographic imagery and salty language. PewDiePie seems to spend more time talking about his media battles than playing video games.

Irish gamer Seán William McLoughlin – whose YouTube name comes from a childhood eye infection – greets his fans with a manic “Top of the morning to ya, laddies”. In the five years since he started posting high-energy videos, he has become one of Ireland’s most famous exports and yet, bright green hair notwithstanding, he could probably still walk down the streets of his home town of Athlone unaccosted. His language and choice of games – Shadow of the Colossus, Resident Evil 7 and Grand Theft Auto – make him unsuitable for under-18s.

The British cartoon cat better known as Stampy is voiced by Joseph Garrett from Portsmouth. Very family-friendly, and pitched towards the very youngest Minecraft players.

Another Irish option, and a better one for young children than Jacksepticeye, is LittleLizardGaming, run by twin brothers Ryan and Scott Fitzsimons from Ashbourne, Co Meath. Before they were full-time YouTube gamers, the brothers studied game development in college. They regularly appear in lists of the most family-friendly YouTubers.

Good for younger fans who don’t like Minecraft, 26-year-old Emile Rosales-Birou, aka Chuggaconroy, plays The Legend of Zelda, Xenoblad Chronicles, Splatoon, Super Mario and others.

Level 5 lockdown TV: From The Crown to Dead Still, the ultimate guide to what to watch
6