Weekend TV guide: 12 of the best shows to watch 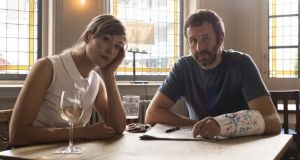 Rosamund Pike and Chris O’Dowd in State of the Union, Sunday night on BBC2

The Late Late Show
Friday, 9.35pm, RTÉ One
Sinéad O’Connor will be in studio to perform two songs, including the Pogues’ hit Rainy Night in Soho and one other special number, as the Late Late launches its 58th season. O'Connor will also talk with host Ryan Tubridy about her upcoming Irish tour dates and her recent return to music. Also: Maura Higgins of Love Island will discuss her meteoric rise to fame following her stint on the show. Credited with saving the series this year, Higgins will reveal her future plans and ongoing romance with Curtis Pritchard. This year’s Love Island winners – Limerick’s Greg O’Shea and his partner Amber Gill – will also discuss their time on the show. Plus: comedian Aisling Bea on writing, producing and starring in her own comedy series on Channel 4, This Way Up; Scottish singer-songwriter Lewis Capaldi performing his summer hit Someone You Loved and describing his spat with Noel Gallagher; magician Keith Barry messing with the minds of Tubridy’s guests; and a tribute to the members of Ireland’s frontline emergency security services who serve the citizens of Ireland on a daily basis.

QI
Friday, BBC2, 10pm
The long-running comedy quiz returns for another series, with Sandi Toksvig once more at the helm. For the first of the new run she is joined by panellists Loyiso Gola, Jason Manford of new sitcom Scarborough (see below), Sarah Millican and the quite interesting Alan Davies (who has been in every episode) to answer questions about quirky topics. As usual, the panellists will not necessarily be expected to deliver the correct answers, and Toksvig will be handing out points to those who provide the “most interesting” guesses.

Cuddly comedian Jason Manford stars as a comedian in this new comedy series. Mike has been on the road too long and so decides to hang up his mic and go back to his home town to try to have a normal life once again. This proves to be not to be as easy as it sounds, and Mike is going to need a big sense of humour to negotiate the pitfalls of family, friends and relationship. Unfortunately, his girlfriend Karen (Catherine Tyldesley) doesn’t find it funny when Mike is caught drunkenly kissing another woman behind the crab stand. She’s not taking his calls, so Mike will have to wait until karaoke night comes around to try to win Karen back.

Monty Python: Almost the Truth – The BBC Lawyer’s Cut
Monday, BBC2, 9pm
Hard to believe it’s 50 years since a bunch of university types got together and made a series that would have an indelible effect on popular culture. Michael Palin, John Cleese, Graham Chapman, Eric Idle and Terry Gilliam and Terry Jones were late 1960s mavericks whose mix of sketches, odd musical numbers and even odder animations struck a chord spawned a series of films and inspired countless other funny folk to follow in their footsteps. This documentary (first aired in 2009 to mark the Python’s 40th anniversary)

tells the story of the troupe, from their humble beginnings and first meetings, their influences and how their transition into movies, including Monty Python and the Holy Grail and the once-controversial Life of Brian. It’s followed by Python at 50: Silly Talks and Holy Grails.

Wentworth
Saturday, Virgin Three, 9pm
“Blood Wedding” is the first episode of series 7 of this popular Australian prison drama, Following Drago’s death, Rita and Marie (played by Leah Purcell and Susie Porter) are at war – a conflict that has remained cold thanks to Rita’s isolation. However, personal vendettas soon spill out into the general prison population.

“Mummy, what’s that strange man doing in our livingroom?” Actually, Dermot Bannon is not advertising a telco this time, but he is back for the 12th series of his ever-reliable house makeover series. He’ll be poking his head into people’s livingrooms, bathrooms, kitchens and bedrooms as he takes up the challenge of helping homeowners create their dream living space. Once again, Dermot’s biggest challenge will be persuading the finicky families and contrary couples that his design ideas are the best. In the first episode, Bannon is faced with a conundrum of a house, a quirky split-level bungalow that’s a design challenge on several levels. But that’s nothing compared to the garden – a confusing collage of terraces that slope up above the bungalow’s roof. There’s only one thing for it: Dermot will have to call in reinforcements, ie, garden guru Diarmuid Gavin. This will be the property equivalent of Batman and Superman joining forces to do battle with the evil Doctor Bog Standard.

State of the Union
Sunday, BBC2, 11pm
Chris O’Dowd and Rosamund Pike star in a new comedy series, and sure this won’t detain you long. Each episode flies by in a mere 10 minutes, but we’re assured there’s an hour’s worth of comedy gold packed into that small timeframe. The series is written by Nick Hornby, directed by Stephen Frears and stars Roscommon’s funniest fella, so we’re inclined to believe the Beeb that it’s “wonderfully well-written, directed and performed” and “funny, poignant, insightful, engaging and unique”. O’Dowd and Pike are Tom and Louise, who meet up in a pub prior to their weekly marriage counselling session. Now, the rules of disengagement say you don’t usually meet up with the enemy for a pint before going into battle, but we suspect the rules of attraction might still be in play here. Over each short episode, we delve deeper into the relationship, and piece together the circumstances of their break-up. This sounds like 10 minutes you won’t mind not getting back.

Treasure Island with Bear Grylls
Sunday, Channel 4, 9pm
What happens when you take a dozen Brits, plonk them on an uninhabited Pacific island, and leave them to face the toughest five weeks of their lives? At stake: £100k. They arrive with just what they’re wearing and have a day’s supply of water and a few basic tools, then have to face the dangerous southeast side of the island. However, they face a tough decision when a helicopter flies over and parachutes a box of cash on the north shore. Do they chase the money or make camp? Among the participants is ex-marine Marco. Will he go the distance, or will 75-year-old retired florist Irene prove more resourceful? And if they find the cash, will they share it with the rest of the group, or hide it and keep it for themselves?

This documentary takes a look at the discourse surrounding the political influence of Hungarian-American billionaire George Soros, who has been accused by online conspiracy theorists and politicians alike of attempting to sway elections and control immigration policies. The programme questions how Soros became a bogeyman around the world, and asks where the allegations about him have come from – and whether they have anything to tell us about the resurgence of anti-Semitism.

Virtual Sex: Adventures in Futureland
Sunday, Channel 4, 10pm
Jamali Maddix is a comedian and film-maker who meets extraordinary characters making a living in the digital era. In episode one of this new series, he investigates the sex industry in America, and meets the “cammers”, who perform directly for their clients via their laptops. In Las Vegas, he meets 30 women between the ages of 18 and 60 who work round the clock offering a range of services from simple friendship to assorted fantasies. Jamali also experiences the growing world of bespoke porn, where clients pay to produce and star in their own adult movies.

The Next Great Magician
Sunday, Virgin Three, 9pm
Stephen Mulhern and Rochelle Humes host a show featuring the world’s greatest magic acts. Each week, six illusionists display their skills, then decide between them which should go through to the final. In the first episode, Eric Jones performs some close-up magic with the help of Rylan Clark and Suzanne Shaw, comedy double-act Young & Strange bring along a furry friend to help with their performance, Jordan Gomez displays his manipulation act, Ines and Jonathan Goodwin both carry out terrifying escape stunts, and Xavier Mortimer combines magic, circus skills, music and comedy.