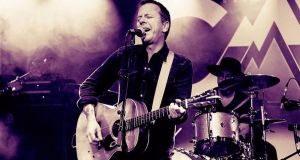 The Late Late Show
Friday, RTÉ One, 9.35pm
Everyone knows Kiefer Sutherland the actor, famed for his starring roles in Stand By Me, The Lost Boys, Flatliners and the cult TV series 24. But Sutherland is also a keen musician and will be treating the Late Late audience and viewers to a special performance with his eponymous band. He will also discuss his prolific acting career and working alongside his father, Donald. Also: Andrea Corr will be in studio to discuss the publication of her memoir, her motherhood journey, life and loss, and to reflect on her career as part of one of the world’s biggest bands of the 1990s with her three siblings. Plus: comedian Jack Whitehall on everything from his feelings of posh shame over Brexit to working with The Rock, Dwayne Johnson; show business couple director Stephen Bradley and actor Deirdre O’Kane on spending two years in and out of hospital as Bradley battled Stage 4 cancer and why moving back to Ireland saved his life; and former Ireland Rugby International Gordon D’Arcy and Paul Howard, journalist, satirist and creator of the ultimate rugby jock, Ross O’Carroll Kelly, on Ireland’s hopes Saturday’s match with the All Blacks, finding humour in the sport, and their new children’s book.

Still Open All Hours
Friday, BBC1, 8pm
David Jason stars in this follow-up to Roy Clarke’s popular comedy Open All Hours. Once the dogsbody, Granville has inherited the business from his miserly uncle Albert Arkwright, but he is not alone in running the shop – he now has his own assistant in the shape of his son Leroy, who proves more popular with the ladies than his dad ever did. Promised storylines promised include Eric and Cyril getting a little too close to nature while trying to impress their wives on a camping trip, and Gastric contemplating whether he would rather die than diet.

Arnold Schwarzenegger and Linda Hamilton (above), the original stars of James Cameron’s classic The Terminator (1984), tell Norton about reuniting for the latest in the series, Terminator: Dark Fate, which is produced by Cameron. Plus British chef and Bake Off winner Nadiya Hussain, iconic pop legend Debbie Harry, and music from The Sugababes.

Comedians and actors PJ Gallagher and Katherine Lynch chat to Ray about their dark comedy play Madhouse, currently touring. Also: From Big Brother to interviewing Hollywood A-Listers, This Morning’s Alison Hammond appears in the studio for her first ever Irish chat show interview. Plus: singer Brian Kennedy on his recent cancer-free diagnosis; comedian Andrew Maxwell on participating in the day’s mammoth London protests calling for another Brexit referendum; and Athlone jockey Paddy Merrigan on his rise to the top of his game, his downward spiral into drink, drugs and gambling and the turning point that led him to return to horseracing and spread his message of positive mental health.

Francis Brennan: All Hands on Deck
Sunday, RTÉ One, 9.30pm

Hotelier Francis Brennan has built up a nice little TV niche helping people get their hotels, guesthouses and restaurants up to scratch – and taking celebs on mystery tours. But now he’s really stepping out of his comfort zone and onto the high seas, joining the crew of the Regal Princess as it embarks on yet another Baltic cruise. Never mind the Baltics – Francis will be learning just what it takes to keep 5,000 holidaymakers happy as he steps into senior roles on board the ship: maitre d’, entertainment manager, general hotel manager. It’s sink or swim time as he tries to keep the ship’s seven restaurants running smoothly, organise the entertainment for the passengers, and oversee the running of the entire ship. “I was very nervous but I just got stuck in. My approach was that I was simply working on a floating hotel,” revealed Brennan. “Of course I had a few obstacles to overcome and at one point, for the first time in my life, I was actually speechless.”

As series two of the Barcelona-set thriller (original title: Nit i Dia) begins, presiding over a complex case is Judge Carles Vallejo. He encounters a witness willing to provide evidence incriminating politicians and business executives in a network of corruption involving money laundering. But they are prepared to do everything possible to prevent the truth from coming out. Before long, forensic pathologist Sara Grau (Clara Segura) is called in to investigate.

The former England International central midfielder explores the rise of veganism in football. He speaks to celebrity nutritionist Rhiannon Lambert, cooks a couple of dishes with Instagram chef Miguel Barclay, and spends a day at the first ever “vegan football club”, Forest Green Rovers. Along his journey, Jenas sees if he can incorporate a vegan lifestyle into his family life and goes head to head with vegan activist Ed Winters, as well as catching up with vegan footballer Chris Smalling.

News at Ten anchor Tom Bradby has been following the Duke and Duchess of Sussex every step of the way on their recent royal tour of southern Africa. And naturally baby son Archie has stolen much of the limelight. Bradby, who made two other films with Harry in Africa, speaks to them about the causes and issues they care most about. He also explores some of the challenges and pressures they face living as a young family in the glare of the world’s media.

Great Canal Journeys
Sunday, Channel 4, 8pm
Timothy West and Prunella Scales return to the Oxford Canal, the waterway where they first fell in love with boating more than 40 years ago. They travel north from Banbury, heading for the old canal port of Braunston, joined by their children. As they navigate their way through the beautiful Cherwell Valley, the couple look back at some their favourite voyages on the inland waterways of Britain and Ireland. As well as remembering great moments of joy and wonder, the voyage is tinged with sadness given the recent deterioration in Pru’s dementia.