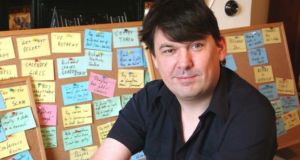 In recent years Graham Linehan has used the platform to critique what he calls “trans ideology”.

The Father Ted creator Graham Linehan has been permanently suspended from Twitter for breaching the site’s rules on banned words.

Twitter said the account, which uses the handle @glinner, had been suspended after “repeated violations of our rules against hateful conduct and platform manipulation”.

Linehan’s account was closed after he reportedly tweeted “men aren’t women tho” in response to a post by the Women’s Institute wishing their transgender members a happy Pride.

Following the suspension, a post credited to Linehan’s handle “Glinner” on the parenting website Mumsnet asked for support.

“I’m really sorry to barge in on you Mumsnettters with my problems, but I’ve been finally suspended from Twitter and I have a feeling they’re either going to ban me or just take my verified tick,” read the post, published at 3.16am on Saturday.

“I’ve submitted an appeal with Twitter and the Better Business Bureau but I thought I’d post here too so people knew what was going on.”

The post said Linehan had been locked out of his account and forced to delete tweets to regain access several times before. It said “trans rights activists” had searched through his old tweets and reported them.

It concluded by asking Mumsnet readers to “let people know it’s entirely down to malicious reporting from the usual suspects” and urged them to watch his YouTube channel and visit his “depressing blog”.

Linehan had hundreds of thousands of followers on Twitter. In recent years he has used the platform to critique what he calls “trans ideology” which he says misrepresents trans people and lesbians; and in 2018 he was accused of comparing trans activism to nazism.

In the same year, Linehan received a warning from West Yorkshire police after a row with the transgender activist Stephanie Hayden on Twitter, where she accused him of dead-naming – calling a transgender person by the name they used before their transition instead of their preferred name. – Guardian