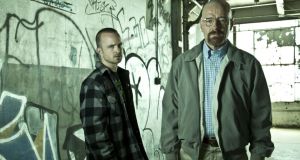 The TV drama series Breaking Bad, hugely popular with Irish audiences, has entered the Guinness World Records book for being the most critically acclaimed TV show of all time. Receiving a score of 99 out of 100 on an aggregate global critical scale, Breaking Bad overtakes the previous holder of the record – The Wire – which had a score of 98 out of 100.

One of the more remarkable facts behind Breaking Bad is that the only channel to screen it in Ireland or Britain is TG4, which broadcasts the show a couple of months after it has finished its run on US TV. Many Irish viewers watch it on Netflix which screens the show just 24 hours after it airs in the US.

Produced by the AMC channel, Breaking Bad has been running since 2008 and finishes for good at the end of this month.

The show is about a New Mexico chemistry teacher who, after being diagnosed with cancer, decides to produce and sell meth-amphetamine to pay for his medical costs and provide for his family. A beautifully executed exploration of the themes of crime and punishment, the show has kept viewers gripped with its vivid characterisations, whip-crack dialogue and engaging plot lines.

The Guinness World Records entry does not refer to viewing figures; it is a rating of its critical importance. Guinness looked to the review aggregation site Metacritic which produces an average drawn from reviews from “leading media publications” around the world.

Breaking Bad has been a slow burn. The first four seasons only attracted aggregate critical rates of 74, 85, 89 and 96 respectively, but this season five has a 99/100 rating.