The Sunday papers: From investigative brilliance to scurrilous gossip 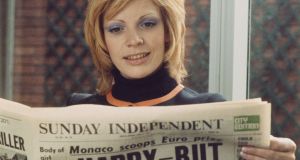 Revisiting another facet of the colourful history of print journalism in Ireland would hardly justify even a faint cry of “Hold the front page”. At least that’s what we thought when we began researching The Sunday Papers - A History of Ireland’s Weekly Press.

But as we combed through libraries and archives we quickly discovered that though the development of print journalism generally had been well mapped by scholars and memoirists, there was a dearth of any detailed history of that most Irish of newspaper genres, the Sunday paper.

Remarkably the same situation applied to our nearest island. With the exception of a small pocket-sized book of essays, Your Sunday Paper, edited in 1967 by celebrated British academic Richard Hoggart, there appeared to be no major studies dedicated to a newspaper genre that remains a powerful and persuasive moulder of public opinion as well as a consistent source of sharp investigative journalism.

That’s the high moral ground of the Sunday press; there is another side that does not smell so rosily; Sunday newspapers have been known to go to unacceptable lengths in their search for exclusives, the most notorious recent example being the hacking of deceased British teenager Milly Dowler’s phone which in turn led to the ground-breaking Leveson Tribunal and the demise of the News of the World in 2011.

While there were occasional Irish titles such as the Sunday Gazette (also confusingly known as the Oracle), which was printed in Dublin from September 1796 to April 1797; the oldest Sunday newspaper in these islands, and probably in the world, is the Observer which was first published in London in December 1791 and was, in varying degrees, a scurrilous gossip sheet, government propaganda rag and provocative thorn-in-the-side of the establishment before becoming the sober title of which you know today.

But the Oracle/Gazette was not too far behind its London cousin. However, the title did not herald a glorious age of Sunday newspapers. In fact, the 19th century is notable for the absence of Irish titles. One of the few exceptions is the Sunday Freeman, an offshoot of the Freeman’s Journal, which was published between January and August in 1817.

The delay in Ireland developing an indigenous Sunday news market can be attributed to a number of factors: unlike Britain with its booming industrialised economy, Ireland in the second half of the 19th century was a predominantly agrarian society recovering from the devastation of the Great Famine (1846-49). In the space of 60 years the population of the island had fallen by almost half - from 8,175,124 in 1841 to 4,456,546 in 1901. And although literacy levels rose from 47 per cent to 75 per cent between 1841 and 1881, the strength of the local weekly press most likely obviated the need for a national Sunday press.

Certainly, there seems to have been no rush to create a native Irish Sunday press but as British Sundays, fuelled by the popular energy of the new journalism at the close of the 19th century, began to circulate in Ireland, it must have dawned on Irish publishers that a Sunday publication might prove a valuable investment. But the idea of newspapers reporting gossip, scandal, crime, and conducting investigations was one far removed from Irish journalism at the turn of the century as such topics were taboo and the publication of such stories in imported British titles was viewed by the Catholic Church as contributing to the moral degeneration of the local population.

However, judging by their sales, many Irish readers did not agree. By 1910, British Sunday newspapers were reportedly selling between 80,000 and 120,000 copies a week in Ireland.

It was clearly a feverish atmosphere that would lead to actions such as the burning of newspapers, calls for import bans and actual bans. William Martin Murphy, however, saw that there was a gap in the market for an Irish Sunday. And so in 1905 he launched the Sunday Independent.

The time seemed right for more Irish titles. It wasn’t. Apart from the short-lived reappearance of the Sunday Freeman (1913-1916), no other Irish title attempted to enter the Sunday newspaper market. (It must also be remembered that there were a number of weekly editions of national newspapers: The Weekly Irish Times was published from June 1875 to November 1941; the Irish Weekly Independent appeared between April 1893 and August 1960; and the Weekly Freeman’s Journal was published between January 1818 and December 1924.)

The market for Sunday newspapers was clearly booming

There was, however, no shortage of British imports and no shortage of buyers either. When minister for justice Kevin O’Higgins in 1926 set up a committee on evil literature, submissions from the likes of the Catholic Truth Society and the Christian Brothers outlined a colourful world of moral decay in which to quote a christian brother “the vulgar and the course, the suggestive, the unsavoury, the offensive, the smutty, the ill-smelling . . .” is endangering the “spiritualised Irishman”. The society also outlined circulation figures for British Sunday titles including weekly sales of the News of the World (132,444); Empire News (76,698) and Sunday Chronicle (46,188). In total they claimed that British Sundays sold 352,802 copies each week in the Free State. In comparison, the Sunday Independent sold a mere 83,399 copies per week in March, 1930. The News of the World would be banned until the early 1960s but British imports continued to be strong before the second World War intervened.

Then in 1949, the Sunday Press was launched. The Independent and the Press quickly entered a competitive arena and by the mid-1950s, both papers were selling strongly with the Sunday Press the first paper to sell over 400,000 copies with the Independent not far behind. The market for Sunday newspapers was clearly booming because the British papers continued to sell over 400,000 copies here each week.

The barely-remembered Sunday Review which was first published in 1957 was Ireland’s first tabloid newspaper. And the house from which it was published was none other than the staid and conservative Irish Times. The Review closed in 1963, while selling almost 200,000 copies, but the costs now threatened the survival of The Irish Times itself.

Within 10 years, another tabloid would have a much more profitable profile. The brash Sunday World ushered in the modern era of Irish Sunday newspapers, to be followed by a number of important titles including the Sunday Tribune and the Sunday Business Post.

In recent years, British imports have taken on another guise with the development of the hybrid edition in which a satellite Irish office produces stories and pages to insert into the master edition produced in Britain. Thus the Sunday Times, the Irish Mail on Sunday, the Irish Sun on Sunday.

It has not been possible to cover every title nor the full history of the titles we selected, but to tell these compelling histories we were fortunate in enlisting a number of leading academics and journalists, many of them members, as we are, of the Newspaper and Periodical History Forum of Ireland. These include Felix M Larkin (The Sham Squire’s Youngest Child: the Sunday Freeman 1913-1916); Ray Burke (The Sunday Press: De Valera’s ‘Irish-Ireland’ Weekly); Siún Ní Dhuinn and Regina Uí Chollatáin (Are You Getting It - the Sunday World); Mary Muldowney (The short and troubled life of the Sunday Journal); Pat Brennan and Brian Trench (The Tribune’s turbulent times); Kevin Rafter (A lightning rod for the anger and frustration that is out there: the Sunday Independent 1984-2012); Ed Mulhall (The business start-up: the Sunday Business Post 1989-2001); Michael Foley (The English just don’t get it: the Sunday Times in Ireland). In addition to being editors, we also contributed an introductory chapter on the role, character and history of the Irish Sunday newspaper as well as chapters on the Sunday Review (Breen) and the early Sunday Independent (O’Brien).

We don’t view the The Sunday Papers as anything approaching the last word on these important and distinctive mirrors of Irish life and the colourful characters who edited and who wrote for them. Rather we hope that this initial study will be the first of many. And we also hope that readers will enjoy reading these histories as much as we enjoyed researching them.

The Sunday Papers – A History of Ireland’s Weekly Press, edited by Joe Breen and Mark O’Brien, is published by Four Courts Press. The Newspaper and Periodical History Forum of Ireland annual conference takes place this year in NUI, Galway, on November 9th and 10th, where the theme will be “The Press and the Vote”. Prof Louise Ryan of the University of Sheffield will give the keynote speech on The Irish Citizen as an archive of feminist history – reading the past through a newspaper.