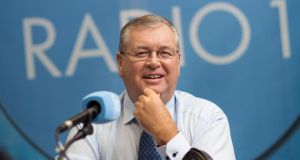 Liveline: Joe Duffy leads off by warning listeners who are eating to cover their ears, and rightly so

Welcome though summer’s arrival is, its impact on the radio world can be more ambivalent, from endless reports on the Leaving Cert to Marty Morrissey being given his own show. This week brings another reliably perplexing sign that summer is upon us, as the seasonal exodus of presenters kicks off in earnest. Ryan Tubridy, Marian Finucane, Pat Kenny and Ray D’Arcy are among those hosts missing, presumed tanned. It all leaves schedules looking threadbare and listeners feeling jealous.

Any vacation envy soon dissipates, however, thanks to Liveline (RTÉ Radio 1, weekdays). On Monday, after Ryanair’s call for restrictions on airport alcohol sales after a plane is diverted because of disruptive behaviour, Joe Duffy explores the issue further. He hears from callers who have suffered unpleasant experiences at the hands of inebriated passengers in planes, trains and automobiles.

The man intimidated other travellers before throwing up on Conor’s head and laptop, disabling the computer in the process. The vomiting voyager then passed out

The stories boil the blood and churn the stomach: Duffy leads off by warning listeners who are eating to cover their ears, and rightly so. One caller, Conor, recounts a Ryanair flight on which another passenger was allowed to board despite drinking heavily beforehand. This man intimidated other travellers before throwing up on Conor’s head and laptop, disabling the computer in the process. The vomiting voyager then passed out. The cabin crew weren’t too sympathetic. “They made me pay for my ham-and-cheese panini,” he says ruefully. Ryanair hasn’t even reimbursed Conor for the loss of his laptop.

It’s the kind of minor drama that Duffy thrives on, uncomfortable without being too grim. Accordingly, exaggerated expressions of mock disbelief abound. On hearing that Conor didn’t have a change of clothes after being puked on, the host sounds like a minor character from a Roddy Doyle novel: “Ah, mother of merciful . . .”

Conor’s experience triggers a succession of similar stories about drunken passengers. “Looking at the calls we’re getting, this is a problem, much bigger than I thought,” Duffy remarks. Paul from Dublin remembers a flight from Spain on which an Irish woman screamed at staff and spat on people while her husband passed out. Unsurprisingly, the flight was diverted and the couple arrested, although the woman performed a striptease as she was escorted from the plane. “The land of saints and scholars,” Duffy mutters, for want of anything else.

If this is how such people act in a heavily controlled airline environment, one can only wonder how they behave when they really cut loose in the likes of Malaga, Alicante or Ibiza, the destinations that feature heavily in these depressing tales. Duffy doesn’t pursue this theme, but he does hear of loutish antics closer to home. Therese explains that she avoids groups of young men with slabs of beer cans whenever she takes the train in Ireland. “As the train goes further west, the drink goes further south,” Duffy quips, but it’s a hollow joke. A seasoned rail traveller, Therese says she has “been on trains everywhere, but here is the worst in the world”.

By Tuesday, when Ray, a Kerry publican, tells of regularly turning away busloads of drunk and abusive Irish teenagers while polite foreign tourists look on, the tone of the conversation veers between despair and shame. It’s enough to make anyone think twice about going on a break. But not, it would seem, Duffy: come Wednesday, he too is off.

It’s not just loutish travellers who can upset holiday plans, however. On Wednesday Dermot and Dave (Today FM, weekdays) hear a former hotel maid describe the terrible revenge she took on a rude guest. Her voice is heavily scrambled in order to remain anonymous – and, one suspects, to fit with Dermot Whelan and Dave Moore’s urge to make every item self-consciously zany – but one can still make out the icky details of her tale.

In short, she says, having been upbraided for not cleaning a room soon enough, she wiped a resident’s toothbrush around a lavatory bowl. “I laughed and then thought, I hope she doesn’t get a bad mouth infection,” she says, to hoots of laughter from the presenters. The key to avoiding such a fate, she adds, is to be nice to the staff. Drunken holidaymakers take note.

Like almost everything on Whelan and Moore’s show, it’s a larky item, designed to raise a smile but little else. But the pair do tend to aim a bit higher than, well, toilet humour. Irreverent observation is their stock in trade, with one-liners that range from the zingy to the dodgy, occasionally at the same time. When a contestant guesses the answer to a long-unsolved question in the pair’s Ah Sure Lookit quiz, Whelan jokes that “it’s like getting a tenant out of the house”. Funny, but possibly not the most appropriate gag in the middle of a homelessness crisis. (The answer the presenters were looking for was “Overgrown weeds look unsightly”, which gives an idea of the quiz’s abstruse wackiness.)

But for all their blokey banter the presenters aren’t unreconstructed lads. They also talk to Grainne Conefrey and Georgie Bruinvels, who have developed an app to optimise women’s sporting performance during the menstrual cycle. As with most men, the very mention of feminine bodily functions seems to cause mild alarm in Whelan and Moore. Their incessant slagging is replaced by an uncharacteristic bashfulness, while they ask questions astute enough to impress their guests.

It may not be the most riveting radio ever, but it’s actually informative, as well as a change from the pair’s default daftness. If only everyone had the same sense of decorum.

Moment of the Week

On Wednesday Paul Williams, one of the hosts of Newstalk Breakfast (weekdays), foresees “more bad news for radio presenters” as the station’s business editor, Vincent Wall, tells him about a computer that can debate with humans. “More stress coming your way, Paul,” Wall says before adding that, “Hopefully, Newstalk management aren’t listening.” Never a man lacking a witty rejoinder, Williams replies: “I sometimes think Shane” – Coleman, his cohost – “is plugged in, he’s always so right.” Williams then bids farewell to Wall, noting that “if a computer comes in in your place, tell him he’s welcome”. Even a computer might be embarrassed by such leaden humour. Time for some reprogramming?