The Kettering Incident review: things get super-spooky on the far side of the world

Set in Tasmania, The Kettering Incident ought to be poles apart from the wanderlust mysteries we’ve become used to. So why does this moody work seem so familiar? 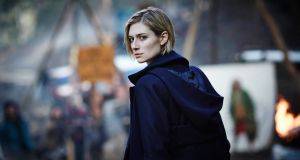 Together with Fortitude and the upcoming return to Twin Peaks, this makes the channel seem like a travel agency specialising in forbidding getaways. Geographically, Kettering and Fortitude ought to be poles apart, but viewers of mystery dramas will detect an air of familiarity.

In both shows the night sky leaps and bends with polar lights, shrugged off by jaded locals with the words, “It’s just the bloody aurora.” Now, there’s a humbling thought: how long before the wonders of this earth become just another nuisance?

Similar thoughts may haunt the more sceptical visitor to Kettering, whose main industries appear to involve logging, environmental protests, alien sightings and alien abduction merchandise. In 2000, two girls disappeared in the forest, among a swirl of lights which look like a search party rolling down a hill, and only one of them returned.

Now a London doctor, Anna is estranged from her family, her home and – in Elizabeth Debicki’s somnolent performance – even herself, with a tendency to “lose time”, waking up after blackouts, with glitchy flashbacks and nosebleeds.

After one such blackout in London, Anna wakes up three days (and presumably a couple of connecting flights) later outside Kettering.

Nobody is happy to see her. “This place is like the Hotel California,” says Chloe (Sianoa Smit-McPhee), an envious young girl with similar wanderlust. “You can’t leave, even if you do check out.” Chloe too has seen the lights and, like Kettering’s eerie supply of humongous moths, is drawn to them. Soon after, Chloe goes missing.

Written by Vicki Madden and directed by Rowan Woods, The Kettering Incident prefers the spooky effect of wind chimes to the clatter of action. Tasmania, more than Debicki, is its star, although a retreating one. Woods films in muted hues, suggesting a place blessed with stunning natural beauty but cursed with insufficient light to appreciate it.

The same goes for Debicki, statuesque and slumped, whose glacial blue eyes are the camera’s frequent focus, but whose tranquilised character communicates very little.

This is why, in torpid stretches, you may find your mind wandering to other television shows, as the show tries to triangulate its own position between Top of the Lake, Twin Peaks and The Killing – anywhere that the character of the place informs the tone.

Like the diffidence of its title, though, The Kettering Incident is so far shy to define itself, trailing the scent of a supernatural, political, sci-fi or detective drama. The real mystery is how many genres a single show can keep in play, before a globetrotting audience decides it would rather escape elsewhere.