The Joe Jackson tapes are revisited in new radio series

Interviews with Michael D Higgins, Gabriel Byrne and Bono will be aired on RTÉ radio 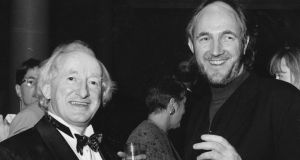 Michael D Higgins and Joe Jackson: In the interview, Mr Higgins highlighted his belief that culture can be a site of ideological struggle and that art can be used in a hegemonic sense.

These days Michael D Higgins is restricted by the Constitution and presidential propriety in terms of what he can say in public.

In 1993, however, he was minister for the arts, culture and the Gaeltacht – and at times came across like a terrier.

Gerry Adams, who during an interview with me accused Mr Higgins of “weeping for people in the Third World yet ignoring the suffering of people a couple of hundred miles from his doorstep”, had this accusation dismissed by Mr Higgins who said it was “nonsense” and “cheap”.

Higgins added: “I do not support the IRA and I do not accept that the IRA is in a direct line from the Independence struggle.”

When asked if he could be described as a republican, Mr Higgins gave a labyrinthine reply.

He recalled “taking part in a debate with people who said 1916 was a waste of time,” which he said he didn’t accept, saying his father and uncles had fought in the War of Independence on opposing sides.

He defined “republican” in its “finest, strongest sense” as “citizens operating in terms of equality and freedom outside of repression and in a socially-just society”.

Mr Higgins highlighted his belief that culture can be a site of ideological struggle and that art can be used in a hegemonic sense.

Five years earlier, I had discussed this issue with Gabriel Byrne, the subject of the second show in the Christmas series.

He had tested for the role of James Bond and agreed that the character is basically a crass embodiment of British imperialist, chauvinistic and phallic codes.

“He’s a cardboard character. So out-of-date it’s a joke. Spouting all that anti-Russian and pro-British crap. How could I play that role?”

Incidentally, Pierce Brosnan, who at that point was keen to be Bond, read that quote and later told me he “didn’t quite get what Gabriel was saying”.

Sadly, much of what Byrne said in 1988 still applies to the movie industry. At the time he was described as “Ireland’s first bona fide male sex symbol”.

He was fully aware that female sex symbols, such as Marilyn Monroe, often saw themselves as lumps of meat, processed, packaged and meant to serve mostly to feed venal fantasies – usually sexual.

“When I’m being filmed I don’t feel I am being used as fantasy fodder but, yes, that all is part of the territory,” he said.

Then came this telling exchange.

JJ: “How do you respond if you are confronted by a woman obsessed with your film image?”

GB: “I had a hard time dealing with a few women, who said, ‘You looked lovely in such a film. I fell for you.’

“Okay, it’s better than a kick in the bollix but it doesn’t mean a thing. I’ve gotten blatant invitations from certain women but I’ve never taken them up on it.

“Many of these women don’t know, or care, who you are, just that you were in a movie, so what’s the point?”

JJ: “Some feminists would see those women who you say made life difficult for you as ‘victims’ of the star-selling process.

“Many believe that the romantic hero, in particular, is used to reduce women to the role of passive fantasists.”

GB: “Yes. And that’s because most movies are written, produced and directed by men.”

JJ: “Do you ever regard yourself as being used in this process of control?”

When I arrived at Dublin’s Factory recording studio in May 1993 to get a world exclusive preview of their still-unfinished album Zooropa, Bono said he was in “an improvisatory mode”.

We then winged it for two- and-a-half hours. Afterwards he said, “My original plan was to just play the album for you, have a brief chat, then split. I had better get back in there [to the studio].”

But given that I had never interviewed Bono, hated the way he was deified by some in the Irish media and doubted the authenticity of his Christian base – it seemed at odds with their paean to eroticism, the Achtung Baby album and rumours of hedonistic excess during U2’s recent tour – I had lots of questions.

Bono rose to the challenge and impressed me deeply with his quest to articulate truth.

A few weeks later, after Johnny Cash read the interview, he told me, “You sure got Bono talking about religion in a way that I never heard him do before, at least in public.”

On that occasion in Branson, Missouri, Cash also gave me an autographed copy of a three-CD box set of his own recordings and said, “Thanks for helping me hook up with U2, and you were right to go with The Wanderer title.”

He was alluding to the fact that the U2/Cash record of the same name – which was included on Zooropa, and later led to Cash’s comeback – seemingly came about, in part, after I told Cash during a pre-Irish tour phone interview for The Irish Times that U2 were making Zooropa and suggested they could record together.