The ‘Game of Thrones’ tourists

How much is the hit HBO fantasy series worth to its home, Nothern Ireland? 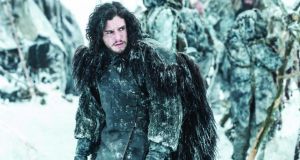 You know a TV series is big when politicians name-check it. Last week, the North’s First Minister Peter Robinson waxed lyrical about Game of Thrones (GOT), the HBO fantasy series whose third season has just begun on Sky Atlantic. Large portions of the drama have been filmed in Northern Ireland, and Robinson trumpeted the economic benefits – an estimated £65million – and welcomed the confirmation that series four will also be made in the North.

But will the economic benefits extend beyond the film and TV industry? “It’s been an incredible shop window for our most spectacular scenery,” says Moyra Lock of NI Screen, the government agency that has grant-aided GOT to the tune of £9.25 million. “From Tollymore Forest at the foot of the Mournes to the Antrim coastline, our countryside has never looked so amazing.”

Yet the closest thing to a rubber-stamped tour of the “Seven Kingdoms of Westeros” is a self-guided itinerary on the website of the Causeway Coast and Glens tourism partnership.

Perhaps the tourism chiefs are preoccupied with a GOT exhibition currently touring Toronto, New York, Sao Paolo and Amsterdam and due to open at the Titanic Belfast centre on June 8th.

“We really want to put it out there internationally that Northern Ireland is home to Game of Thrones ,” says Helen Carey of the Northern Irish Tourist Board. “Another aim is to stimulate our local private sector as to how they can come up with products and experiences to maximise on that association . . . The New York exhibition has already taken place and they got 5,000 visitors per day. We’re hoping for at least 13,000 visitors across the 10 days.”

Quieter projects are also in the offing. Phil Lowles runs TitanCon, an annual sci-fi and fantasy convention in Belfast. Its highlight this September will be a tour of GOT locations. However, Lowles says that the tourism potential is not being effectively tapped. “What we do at TitanCon is on a small scale; it’s a labour of love,” he says. “I would like to see someone launch a properly resourced coach tour.”

Moyra Lock says: “Since series three has begun, I think we will see the tourism initiatives following.”

WB Yeats, the Spanish flu and an experiment in quarantine
6